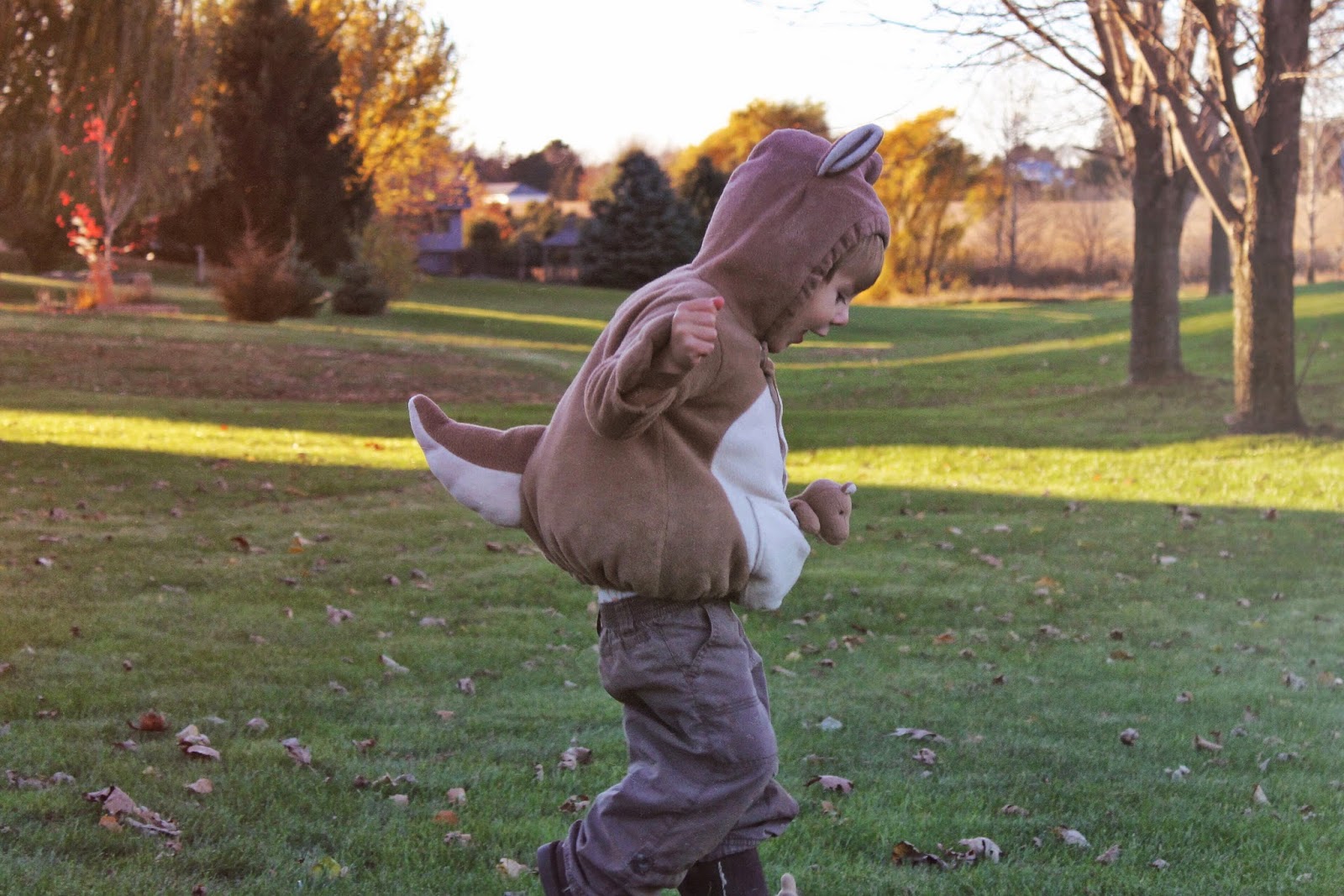 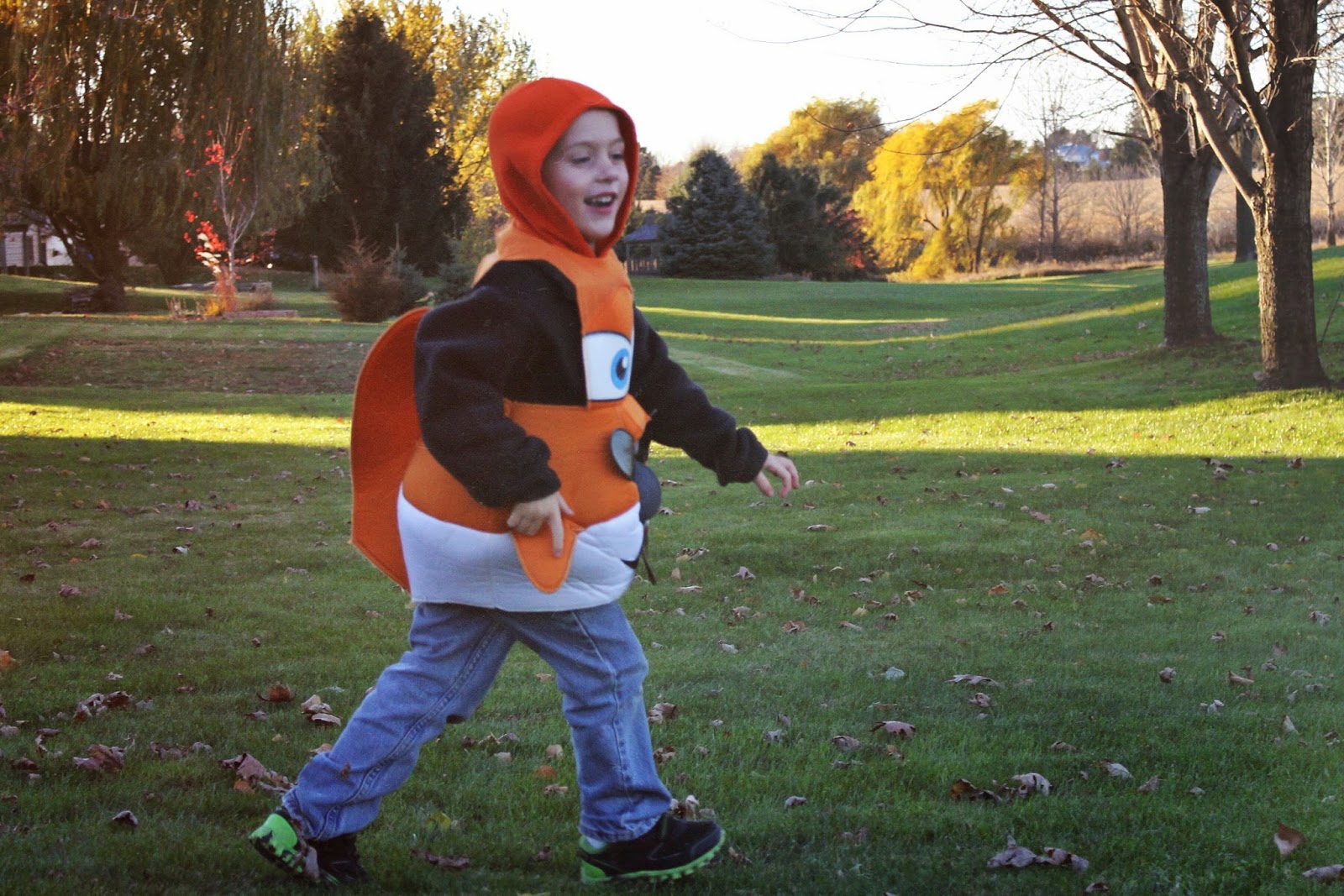 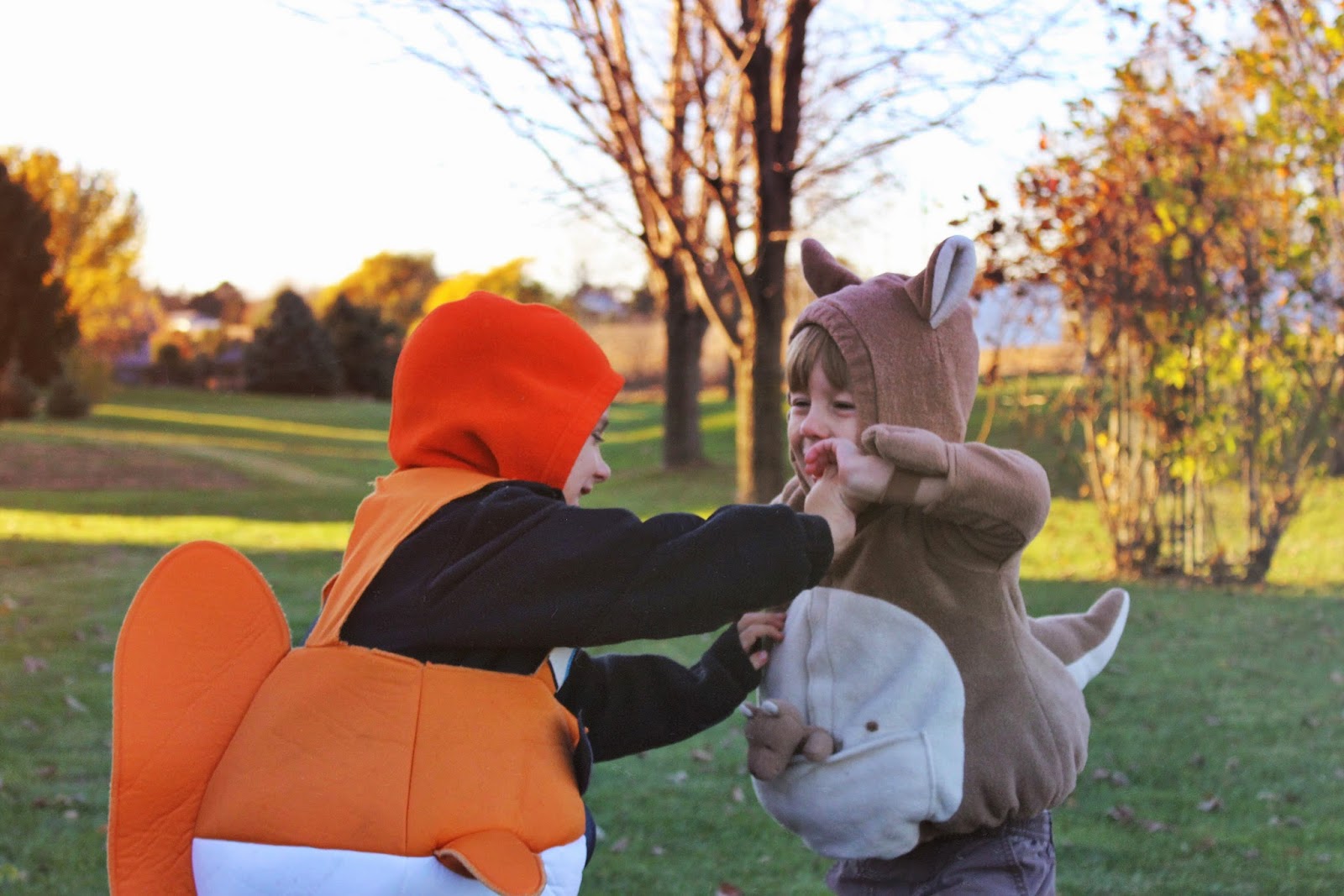 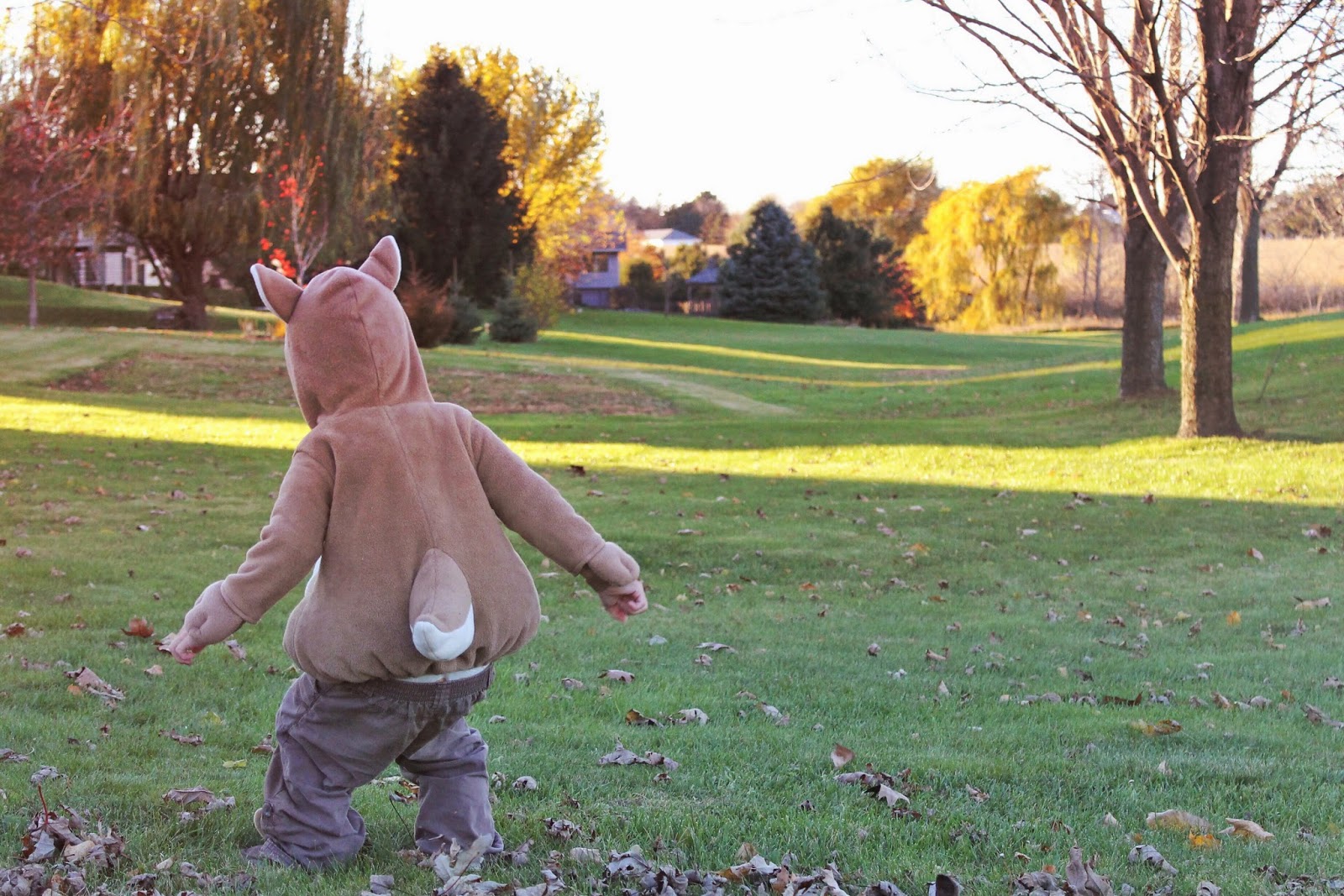 Three days into November and I had to de-Halloweenize my house. The ghosts. The skeletons. The scarecrows. The random bits of candy wrappers. The costumes. The neon vampire teeth. The orange plastic pumpkin buckets. The mummies and witches and other random decorations. It was a bit too much. I was OD'ing on the stuff I had crammed into our house only weeks ago.  Now with all the festive touches bottled up in a tote, waiting for next year's debut, I'm feeling much better.

Oh but how I love me some Halloween festivities!!

Early in the week we holed up in our house and threw ourselves a Halloween party. I dug up the old costumes and the boys each picked one they wanted to wear. Spencer chose one from a few years ago, the one he wore for his first year of preschool as a three year old: Lightening McQueen. And Ashton picked a mommy kangaroo costume, one a two-year-old Spencer first wore a week after Ashton joined our family back in 2009. The kangaroo was a tad snug on Ashton and the paws rested at his wrists, but he instantly fell in love with the thing, and they were pretty much inseparable. The selling point for Ashton was the little baby joey nestled deep down in the pouch. Look, a little baby kangaroo in my pocket!!! He wore that thing during naps and at bed at night. He wore it to drop off big brother at school. He wore it shopping at Walmart. In fact, he didn't want to stop wearing it, even when it was time to wear his actual Thomas the train costume later in the week.

So Lightening McQueen and Mommy Kangaroo joined me for a Halloween party early in the week. We played Pin the Nose on the Skeleton. We threw plastic creepy crawly spiders and bugs into plastic pumpkin buckets. We played Halloween BINGO. Well, Ashton sat through one game, where I tediously tore off the back of the stickers after each call, and then he dashed off to play whatever Mommy Kangaroos play while Spencer and I played a few more games. We rolled out cookie dough and stamped out ghosts and bats and gravestones and mummies. Then we frosted the cookies. Perhaps more frosting found its way to mouths than cookies.

Finally, I whipped up some homemade dirt, complete with gummy worms and plastic bugs and chocolate ball sprinkles and tractors, and away they played while I thought I could get some work done. In a different room. Where I couldn't see them. And they couldn't see me. Until I discovered what really happens when a supervisor leaves the room. Then I spent an enormous amount of time cleaning and cursing my stupidity. We ended our party that night carving a pumpkin with daddy--and Ashton wearing his kangaroo costume to bed, baby joey all snuggled in. 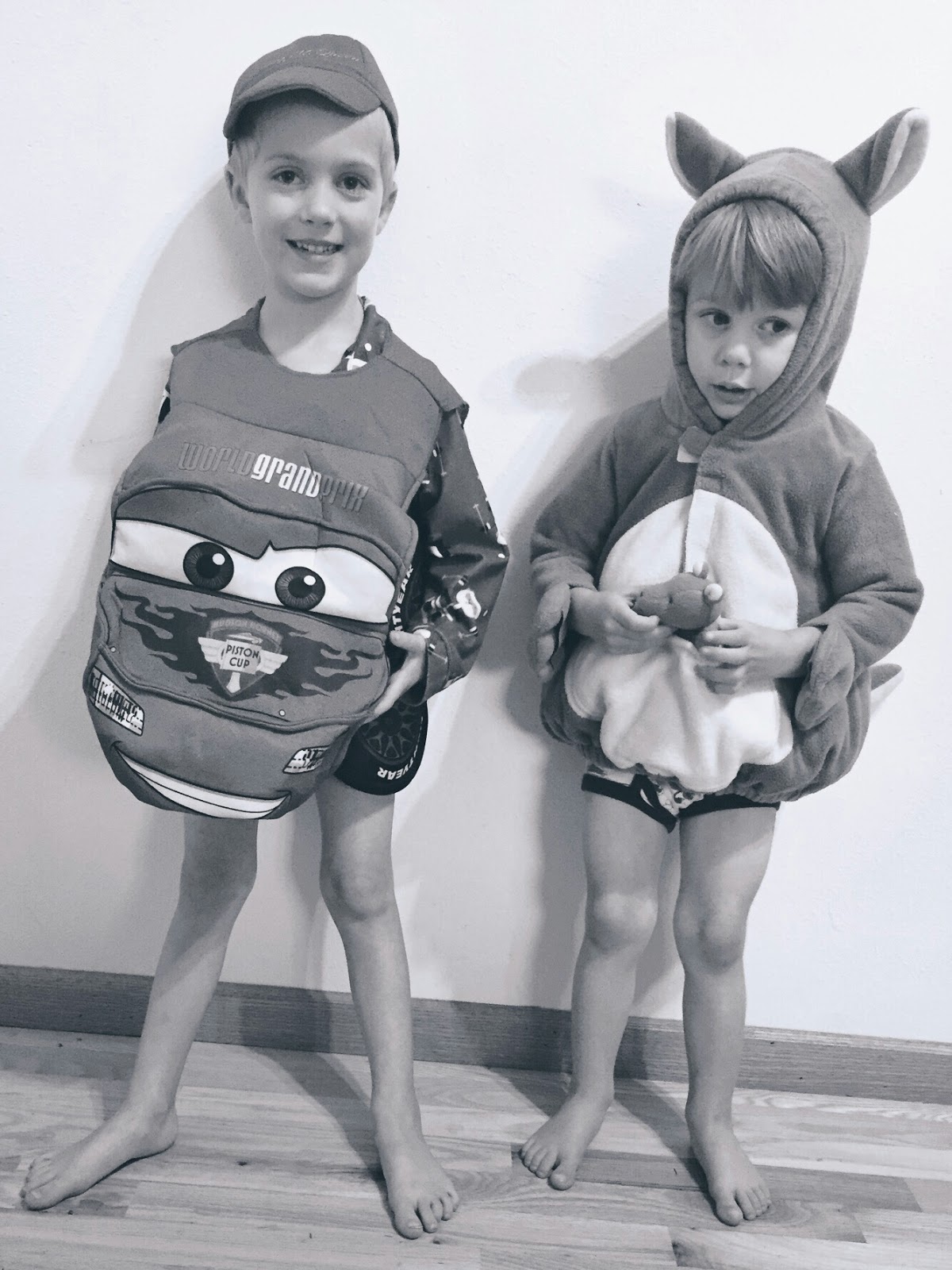 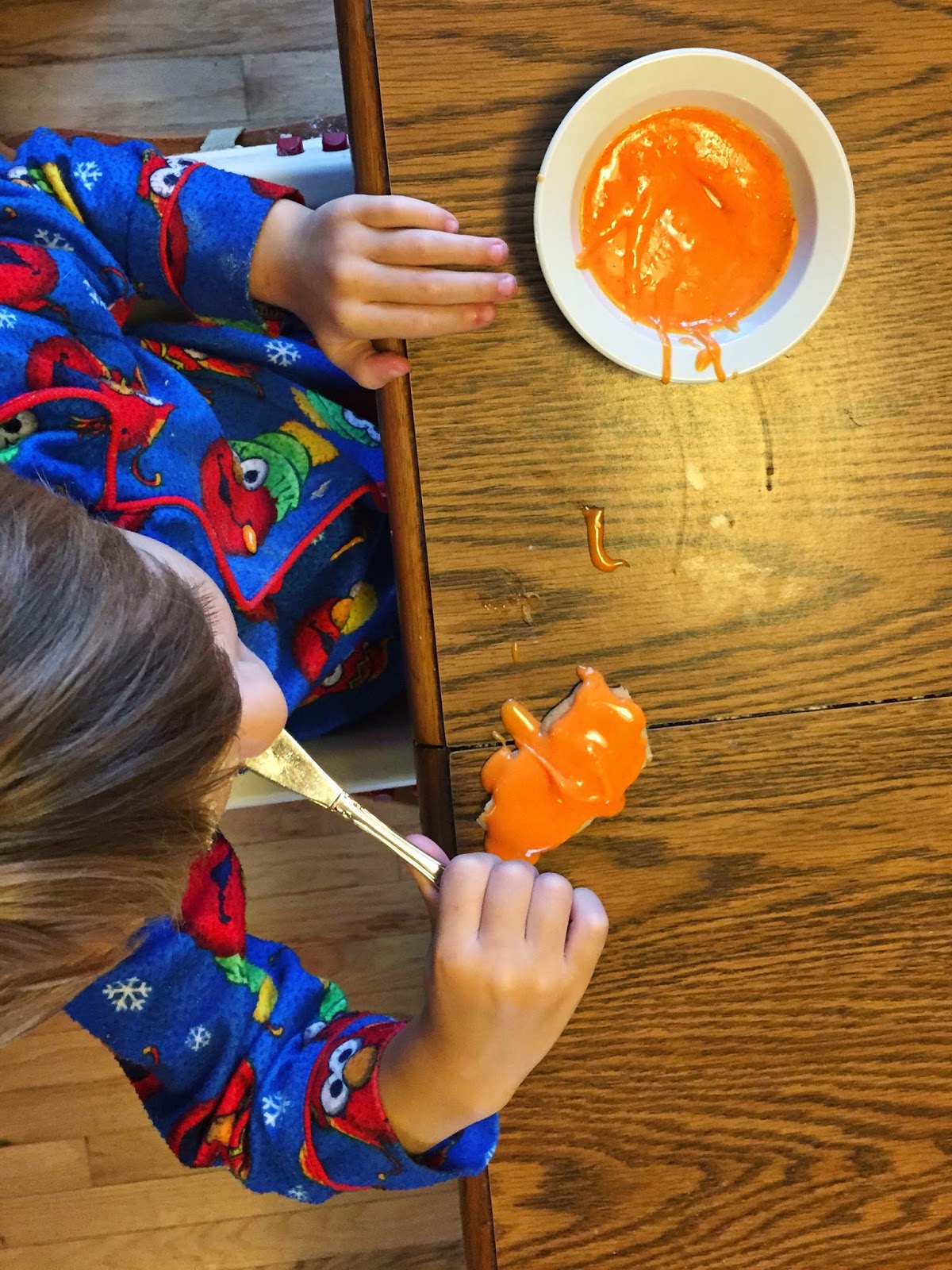 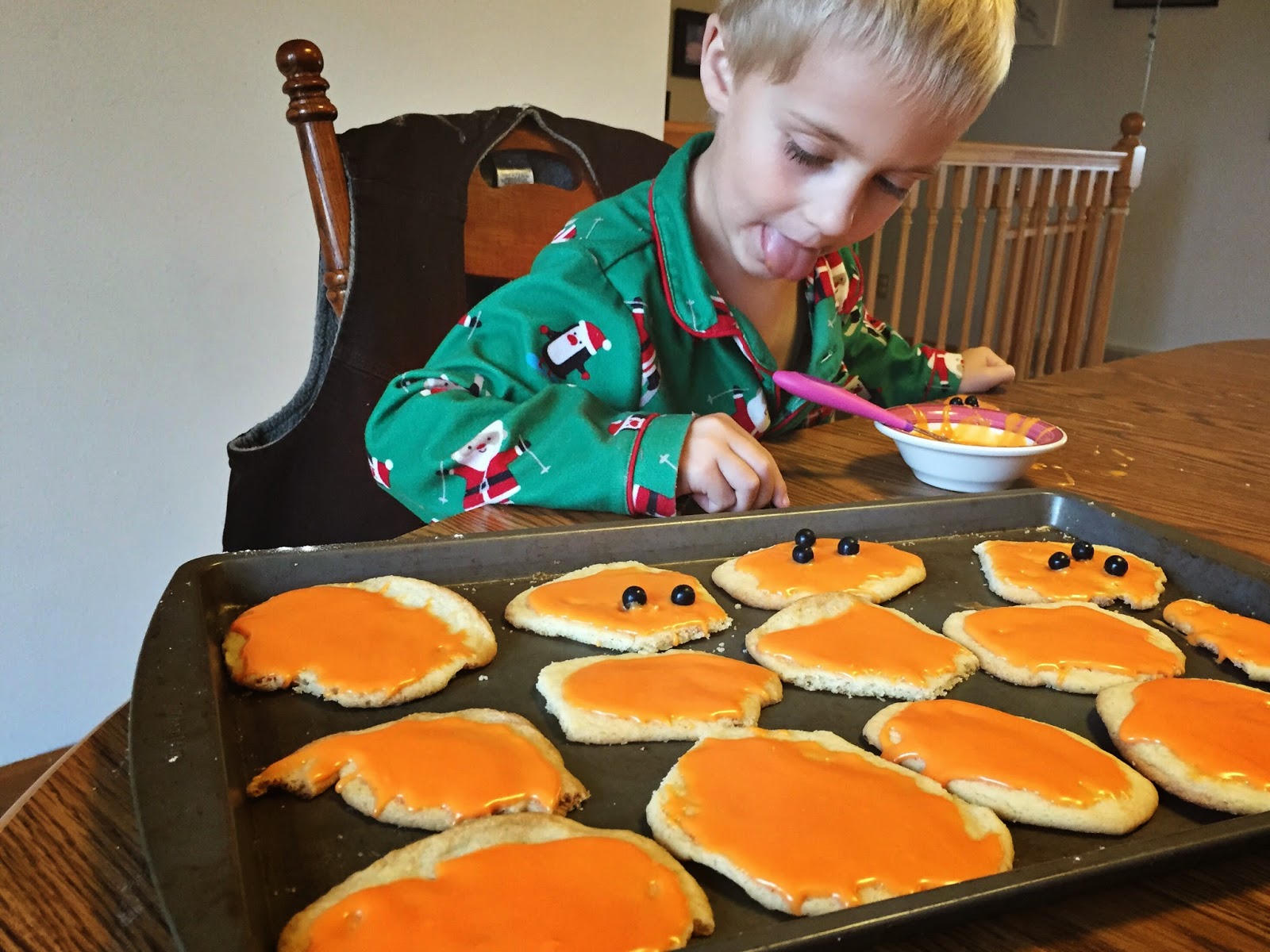 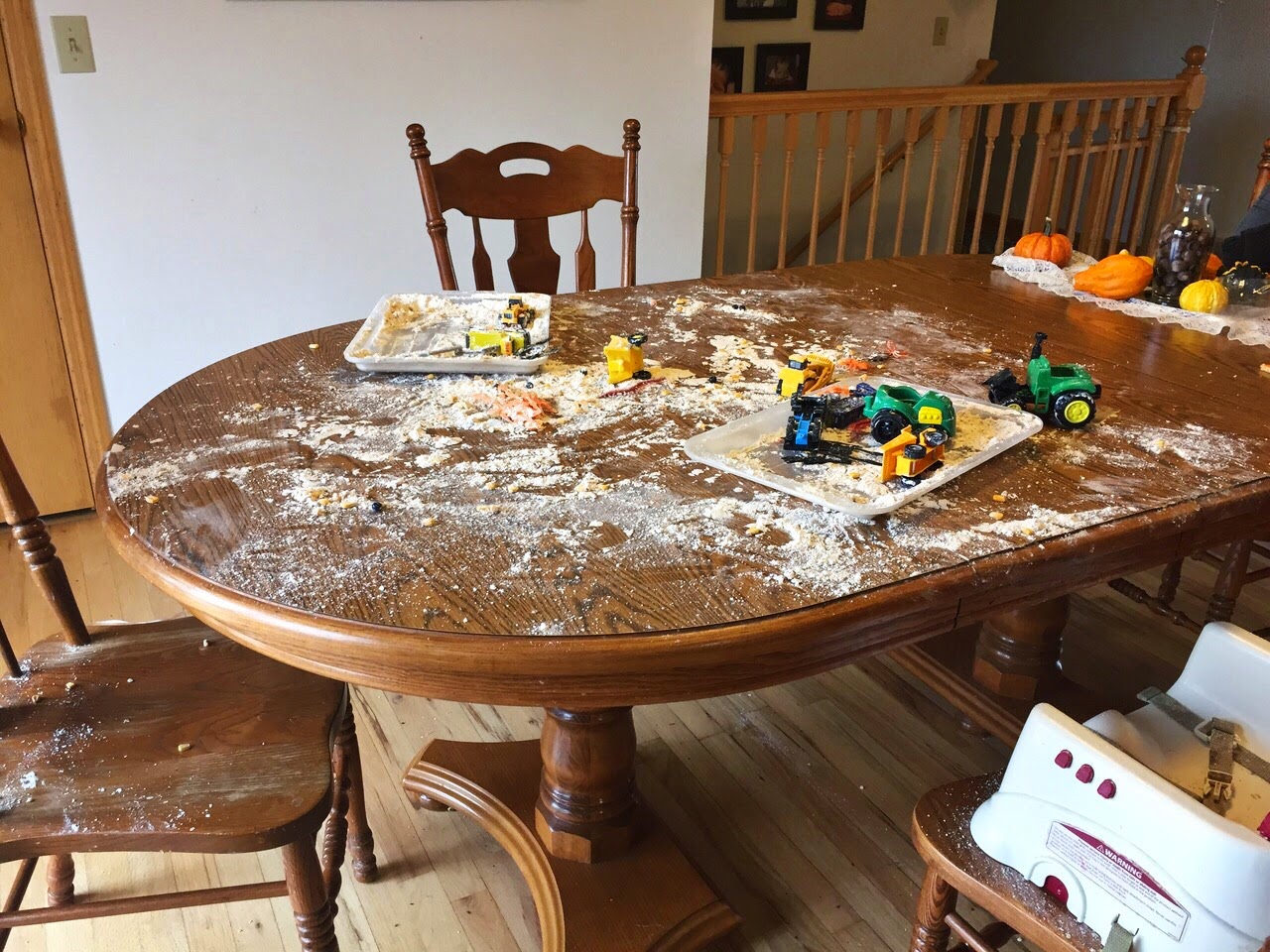 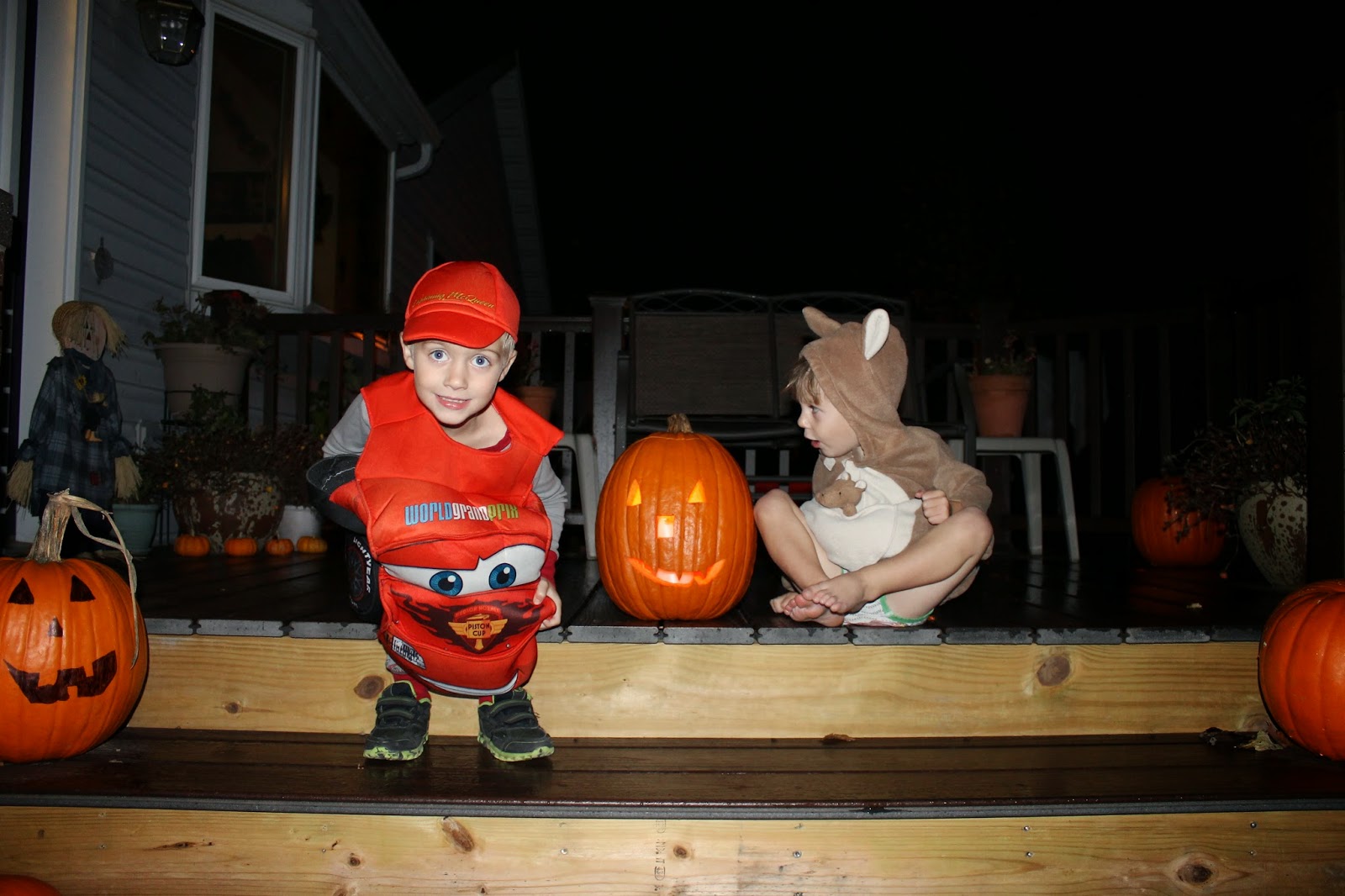 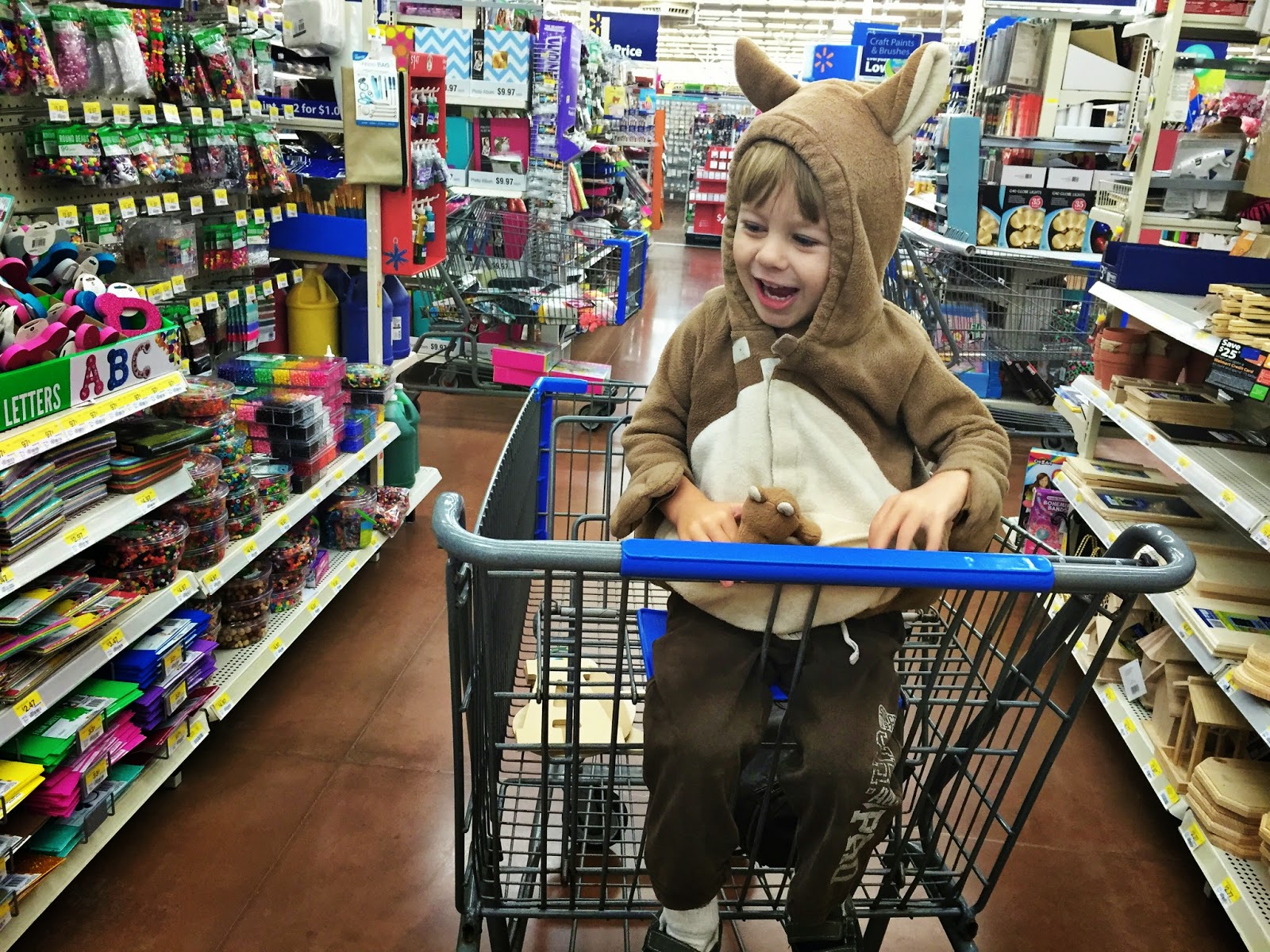 Besides the Trunk or Treating and school parties and community parties throughout the month of October, the highlight is always Trick or Treating on Halloween night. We ate supper and then waited. And waited. And waited. The time ticked so slowly, waiting for the sun to finally descend. We kept peeking out the window to spy the first of the costumes signaling the start of our fun. Finally--oh, finally--we stuffed layers under and over the costumes and headed out on that brisk 37 degree night. The boys ran from house to house on our cul-de-sac, fighting over whose turn it was to ring the bell. Instead of saying trick or treat, Ashton simply yelled CANDY!! the minute the door was opened, shoving his pumpkin bucket in their faces. Then they'd softly give their thanks and dash for the next door. By the time we rounded back to our house, our gloved fingers were cold, our noses dripping and our bodies shivering. We were done. The boys ate far too much candy--Spencer upstairs watching a Halloween Curious George movie and helping me hand out candy, and Ashton downstairs watching Frozen with Daddy--but it wouldn't be Halloween without eating yourself sick. 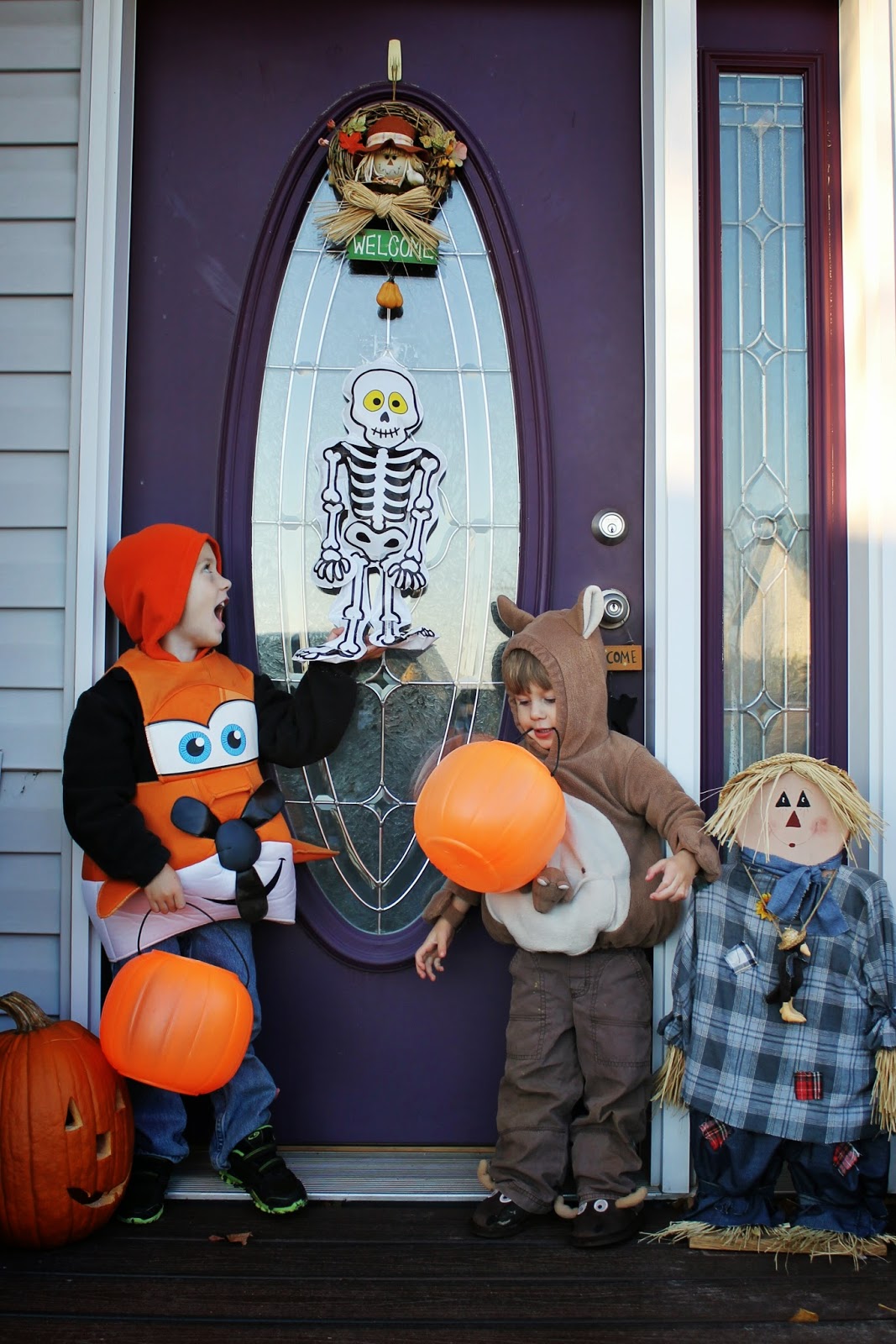 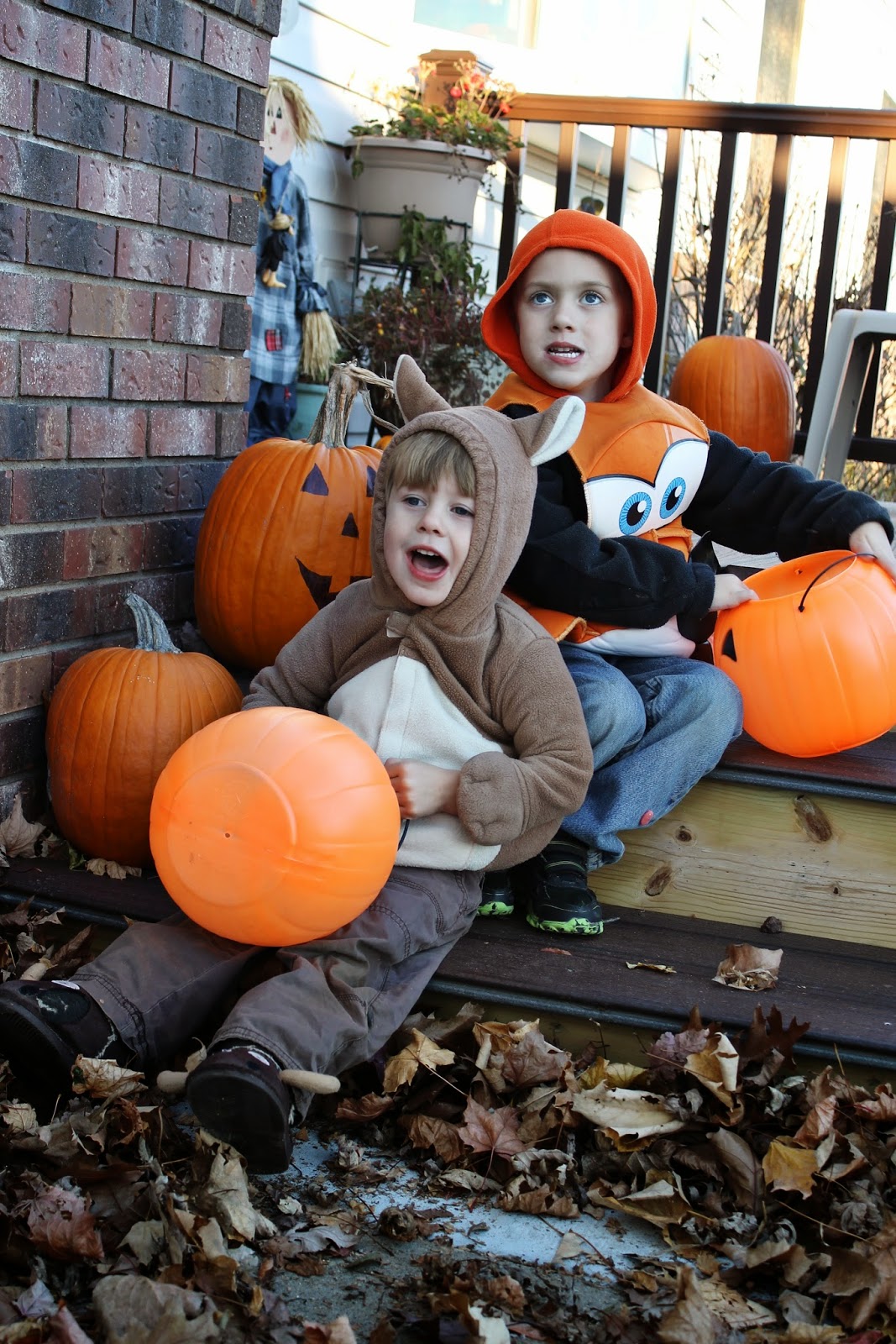 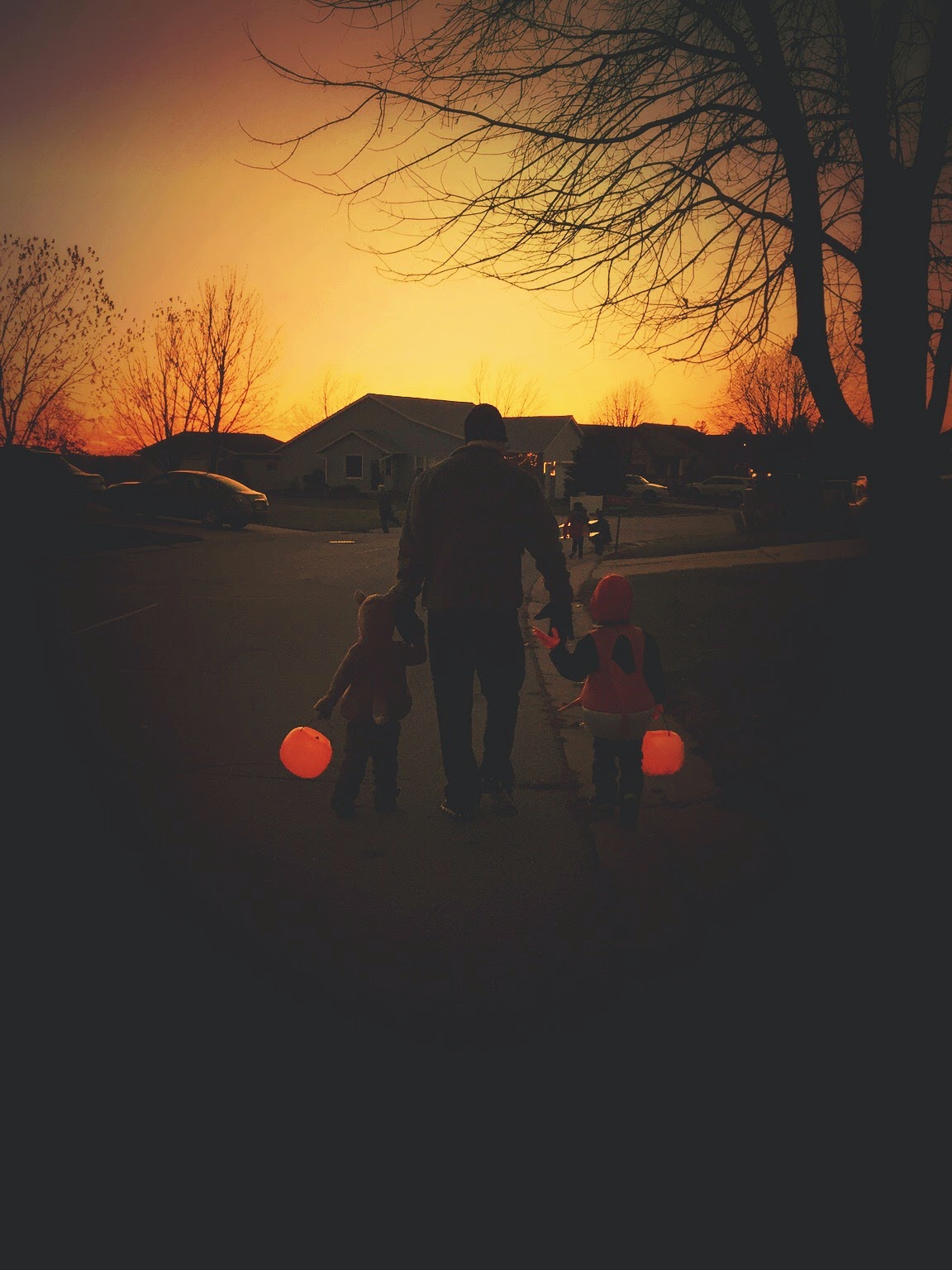 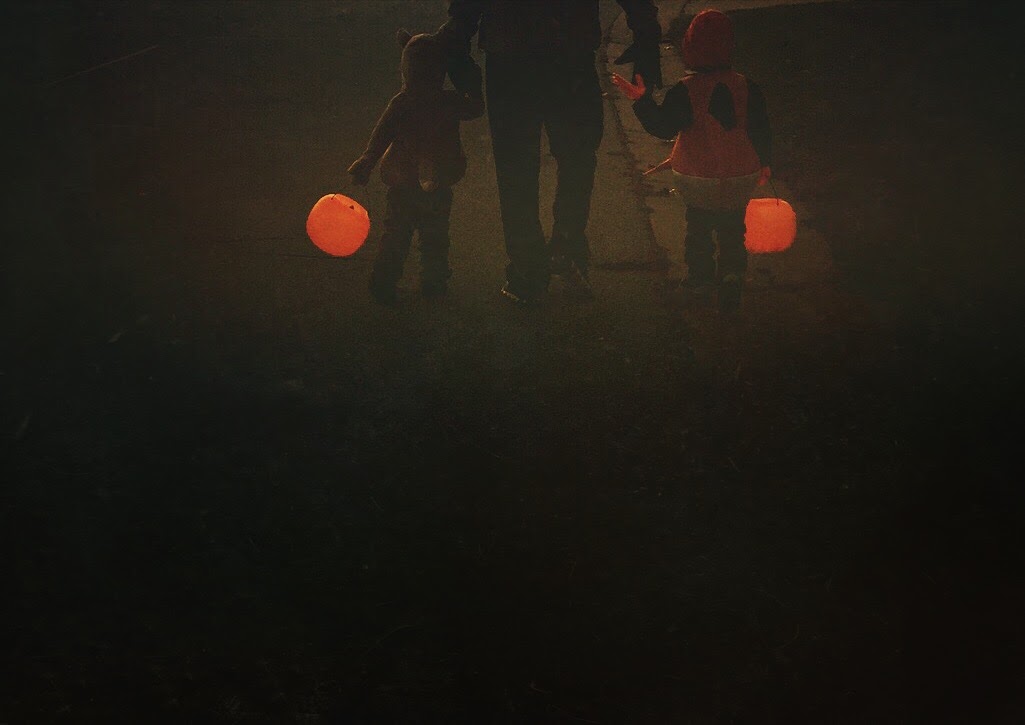 Although I've overdosed on Halloween, I'm now ready for the next holiday! 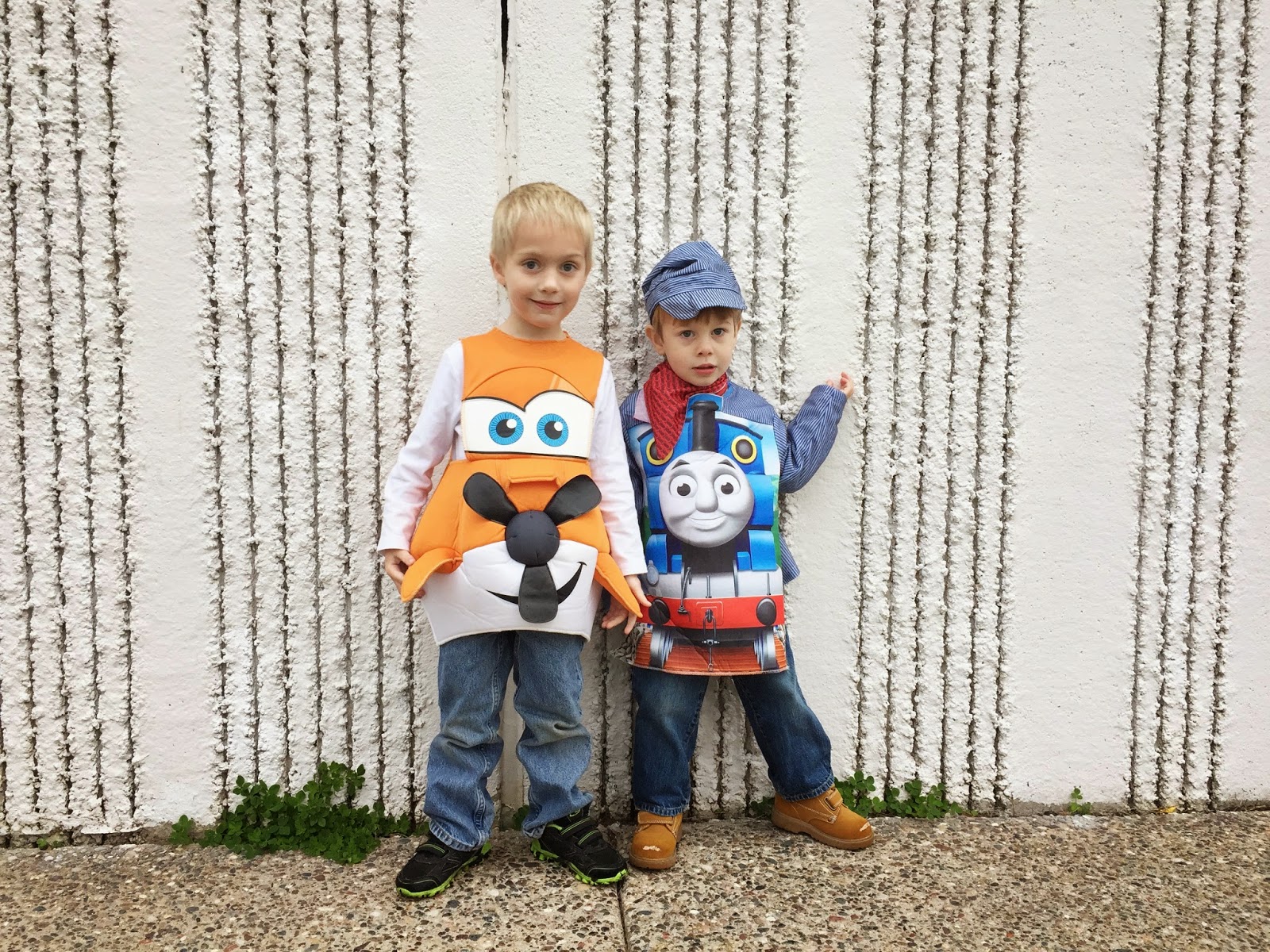 Posted by The Mahlke Chronicles at 2:24 PM