For unto you is born this day in the city of David a Savior, who is Christ the Lord.
-Luke 2:11

I had it all planned out. I scoured Pinterest. I sought help from a crafty mama friend. I printed. I drew. I cut. I glued. I organized a religious-themed, kid-friendly birthday party for Jesus. Then I got sick. I decided we'd soldier on anyway through the snot-dripping, head-pounding, throat-scratchy fog I was existing in. After all, I had it all planned out. We couldn't just abandon the plan! So we went from one activity to the next, my irritation and crabbiness increasing by the minute. They didn't sit still. They didn't shake the glitter right. They peeked through the blind fold. They messed up the tree-shaped pizza dough. They shoved too many pepperonis in their mouths. They were being kids and I was the Grinch who stole the fun out of the party.

During naps I regrouped. I declared the party a bust and decided we'd just cuddle and enjoy the day together instead of force something that wasn't happening organically. But then Daddy came home early, bearing drugs and Mimosas, and suddenly things seemed clearer (figuratively and literally); and so on with the festivities of Jesus' birth!

On our birthdays we have a tradition of sticking candles in our food for each meal and singing the birthday song. Jesus' birthday was no different. 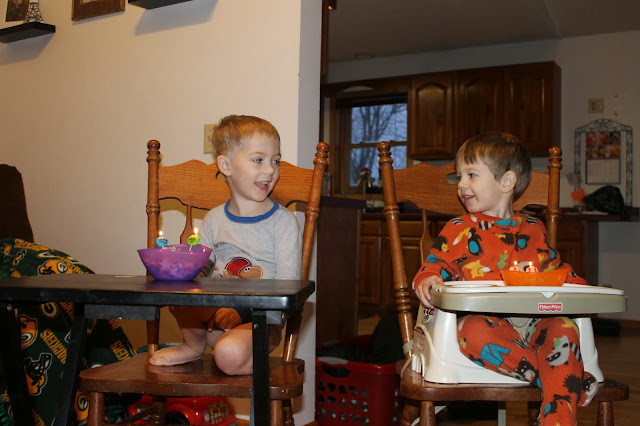 We started off our activities with Nativity puppets. I found a short and sweet story of Jesus' birth online and read that to the boys while lamely reenacting it with the popsicle puppets. Spencer sort of got into it, but Ashton was more interested in stealing the shepherds and baby Jesus. 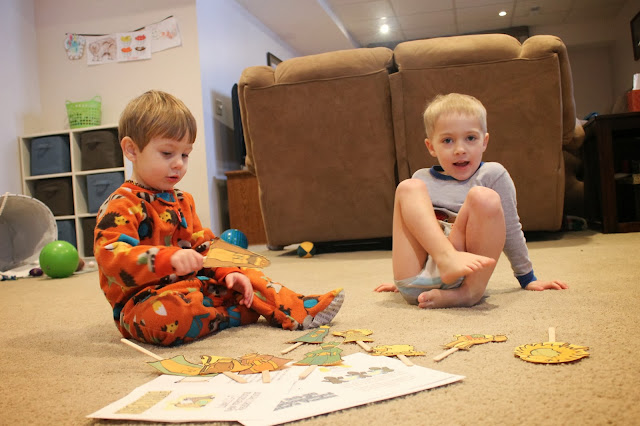 I drew a very lovely angel onto a piece of paper, printed off a halo clipart, blind folded the boys with one of my scarves, spun them around and told them to pin the halo on the angel. First, of course, I had to pose them in front of the angel picture as proof of their angel qualities--sometimes very lacking and hard to identify. Angels in disguise? Angels put on earth to test me? To love me unconditionally and lead me down the path of viewing the world with more positivity? All simultaneously, I do believe. 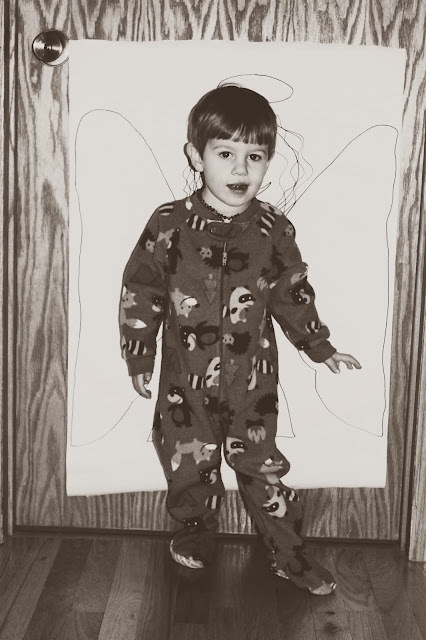 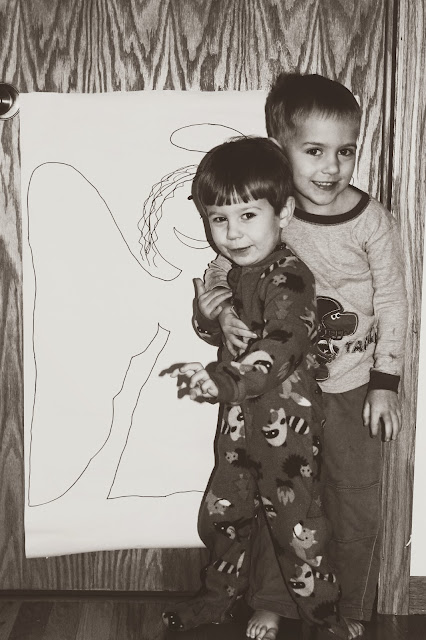 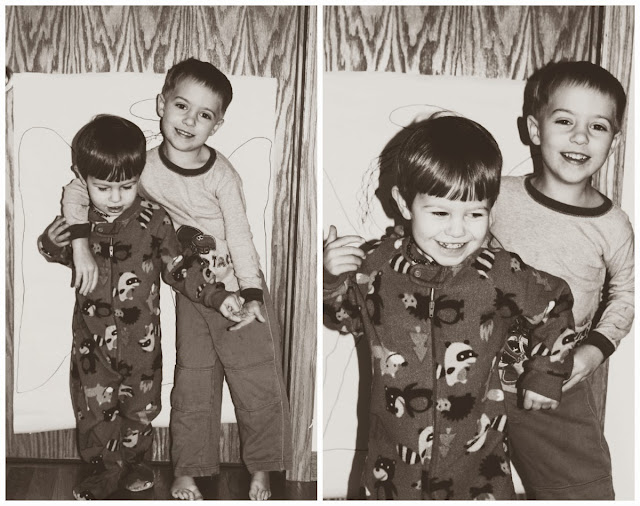 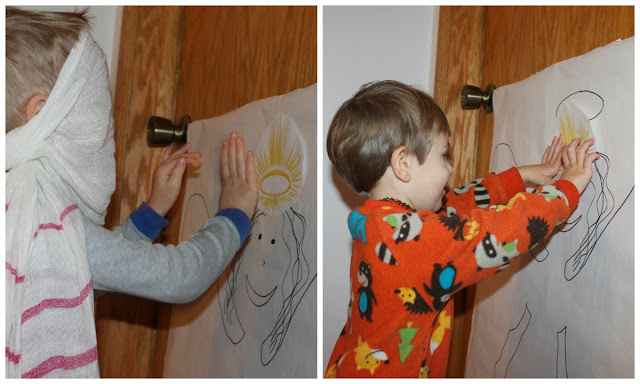 We made some ornaments out of Christmas Bible passages, and then hung them on the tree. The hanging part far overruled the gluing part in the fun factor for the boys. 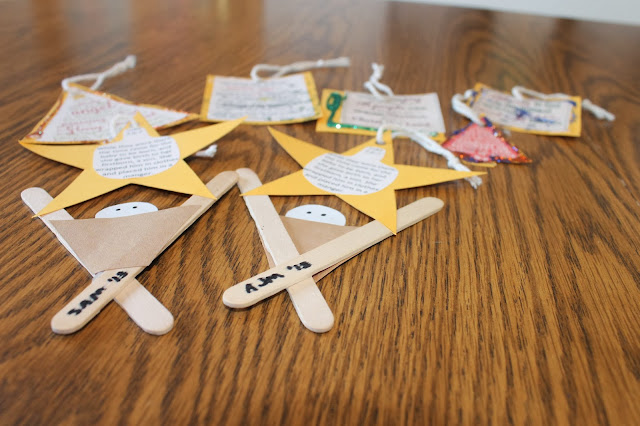 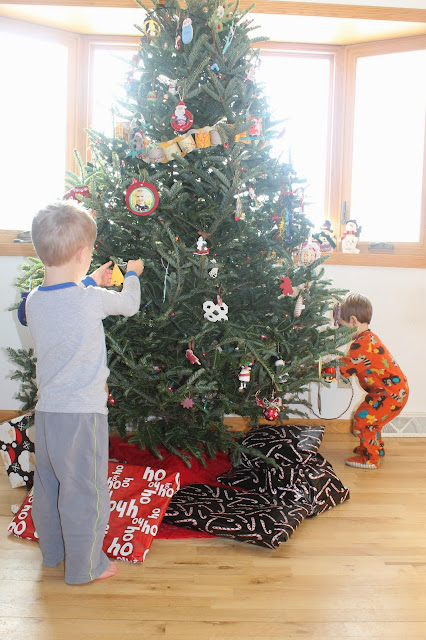 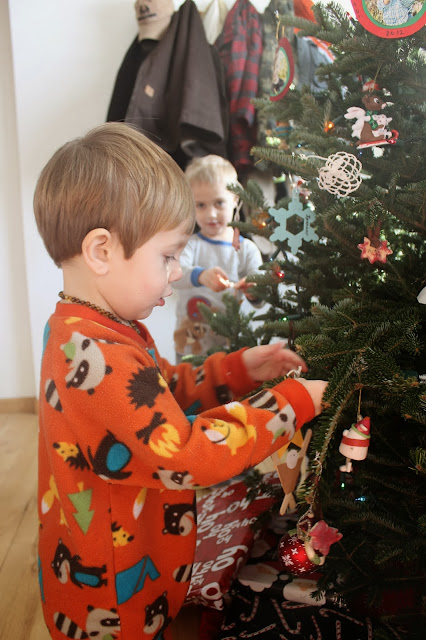 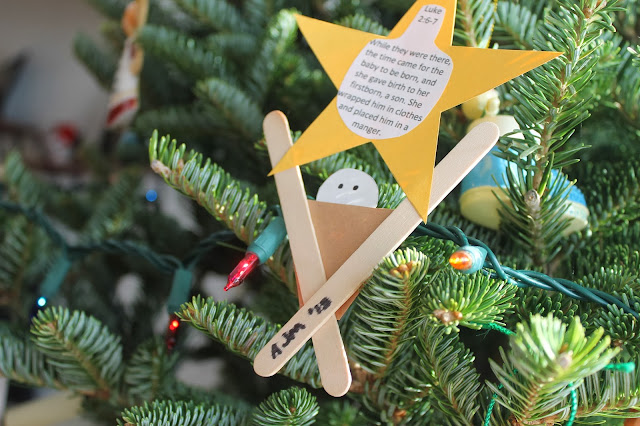 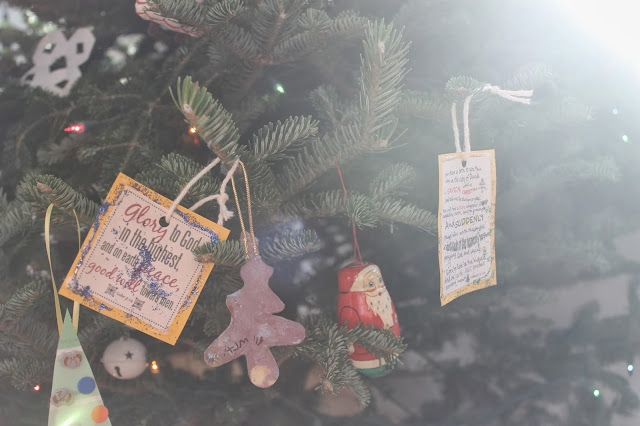 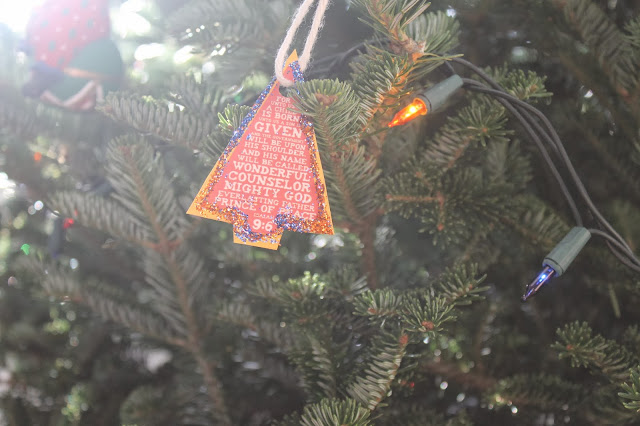 For lunch we made homemade pizza using tree and gingerbread man cookie cutters. The boys' ideas on how to make these did not jive up with the idea in my head, but they tasted pretty yummy anyway. 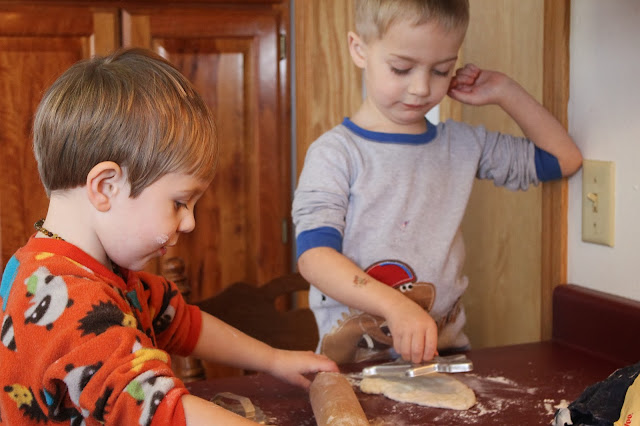 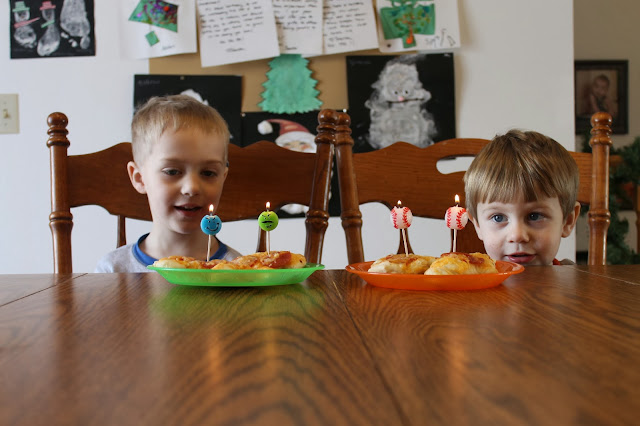 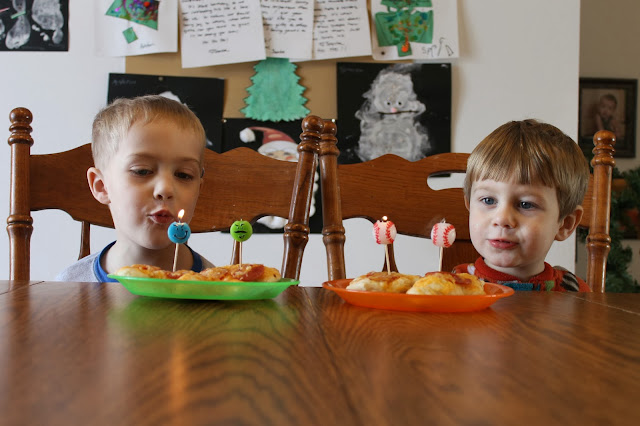 After naps we hung up our birthday festivities for some good ole fashioned cuddling. **Cue Daddy coming to the rescue with some meds right about now.** 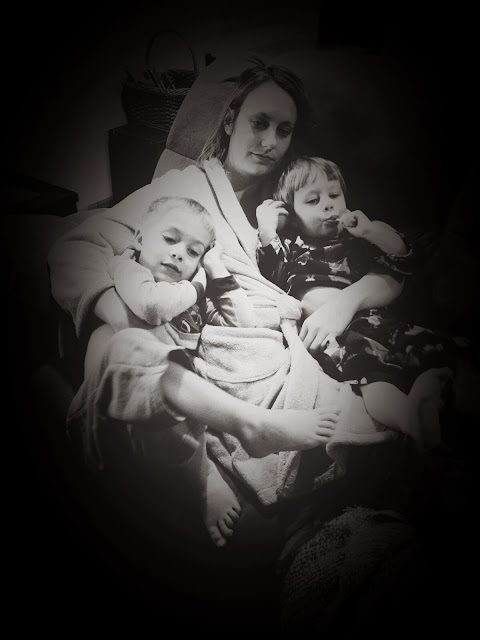 We played two rounds of BINGO, where Dave and Spencer reigned victorious the first round and I claimed the victory the next round. Ash...? Yeah, he just chewed on the dabbers and made a pretty red mess all over his face. 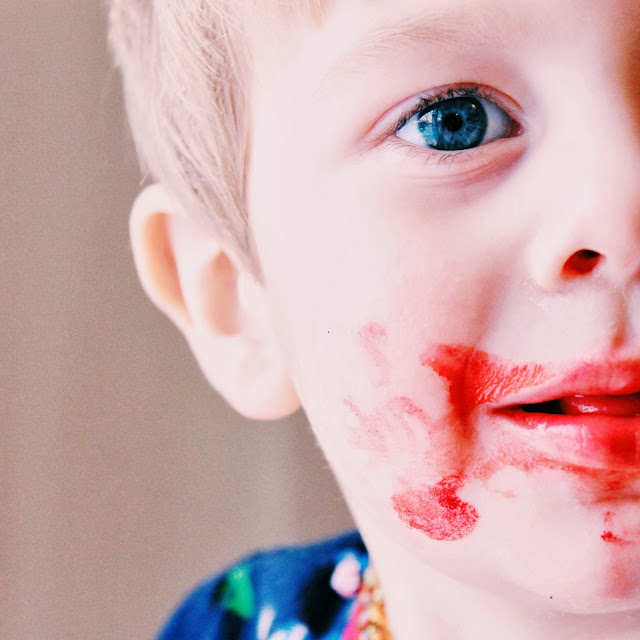 After supper we completed our party with another round of the birthday song and presents. The boys exchanged their gifts from each other. They both picked out a gift for their brother one shopping day. Dave took Spencer, who chose a helicopter for Ashton. I took Ashton, who chose an excavator for Spencer. 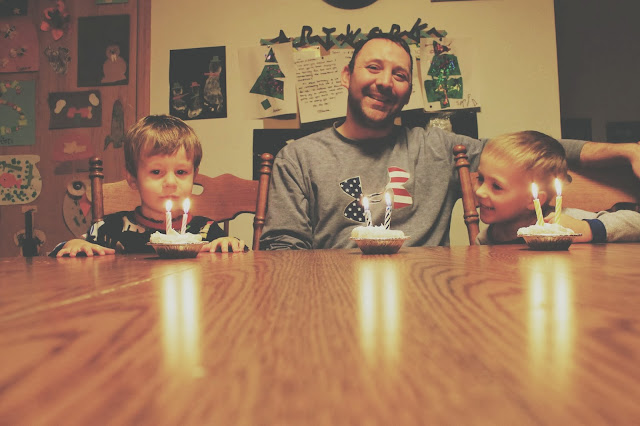 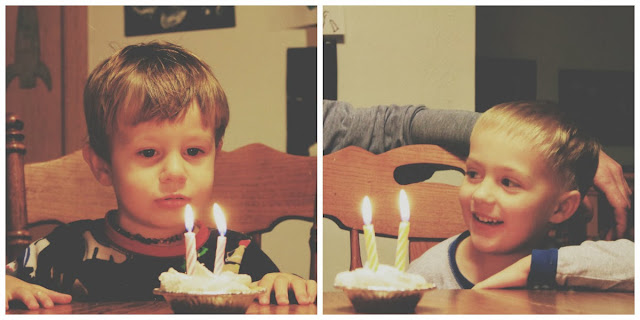 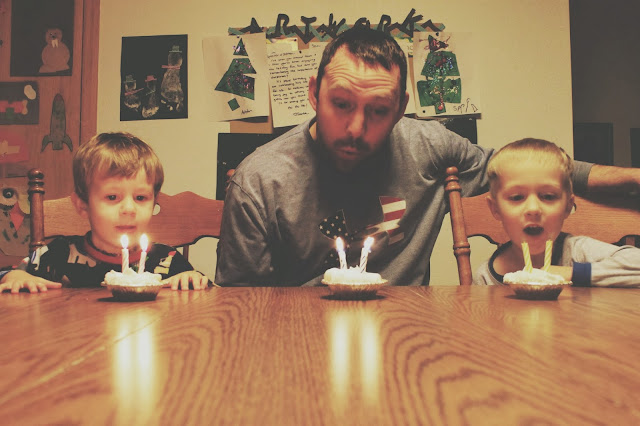 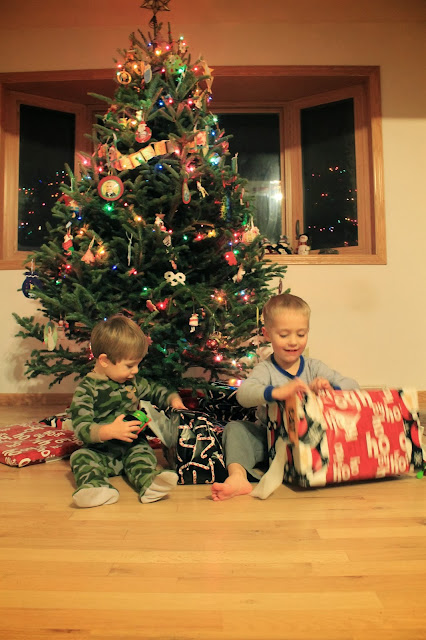 The day wasn't perfect by any means. I allowed my mood to get the best of me instead of rising above it. But as I look through these photos I am happy to see salvageable moments, ones where we all reveled in the celebration of Jesus' birth despite the negativity I was spewing. I apologized to my boys, and then we moved on and were able to party the way Jesus deserves. Happy Birthday, Jesus!
Posted by The Mahlke Chronicles at 2:40 PM