Last week we took the opportunity to review the current batch of letters we've learned. Each week we discuss the letter--how to write it, how it sounds, list words that start with the letter, etc--but then the following week we move onto a new letter and then a new one. It's always nice to take a break and revisit the ones we've already learned.

We started our review by making an alphabet collage poster. I sectioned off a big piece of paper with six squares. Each box was designated a letter. First we discussed each letter and I walked Spencer through writing them. F is one long line down, two small lines across. He writes his letters pretty well when he has a lot of guidance like this. If I ask him to trace one I've already written, he usually can do it. But he struggles to write them simply by looking at a letter and copying it. 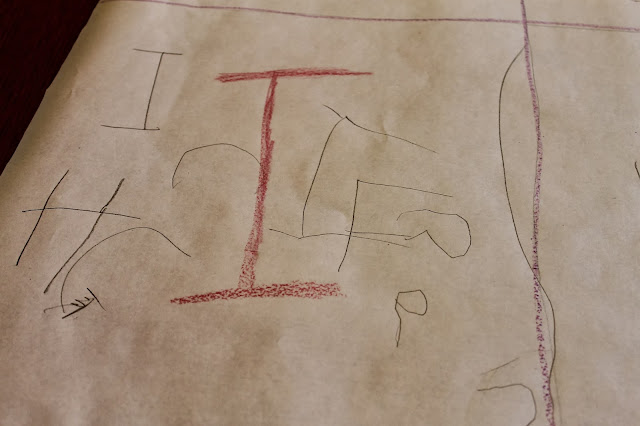 After we practiced writing the letters, then it came time to make our collage. I printed off pictures pertaining to our weekly lessons and then asked the boys what box the pictures belonged in. J is for Jaguar, K is for Kite.

Spencer and I played a game of Alphabet Memory, using letters A-K, S (for Spencer), and a few other letters he knows really well (O, X). Ashton started the game with us, but lasted all of 15 seconds before he scooted off my lap and busied himself with some toys. Spencer is really good at Memory. We've been playing a homemade game I made using family pictures years ago; and he has a few other games people have given him as gifts that we play, too. He usually beats me by a landslide since my memory isn't very sharp these days. But he struggles when we play Alphabet Memory. He can't seem to distinguish between the letters for some reason or another. And since I'm awful at Memory anyway, the game lasted an incredibly long time. I did end up winning eventually, but Spencer didn't want a rematch. I'm not sure what his struggle is with learning the alphabet, but we'll keep chugging along, trying to keep it fun until he finally retains the knowledge. 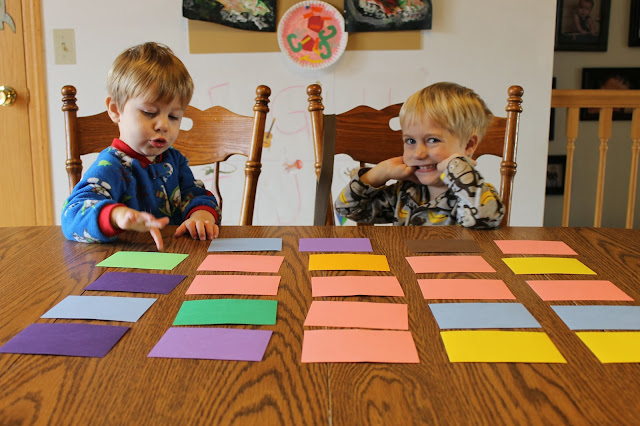 Our last activity was a game of Alphabet Bingo. I threw in some shapes and numbers to keep it interesting for Ashton, too. Well....attempt to keep it interesting, which was an unsuccessful ploy on my part. The paint dabbers proved to be too big a distraction. Even Spencer, who loved the Halloween BINGO, struggled to focus on the game. 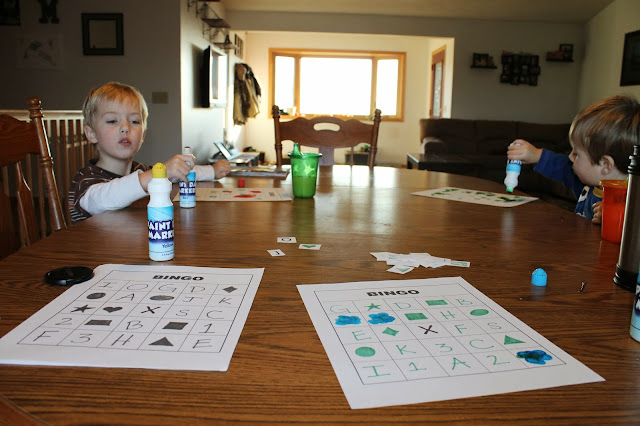