Summers provide us with a lot of flexibility in our schedule. We aren't tied down to weekly activities, shuffling here or there to various obligations. Because of this freedom, it is a lot easier to do projects and activities at home. So I decided to resurrect our old alphabet projects once again. This will be Spencer's third go-around with the letters, but Ashton is a virgin. It'll be a bit more challenging gearing the lessons toward two different aged kids, but we're more focused on having fun at this point than a rigorous academic approach. I'll leave that to the trained professionals.

I always try to incorporate learning through our everyday play and activities; and in doing so, I realized that Spencer really doesn't quite grasp what the alphabet is. Or numbers, for that matter. He knows the first letter in his name--or "his letter", as we refer to it--looks like a snake and Ashton's looks like a tent, because that's how I've described them. But if you ask him to tell you his letter, he'll either say snake or three, confusing his age with his first initial. Because of this, I thought it best to spend a week to introduce the alphabet rather than just jump right in with the first letter. This week we did a series of projects and activities surrounding the letters of the alphabet. And, yes, it was definitely more difficult trying to balance my time between the two kids and their different learning abilities. Hopefully I'll get better at this as the weeks go on.

We kickstarted the alphabet series with big posters displaying the letters A-Z. The boys could color, draw, stamp, dab to their hearts' content. I sat beside Spencer, filling in a letter at a time with a color pencil, describing the letter, the sound it makes, and listing objects that start with the letter. Both boys liked this until about letter D; then they just wanted to do their own thing. 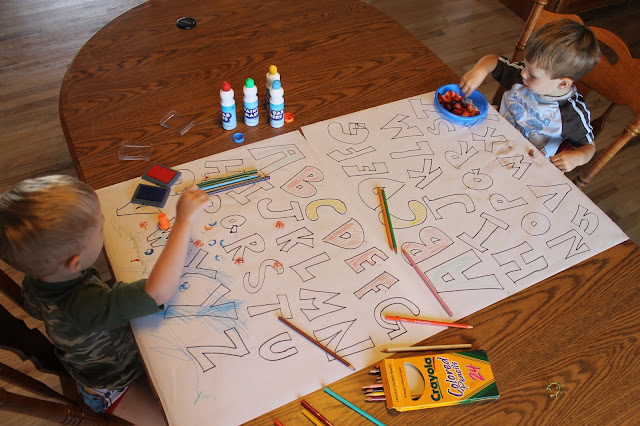 I'm a fan of wearable art. We've decorated a few shirts already, so when I saw this idea on Pinterest, I just had to incorporate it into our alphabet series. (For step by step instructions, click on the Pinterest link above.) I prepped the project beforehand (cut out the stencils onto freezer paper, ironed onto the shirts, etc) and after naps the boys colored away. Truthfully, they had more fun coloring the freezer paper and I had to keep urging them to color the shirt; I ended up filling in a lot of Ashton's initial since he was more focused on taking the caps off the fabric markers and then putting them back on, over and over again. The end result was pretty neat, I think. 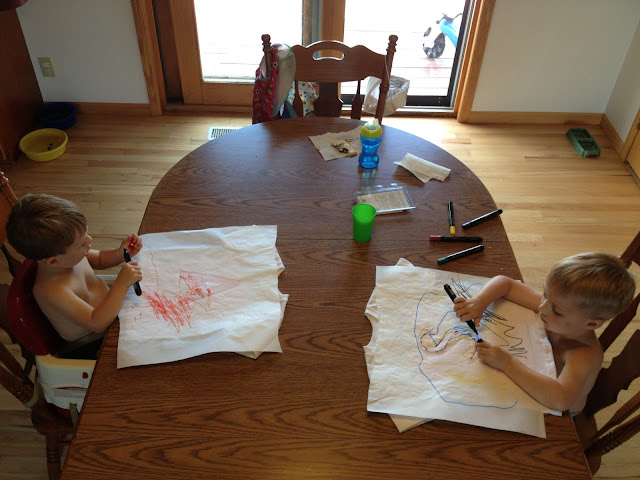 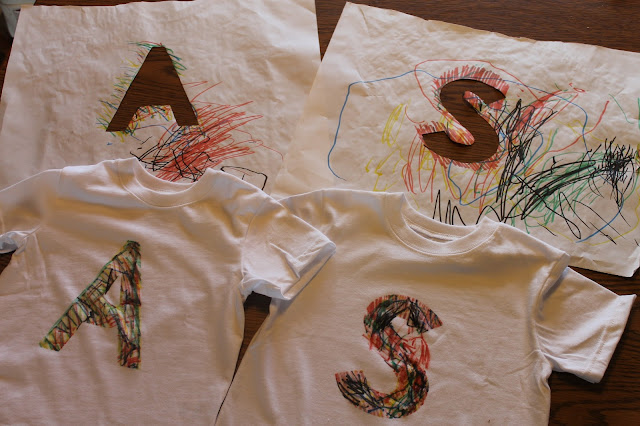 The favorite project of the week was the alphabet garage. I fused an idea I found on Pinterest and one from the Family Fun magazine to create it. I drew the roads, garages and letters onto an old piece of cardboard and then wrote letters on pieces of tape I put on little cars. (Don't worry, Uncle Brian, no Matchbox cars were harmed in this activity.) Spencer had to drive the car into the garage with the matching letter. Truth be told, this one was like pulling teeth, getting Spencer to participate. All he really wanted to do was VROOM around the race track, and crash cars with Ashton. He unwillingly cooperated with a handful of letters before I gave in and let him play however he liked. We played with this race track throughout the week, even using it as a snack garage once.

One afternoon Spencer and I played a quick game of Alphabet Memory from a homemade deck of letters I crafted. I modified the game to only include a handful of letters because I knew my three-year-old's attention span wouldn't hold up for all 26 letters. Since he loves games and is especially good at Memory, this one was a hit. 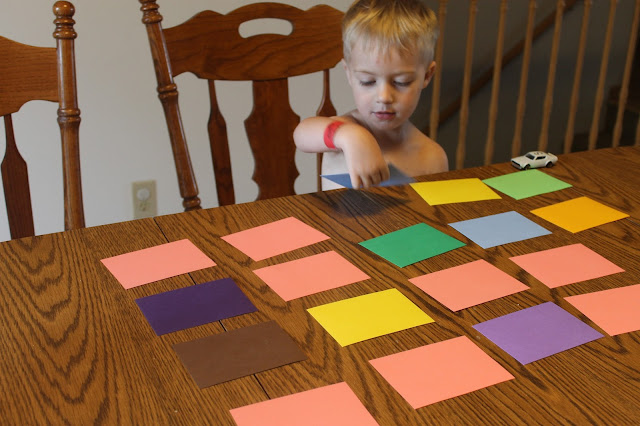 Our last activity was fishing for letters. We used the fishing poles I made last year out of sticks, yarn and paper clips and fished magnetic letters out of the water table. (Please note: some of the letters are too heavy for the wimpy paper clip, so I found it's better to double up on the paper clip hooks.)

I've been working on adding labels to all my past posts, so eventually you can locate our old alphabet projects on the right hand column of the blog. Now on to letter A.....

Alphabet A--->
Posted by The Mahlke Chronicles at 9:44 AM