This past week was Screen Free Week, where, ideally, you go without any type of screens (i.e. TV, computer, phone, iPad, etc). Instead of giving up all screens, Ashton's Early Childhood Family Education Class asked the parents to give up some type of media for the week. Most moms gave up something for their kids, like no TV while cooking supper. Some moms sacrificed some of their own screen time, like committing to only checking Facebook once a day instead of several times throughout the day. My kids don't get a lot of screen time anyway, so I knew the one who would benefit the most from this experiment would be me. I was trying to figure out what I could give up that would be the least painful. Blogging. Facebook. TV. Any of these things would have been slightly difficult but I would have survived. That's not the point, though. That felt like cheating. So I went for it. I gave up the one thing that I knew would be the hardest, most gruesomely painful screen time for me--Instagram. For the love of all screens, I'm obsessively addicted to Instagram! Posting pictures. Browsing through my feed to see other people's pictures. Commenting with witty hash tags (#). Double clicking the picture to "like" it. It's an obsession. OK, all right, I just said it. I have an Instagram obsession.

Hi, my name is Angie, and I'm addicted to Instagram.

On the day all the moms proclaimed what we were willing to give up for the week, I was hesitant, wondering if I should just give up Facebook or blogging instead. Even though I was shaking, already anticipating the withdrawal from my beloved "IG", I went for it. I committed myself for a week-long IG fast.

Sunday began my journey, and it was hard. So hard. I kept thinking of the pictures I wanted to post, kept wondering about what others were posting, what I was missing. I stared at the little icon on my phone, longing to click on it, to instantly be connected with my Instagram community. But I was strong. I prevailed. I survived a week without Instagram. Go me!

OK, so confession: I'm being slightly melodramatic; it wasn't really as hard as I'm letting on. It was easier than I thought. But come the end of my fast, I hopped right back on Instagram and caught myself up. Oh, it's so good to be back! Yeah, yeah, I learned a valuable lesson, too. Maybe, perhaps, possibly I overdosed on the awesomeness that is Instagram, and I probably should spend a little less time on it. I will, I promise; this Screen Free experiment wasn't a total waste. I'll post more #latergrams and less "insta" ones to ensure that I'm actually getting the most out of my present moment--be that whatever I may be doing, whether it's playing with my kids or hanging with my husband--so I don't lose myself in the silliness of it all and actually "exist in the now."

But....I have a week's worth of photos that never made their way into Instagram land, so here goes:

Would've Been Post #1 -
This week I started working out. I'm "shredding" with Jillian Michaels. I set my alarm to wake up before the kids and I spend 20 sweaty minutes resisting the urge to throw my measly three pound weights at Jillian. It's amazing how productive you can be if you actually wake up before your kids, not to mention how energized you feel when you get your heart rate up. I'm also doing a 30 Day Squat Challenge with my friend Ann. We're currently on Day 5. My thighs hate me, in case you were wondering. (Oh, and I really enjoyed Day 4.)

Would've Been Post #2 -
The weather at the beginning of the week was lovely. It felt like spring. Monday night we ate outside at a drive-in restaurant. Tuesday Ash and I picked up Spencer from preschool with the clunky, cumbersome double stroller and walked to a nearby park for a picnic lunch. Apparently the theme this spring is to not feel secure in the fact that spring just might stick around this time. 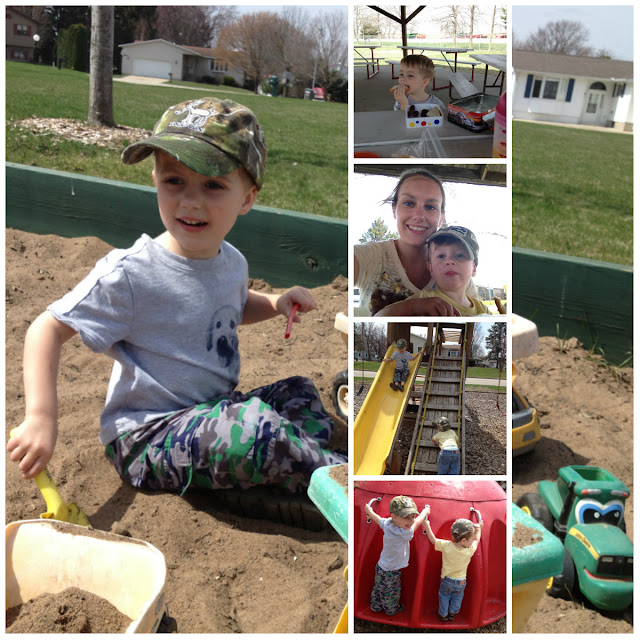 Would've Been Post #3 -
This is what happens when you become too excited about spring. You get dumped on. Again. To stave off a mental breakdown, we decided to yet again embrace the snow. We revisited an earlier winter project and painted snow again. 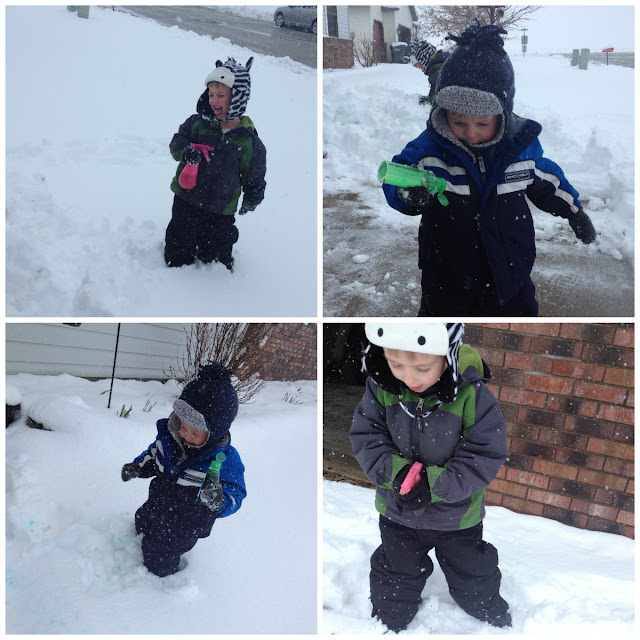 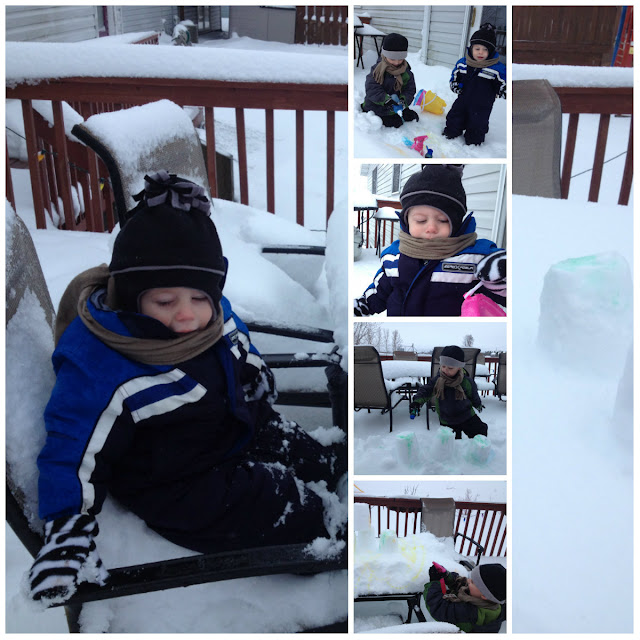 Would've Been Post #4 -
This week Spencer provided the inspiration for our project, and the idea came one night at bedtime while we were reading a book about animals. When he asked me what walruses eat, I was stumped. I should know these things, I'm sure, but I just told him we would have to find out. That's when he suggested we turn it into a project. So that's what we did.

After I did a little Google research, I came up with the idea of the boys actually feeding a walrus. What better way to learn what an animal eats than to feed it to them? They loved that. (By the way, in case your kid ever asks: Walruses eat clams, snails, worms, crabs, etc. I'd hate for you to find yourself in my predicament one day. So there you go.)

Since we were learning about Walruses anyway, why not do another walrus picture while we were at it? I cut out all the pieces and Spencer glued on all of his. Ash just ate the glue stick, so I assembled his walrus.

Would've Been Post #5 -
I found the idea off Pinterest to paint with spaghetti. I thought the boys would love it. But Ashton cried the minute the paint dirtied his pretty little hands. Then when I gave him a fork to handle the noodles with, he fed himself some colorful pasta, then proceeded to cry about that. Apparently painted noodles is not equal to marinara-covered spaghetti. Who knew? Spencer loved it until I made the observation that once all the paint colors were mixed together to form a grayish-brown the noodles looked like worms. That was it for him. Noodles + paint = fun. Noodles + paint + the mention of worms = not fun. You live, you learn. Don't ever compare anything to worms. Your kid might not enjoy that comparison.

Would've Been Post #6 -
Also this week we celebrated Spencer's friend Austin's 4th birthday at Chuck E Cheese. Since we went on a Wednesday morning, we pretty much had the place to ourselves. I totally recommend that! Then our celebration commenced at a drive-in restaurant for lunch and cupcakes. 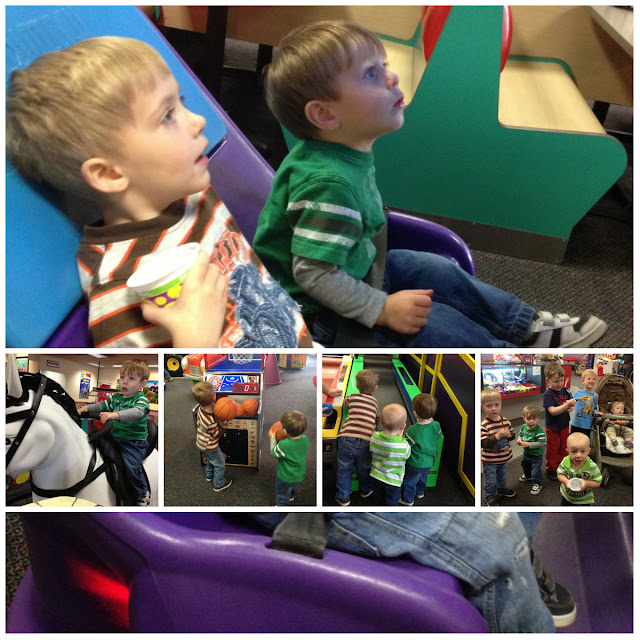 Would've Been Post #7 -
My husband had a big day this week. He waved good-bye to his youth and said hello to the beginning of the end. He joined us in the Old Geezer Club after hitting the big 3-0 birthday. We had our little family celebration on Saturday. The boys and I made Dave a card and a cake and gave him a small gift. (As it turns out, Ashton is definitely not ready to be trusted around a cake to help decorate. Apparently he has no self-control and will grab fistfuls of cake and frosting. Then he will become upset when you take him off cake-decorating duty and give the sole responsibility to Big Brother, who has learned the necessary self-control not to shove his fists into the cake.) 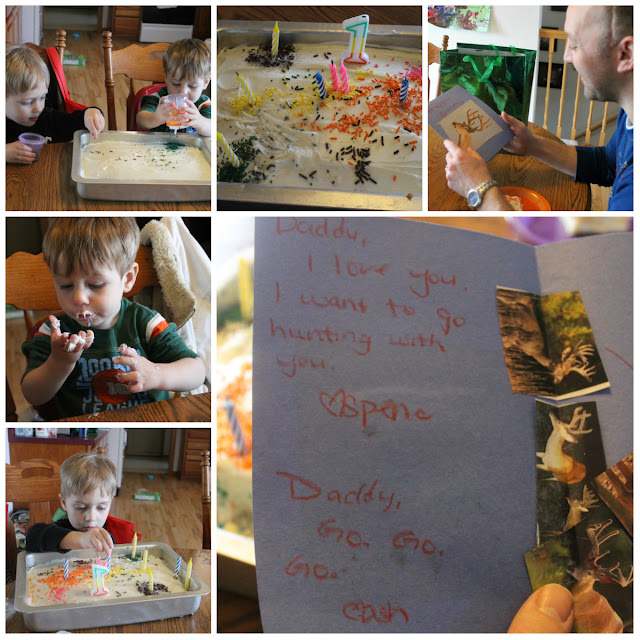 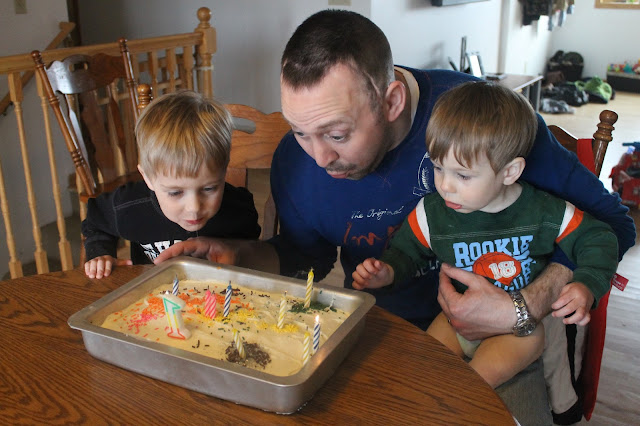 On his actual birthday--Cindo de Mayo--Dave and I went out to dinner at a fancy smancy restaurant with the in-laws. 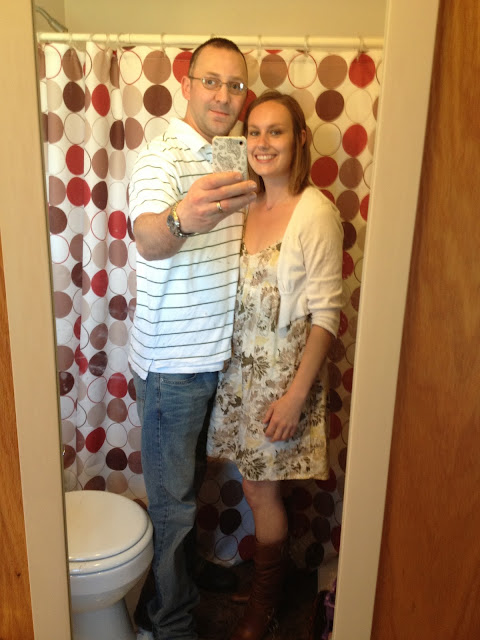 Here are more random Would've Been Instagram Posts from the week:


Posted by The Mahlke Chronicles at 8:38 PM