Nearly nine months ago--the same amount of time it takes to grow a baby inside of you--my oldest son began a journey. A journey that continues from toddlerdom to young adulthood. Each year he will begin this same journey anew, with a different set of people, with different scenery, but with the same expectation that he will be learning the tools to some day leave the nest. Go in as a baby; come out as a man. Nine months ago I was fanning my face with registration papers at my son's preschool open house, trying to dry up the tears threatening to spill out of my eyes, tears of trepidation over the beginning of my son's journey out into the big scary world, his journey away from me. This week he ended phase one of this journey, and he is now one year closer to completing it. One year closer to going out into the world. One year closer to standing on his own two feet. One year closer to not needing me. 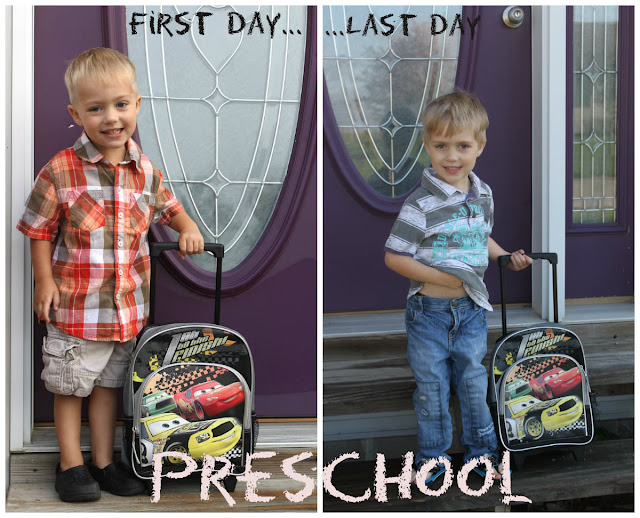 As I dropped him off at his last day of preschool this week, I choked back the tears that again threatened to spill out of my eyes. The moment--somewhat anticlimactic--meant more in all my sentimentalism and tendency to become overemotional than was really warranted. After all, it was like any other day in all those nine months I dropped my son off at preschool. Just another day on the job. Yet, it was laced with the notion that this particular day was the very last time Spencer would be this exact age in this exact setting with these same teachers and friends. It was a big moment, probably bigger to me than to my three year old son, who just wanted to hurry and say good-bye so he could help his teacher fill up the water table.


Spencer is not the only one inching his way to the arbitrary finish line, his little brother is right on his heels. Ashton hit the 19 month mark this week. With it comes a whole sleuth of new things, both good and not so good. He's taken to numbly asking why at every possible scenario, which seems so unfair at this young age, when his big brother is still pestering us with that same never-ending loop of questioning. He's grown very accustomed to things going his way; and we've gotten into the habit of fostering that notion. Now we are working double time to correct the viscous cycle. We're having fun battling hitting, biting, squawking, crying and jealous moments of sharing Mommy. It seems Ashton is less and less of a baby these days and more and more of a toddler, in both appearance and behavior. This paired with Spencer's seemingly unidentifiable ailment this week has left me reaching for my reserves and finding it empty. 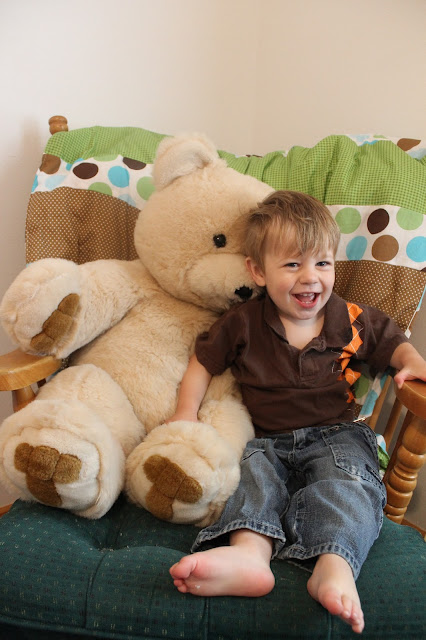 Parenting is a hard gig, riddled with ups and downs, highs and lows, good times and bad times. No matter what stage of parenting we find ourselves in, we must jump in with both feet and ride the waves. Happy parenting; enjoy the journey.

Out of the mouth of Spencer, Edition 1.

5.14.13
The set-up: On the way to preschool we're discussing man versus woman.

Spencer thinks about this for a while. Then he says: What eats men?

Spencer:  Where are you going, Daddy?

Spencer looks at me puzzled and asks: Makeup? Why is Daddy going to your room to put makeup on?

5.15.13
The set-up: We're playing on the deck. Ashton is obsessed with his penis. He loves playing the game where you point to an object and give it ownership. Ashton's chair, Mommy's chair, etc. On this given day, the object of this game is penises. He points to his penis and we oblige and call it Ashton's penis. Then he points to me and attempts to pull up my long shirt to reveal my crotch, expecting me to play along and call it Mommy's penis. I try explaining girls don't have penises.

Spencer, watching this whole exchange, says: What do girls have?

Since we have had this discussion several times, I ask him what he thinks.

Me: I don't remember.

Me: Because I'm old.

Spencer: No, you're not old. You're new.
Posted by The Mahlke Chronicles at 1:59 PM

Email ThisBlogThis!Share to TwitterShare to FacebookShare to Pinterest
Labels: growth, out of the mouth of spencer, parenting, preschool, teacher gifts