One of those weeks

We had one of those weeks where I just could not wait until all things were done and it was finally the weekend. And not just because I love weekends (because who doesn't?), but because of all the things crammed into one week was daunting, to say the least. Since I am a champion procrastinator, I had a lot of last minute things I was scrambling to get done (special present for my mom, party arrangements for my husband, clean house for a guest, etc) and such little time to do it since our schedule was so full (preschool party, hospital visits, ECFE, etc). But I survived it and now the weekend is winding down.

Here are some glimpses into our week, excluding the specifics on the hospital visits and my husband's party. Those will come in later posts.

In the coming weeks I want to focus on number recognition and counting with Spencer, so we started with a simple color sorting/counting activity with a number worksheet. I colored some water bottles to match the colored pom poms. The number on the bottle determined how many pom poms of that specific color went in the bottle. Spencer also had to locate the matching number from the bottle onto the worksheet and circle it. Then he had to trace the number to practice writing it. He has very little interest in identifying numbers and letters, so I am trying to find interesting ways to engage him instead of drilling the information into his head. Mostly he just wanted to play with the little pom poms like his brother got to, but he did cooperate and do the numbers lesson with me first.

Ashton really enjoyed this activity as well. I turned it into a fine motor skills one for him and he had fun sorting the pom poms and dropping them into the bottles and assortment of containers I gave him.

We also did another Easter project. I'm trying to incorporate the Biblical meaning of the holiday, and not only focus on the silly side of it, but I'm struggling trying to explain the significance of it without delving into the heavy subject of death and Heaven. How do you explain to little ones the story of Jesus' death and resurrection without having to also divulge the gloomy truth about death? I explained it the best I could while making our collage cross "sandwiches" as Spencer described them. 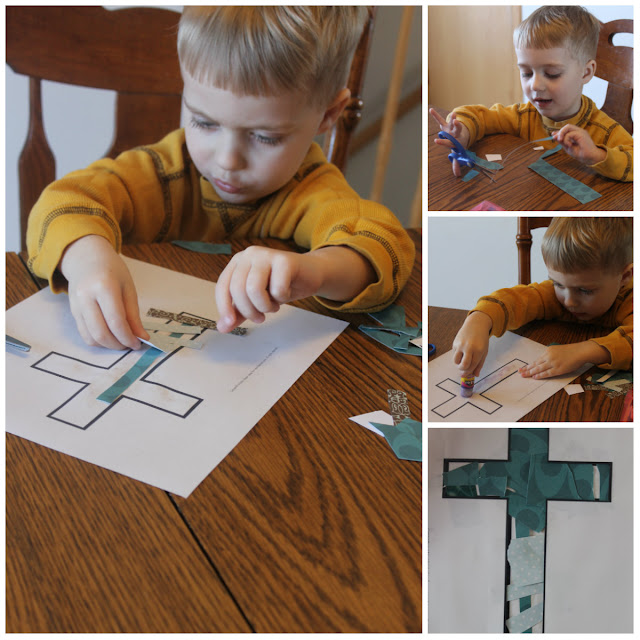 First Spenc cut up strips of scrap paper. Ashton was not thrilled to be left out of the cutting process, so I tried to improvise and gave him a playdoh scissors. He's too smart for that trickery and wanted nothing of the fake scissors. I ended up making most of Ashton's cross since the whole scissors debacle upset him immensely, but Spencer did the majority of his on his own. He called it a sandwich because after we glued on all the scraps, we put another piece of paper with a cut-out cross on top of it, like the layers of a sandwich. 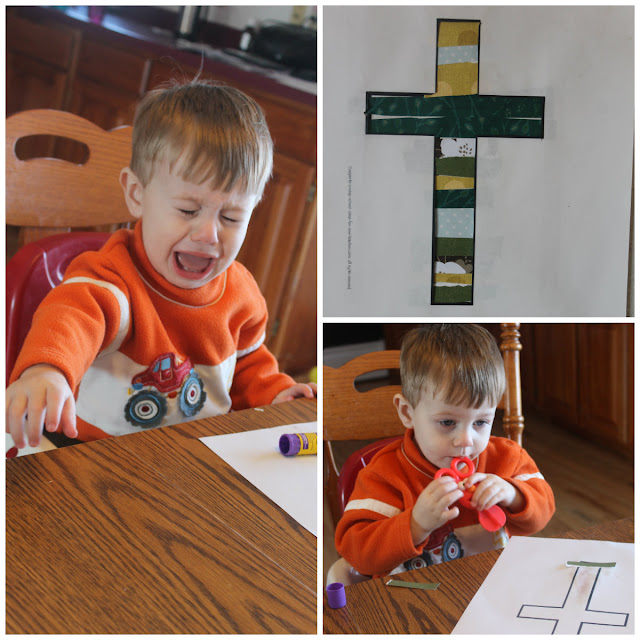 Posted by The Mahlke Chronicles at 1:14 PM