While most of the country shed their big winter jackets and traded them for lighter ones, we were still smothered by the weight of our bulky layers. While others were basking in warmer temperatures and enjoying green landscapes, we were staring at muddy snow drifts and planning our outdoor escapes. But finally--oh my gosh, FINALLY--Minnesota showed signs of the highly anticipated season's change. After spending months in near hibernation, we Minnesotans rushed outside this week to enjoy the early signs of Spring. Our Easter was a big soggy, muddy mess this year, but we were happy to be outside nonetheless. (Look for the Easter post early in the week.)

We took our first walk of the season on Friday, when the temperature reached nearly 50 degrees. Spencer insisted on riding his bike and when he got tired, "Daddy could carry it." I laughed and laughed at this idea because I could visualize it clearly in my mind. Spencer pedaled and pedaled his little legs and made it nearly halfway around the lake, which is farther than we thought. As we watched our big Little Man make his way on the path, we realized that it's definitely time to retire the Radio Flyer trike and graduate to an actual Big Boy bike. 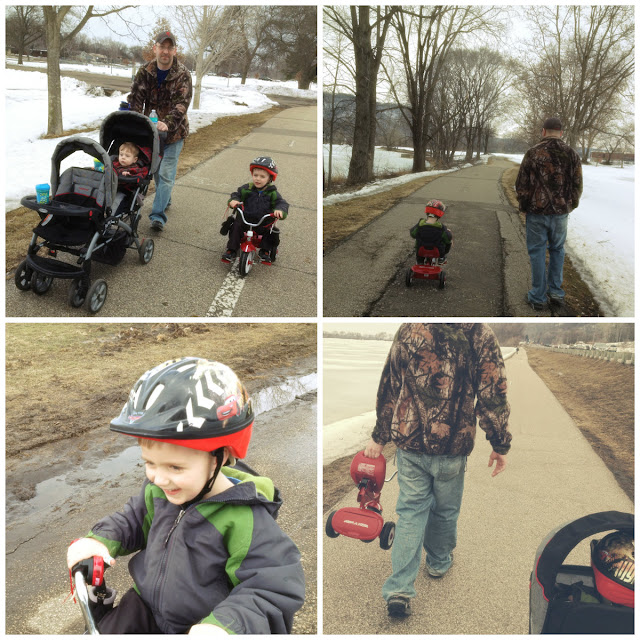 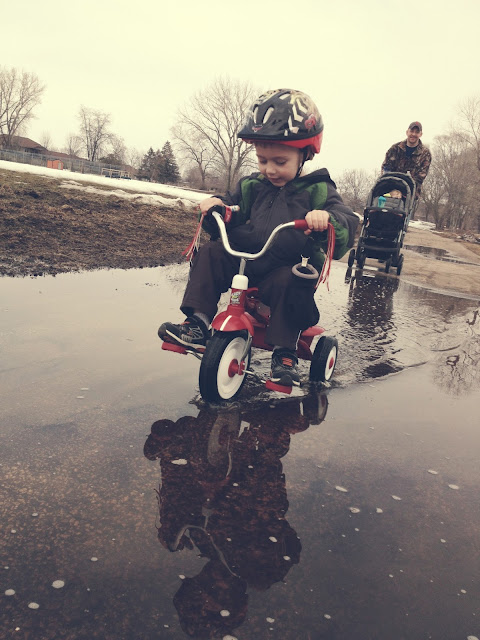 When we were within eyesight of the truck, we decided to let Ashton out to walk the remainder of the way. Except he had other ideas in mind. Snow! He could not be steered away from the brown snow for anything. Instead of a leisurely stroll hand-in-hand with my toddler as I envisioned, I carried a thrashing, screaming baby to the truck. 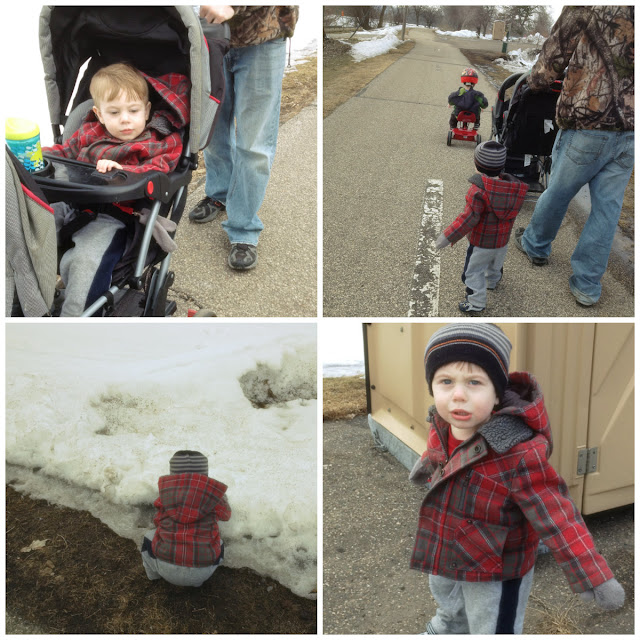 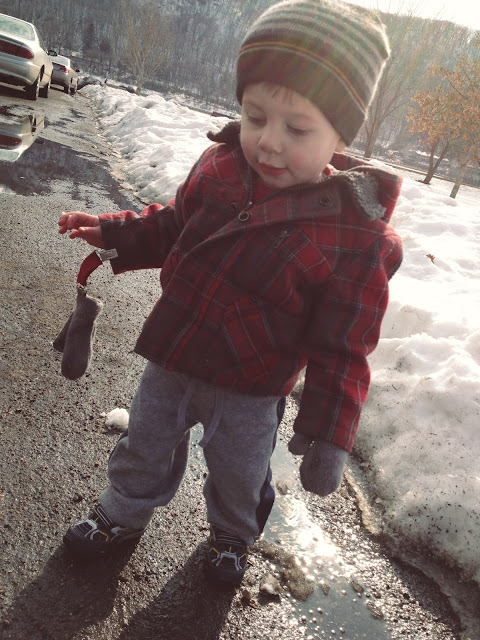 In preparation for the holiday, we did one final Easter project. We drew on eggs by dipping chalk in water. Ashton mostly ate the chalk as a yummy snack, but Spencer really enjoyed the activity. 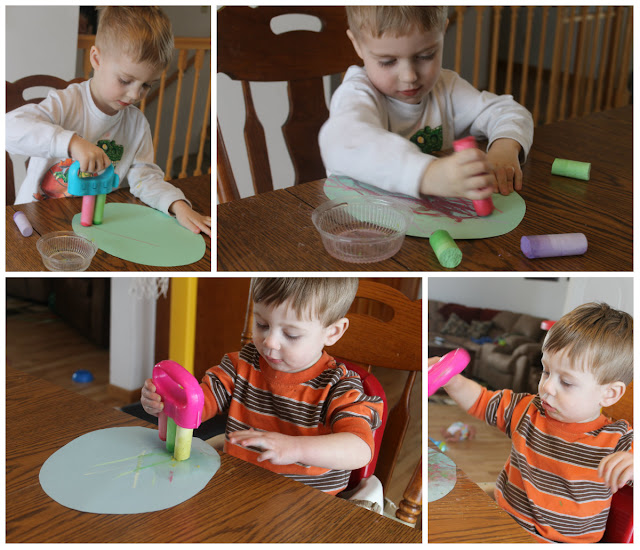 We also visited the infamous Bunny. Every year we make the trip to the mall with our good buddies. Last year Spencer finally overcame his fear of the funny life-sized creature in a furry costume and a Baby Ashton was oblivious. This year it was Ashton's turn to fear It. While my friend's kids ran right up to the Easter bunny and eagerly jumped into his arms for a big hug, mine kept a safe distance. I had to prod Spenc onto the bench next to the bunny and place a screaming Ashton on his lap. I quickly took a few pictures--snap, snap--and rescued my terrified kid. But all was right with the world soon enough when the kids were romping around the mall play area, the traumatic experience long erased from the little guy's memory. 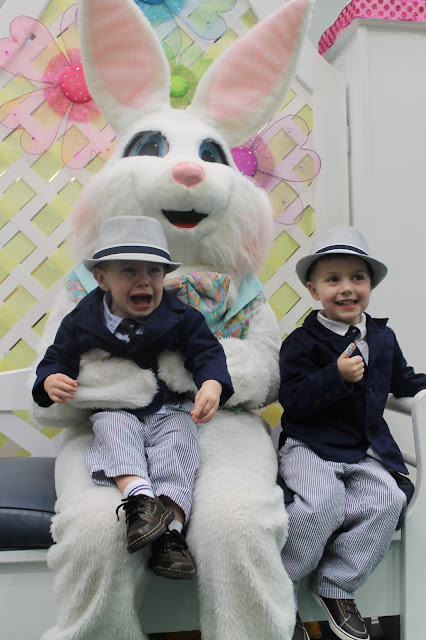 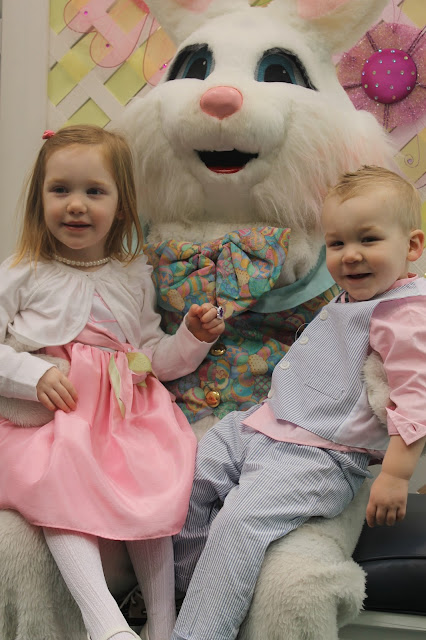 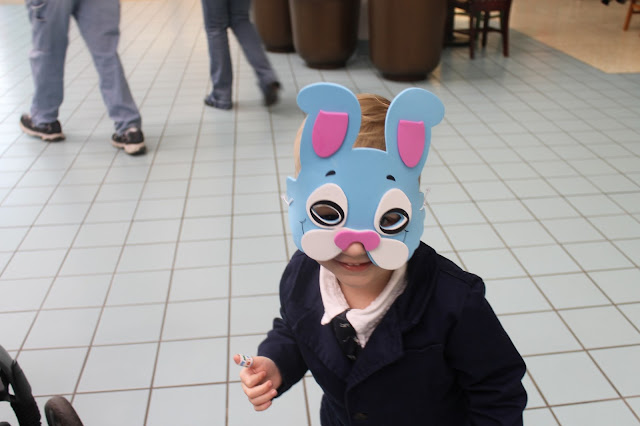 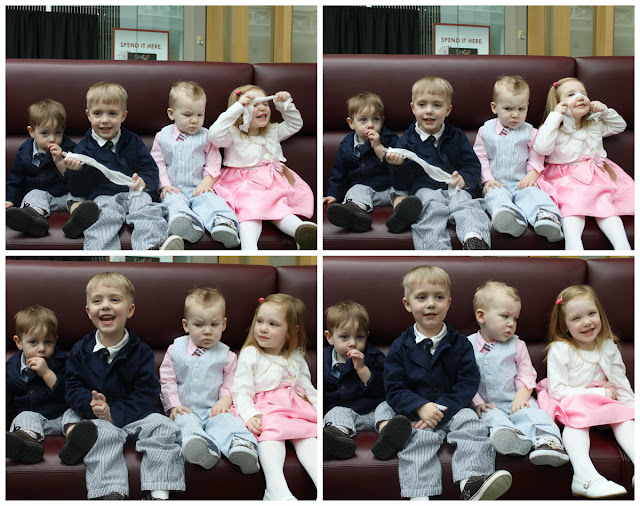 This weekend we participated in the community egg hunt, which really is less of a hunt and more of a mad dash to snatch up the eggs placed on the ground in sections by age. Ashton was very excited, trying to sneak some eggs before it was time, until he saw It. Once the Bunny appeared within eye sight, poor, traumatized Ash just wanted out. 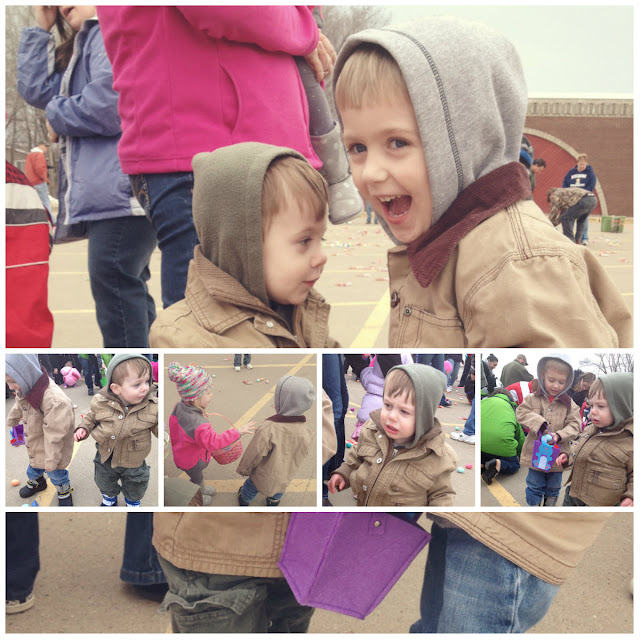 
Just because Spring has sprung, don't be fooled into believing the cold and flu season has melted away with the snow. Oh no. No, no, no. In fact, it hit our house again this week. Wednesday claimed Victim #1--me. It was the day we were supposed to go on a school class field trip. Ride a school bus! Visit a children's museum! Eat at the mall! I couldn't let my kids down, yet I'm pretty sure school buses aren't equipped with bathrooms, unless that has changed since I was a kid. Daddy to the rescue! Dave left work for a few hours to sit in for me on the field trip. I met them at the mall for lunch and was able to see them get off the bus. (In case you were wondering, Victim #2 got hit harder than me. Much harder. Poor Daddy.)


Some randomness from our week:

Posted by The Mahlke Chronicles at 6:43 PM