The start of it all.
It's that time of year again, where plans are being made, traditions repeated or started, lights and decorations take up residence in our homes, and an overall giddy feeling of excitement you can't quite contain starts bubbling inside, anticipating the festivities that come with the holiday season. There's also the craziness of cramming much too much in, scurrying to finish last minute projects, coordinate around numerous schedules for get togethers, and the exuberant expense that can accompany this time of year as well. It becomes a balancing act of enjoying the true meaning of the season and embracing the imperfect moments.

I am the farthest thing from a Grinch or a Scrooge (although my husband could quite possibly be accused of both at times throughout the month of December, probably due to my excessive love of the holiday), and thus began our holiday season this week, with some new and old traditions.

I made a felt board for Spencer. He dressed up the snowman and decorated the tree, then took it all off to start over again. That was fun for 20 minutes; now he has lost all interest. (And he was quite mad that the snowman doesn't have actual arms, just mittens.) 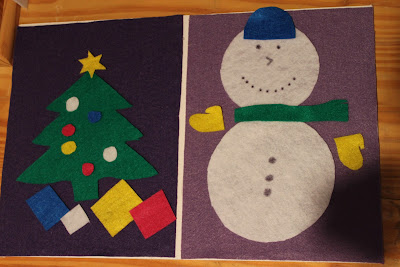 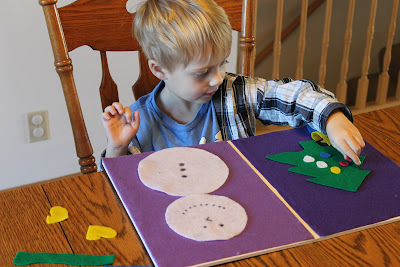 We went to a live Nativity for the first time. It was outside on a cold, crisp night, creeping up on our once again sick baby's bedtime. And these two horribly irresponsible parents neglected to pack mittens for the poor child. Thankfully I stuffed some gloves into Spencer's jacket weeks ago when the weather turned cold, so his hands were warm. Ashton made it partway through the skit before David took him back to the van for some warm snuggle time. Spencer and I watched, mesmerized, as we experienced the story of Jesus' birth, complete with a chorus of angels and real animals. We've been reading the Christmas story to him from his Children's Bible nightly, but it's always a treat to witness it in person. 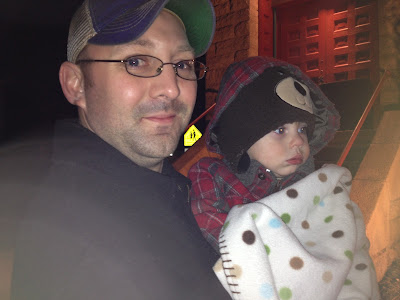 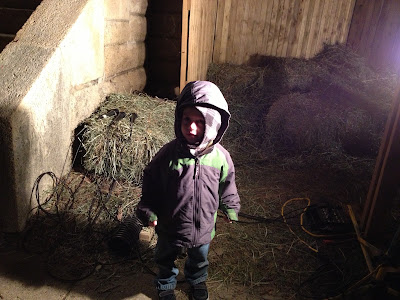 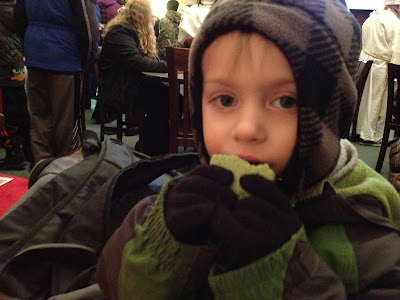 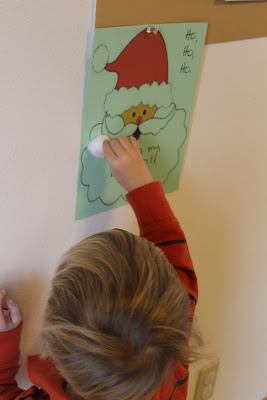 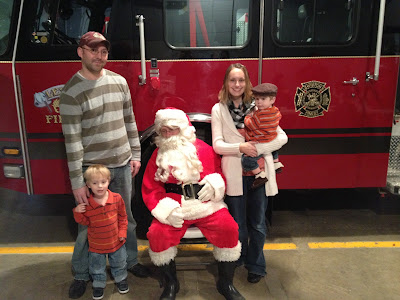 We visited Santa at the local fire station for our third year in a row. We still were not successful at getting the kids to take a photo without us, but I guess it can be our traditional family Santa picture. At least there were no tears this year.

What would the holidays be without a tree? We always talk about being one of those families that hunts for the perfect tree in a field full of Christmas trees, cutting it down ourselves and then hauling it home. But, in the end, we drive to a lot filled with pre-cut trees, weaving through the rows in search of the perfect tree that someone else already cut down for us instead. (And it must be said: since when does it cost a small fortune to buy a Christmas tree?!) Maybe one day when the boys are older we'll fulfill our fantasy of being one of those other kinds of tree-cutting families. 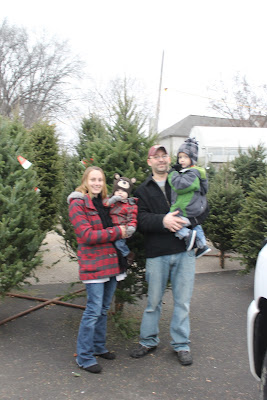 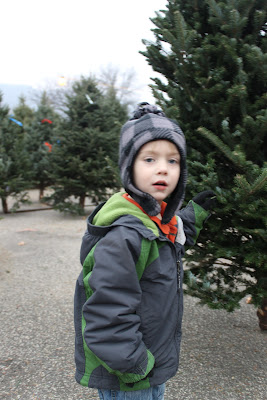 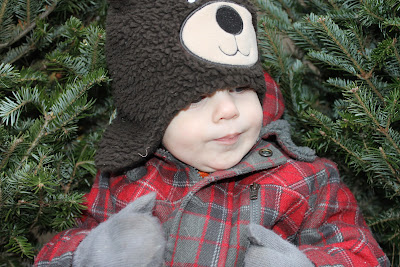 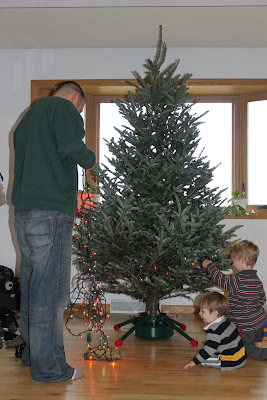 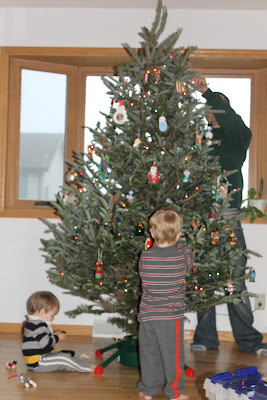 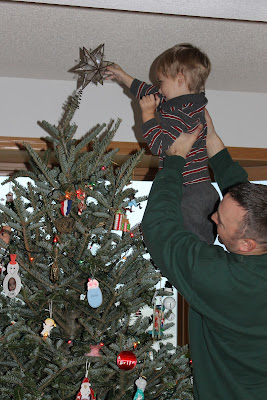 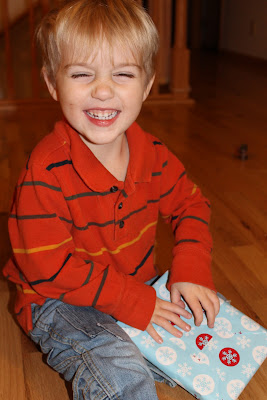 December 1st marked the start of a new tradition. While we were out shopping for a tree, Santa stopped by with a letter and some presents. Santa said that he'd stop by each week with some gifts, but we need to return the favor and give some gifts to others as well. The whole receiving part Spencer accepted whole-heartedly, but the giving part took a little coaxing (ok, threatening to take away his gift from Santa). Apparently, Santa has good timing with his lesson on the gift of giving, because there's a three-year-old living in this house that could definitely learn a little bit about that. 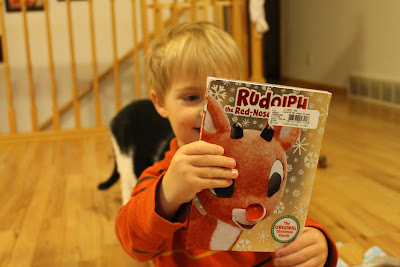 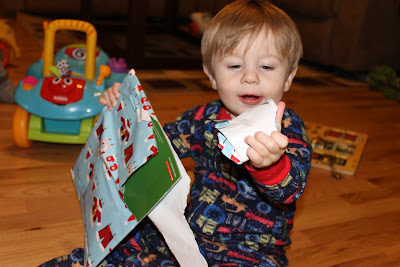 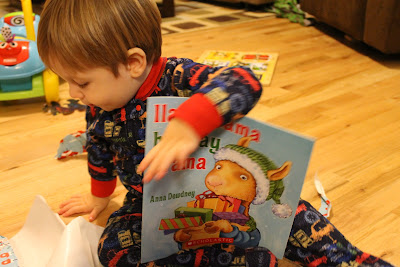 We test drove our gift giving this weekend when we babysat our friend, Bryson. Spencer picked out a car from his own personal stash and I wrapped it up in Christmas paper. Project Gift Giving Attempt #1 was a success! Now on to #2....Could it be you?
Ashton growing.
Ashton came upon the 13 month mark last week. Here are his most recent growth pictures. 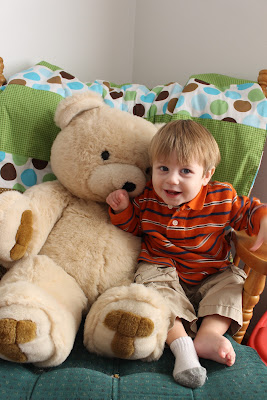 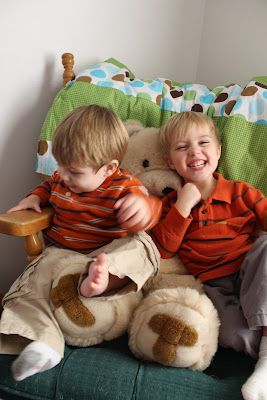 He also hit a very important milestone this week: his first word. He's been mumbling mamamamamama for what seems like forever, but I couldn't quite attribute the garbled baby talk for an actual word..until Tuesday when he finally said MAMA clearly. Of course I caught it on video as proof.

A family visit.
We were very lucky to be blessed with a visit from Uncle Bryan this week. He was in the area on business, and came bearing gifts. The only thing that could have made the visit slightly better for the boys is if he brought their cousins. They had a blast playing with their uncle, and Spencer took a huge liking to the piggy bank school bus he brought them, so much so that he was pretty much inseparable from it. 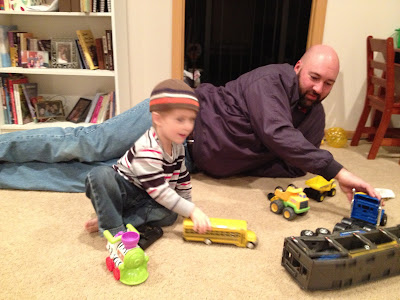 Mommy Photography.
I did a quick photoshoot with the boys to use for the Christmas card. 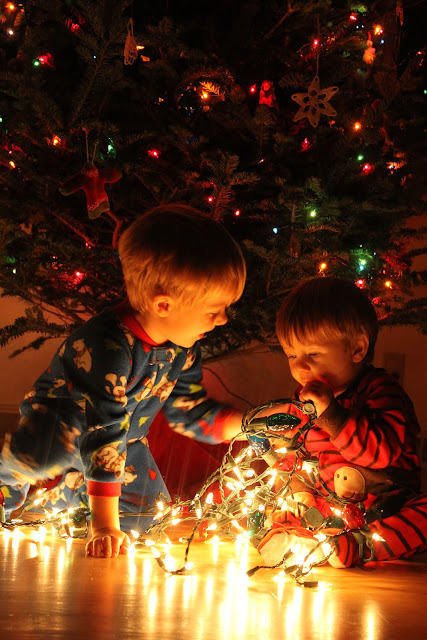 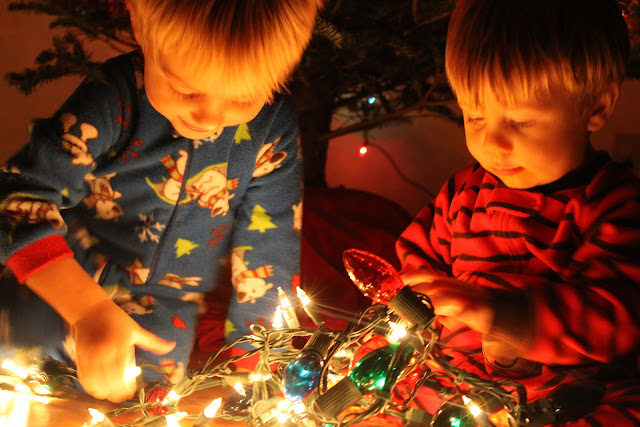 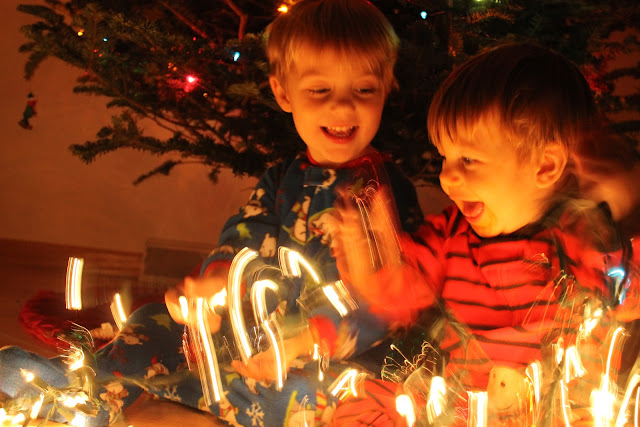 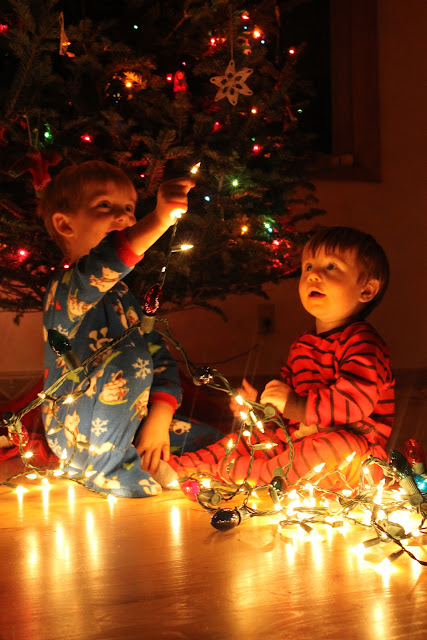 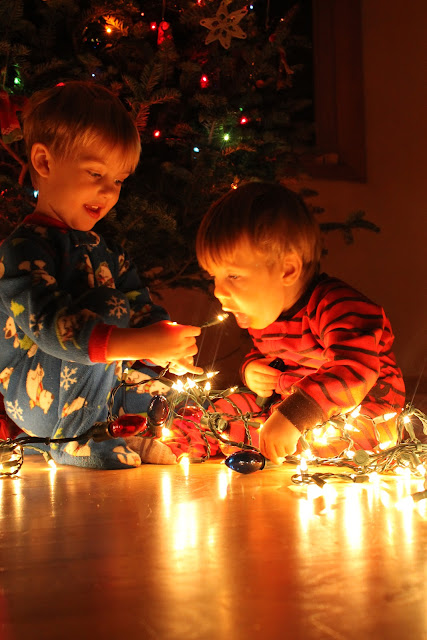 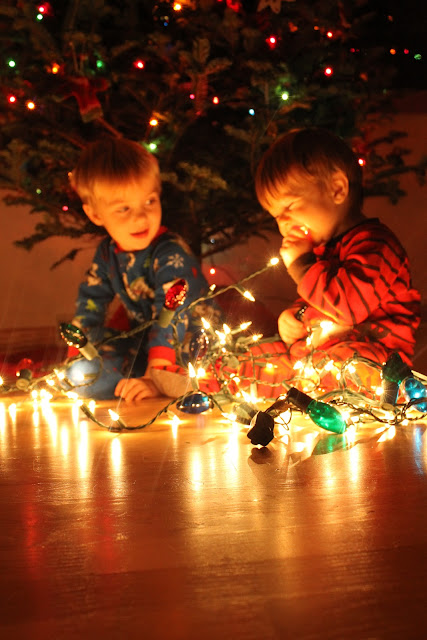 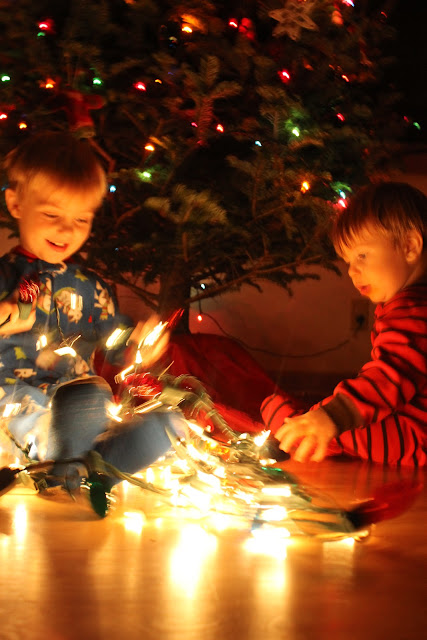 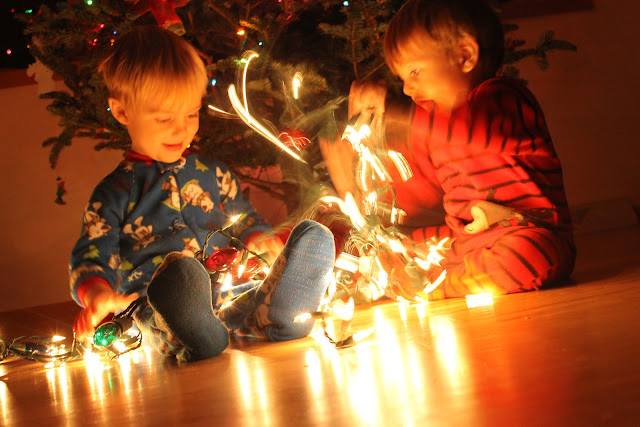 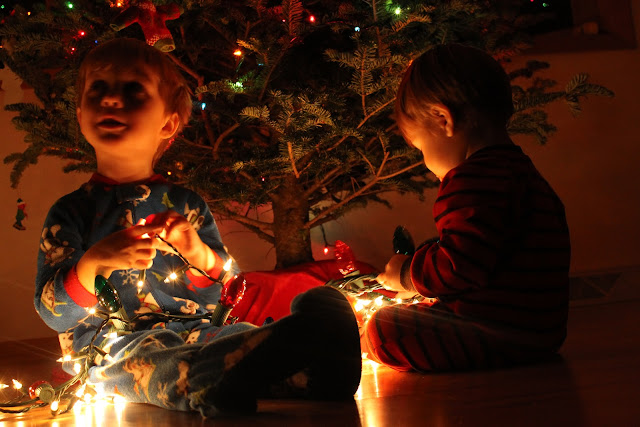 More randomness.
I've been working hard on a lot of homemade Christmas gifts (some that even threatened major injuries--hot glue guns are dangerous!!), but I cannot post a lot of them until after the recipients open them. And somehow I didn't take a million random pictures this week. Weird, right? 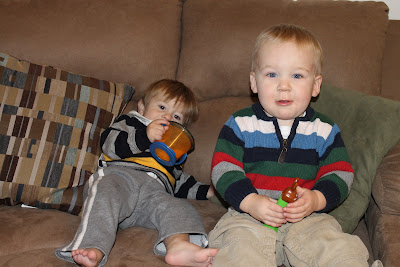 Posted by The Mahlke Chronicles at 8:38 PM