Some fun with the letter S

The letter S was a lot of fun. I had a whole list of things for us to do. We started right away on Monday morning by making a spider out of a number 8. As I was cutting out the 8, Spencer was practicing his scissor skills, too. I keep trying to get him to properly use a scissors with one hand, but he can't seem to master that skill quite yet. We punched 8 holes and then Spencer laced colorful pipe cleaners through the holes to make legs. We incorporated a lesson of counting and identifying colors as we did this. Then for the final touch, we glued some wiggly eyes onto our spider. 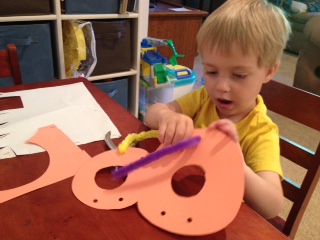 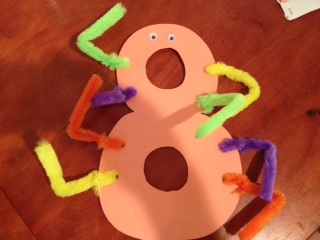 Monday afternoon we ventured outside for more S fun. I whipped together some sidewalk chalk paint by using water, cornstarch and food coloring. The paint was very soupy, so I was skeptical. I thought it'd end up drying much like water on the pavement in the hot sun. Boy, was I wrong! It was very neat the way it dried looking like chalk. We had a lot of fun painting. In fact, we painted more than just the driveway. We hunted down the perfect rocks to paint. Then when Spenc decided that wasn't enough, he painted the wagon, the stones bordering the flower garden and even the bricks on the house. Whoops!

We took a day off from our projects on Tuesday to go on a play date with our new friends, Jenn, Victoria and Eleanor. We hiked to the park in their neighborhood and played before having a picnic lunch. We were having so much fun that we lost track of time and stayed well into their nap times. Both boys crashed on the drive home. Luckily they still slept in their beds once we got home.

Wednesday morning we resumed our projects by having fun with a bar of Ivory soap. We stuck it in the microwave for a few minutes and watched it grow and grow and grow into a big puffy white cloud. Then the boys played with it in the bath for a while. It got the water very sudsy and Spencer kept wiping the soap into his eyes. Other than that, they enjoyed their soapy bath and got very, very clean.

Wednesday afternoon we focused on how Spencer's name starts with the letter S. We used stamps to spell out his name. I had made some homemade stamps by gluing puffy letters onto old bottle caps. We also used an assortment of other letter stamps as well. As soon as Spencer saw the ink pad, he told me he didn't want to do foot prints. I just laughed. That kid has the best memory. He was thinking of the time I did Ashton's foot prints when he was a newborn baby. Of course Spencer had to have his done as well. Ultimately while we were stamping on Wednesday, Spencer stuck his foot in the ink pad anyway. Silly boy. We did two pictures with stamps. I used one to make the Ss flashcard.
Our Baby and Me class was cancelled today due to a power outage at the school, so we improvised and spent some time at the public library instead. We had a lot of fun sitting in the Lego corner. We played and read stories and played some more. 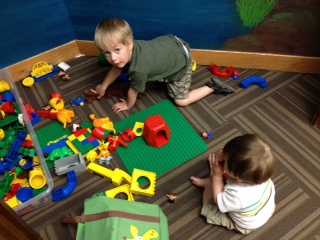 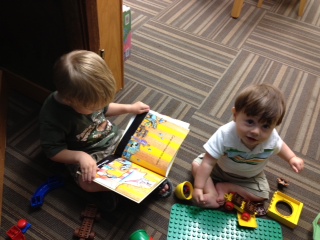 Once we got home from the library we did more S projects using shaving gel. I mixed some shaving gel with Elmer's glue and Spencer used that as a puffy, sticky paint. Then he shook some red, blue and silver glitter onto it to make an impromptu Memorial Day picture. After two pictures, he grew bored of it. I sprayed the rest of the shaving cream into the water table and let Spencer have fun! 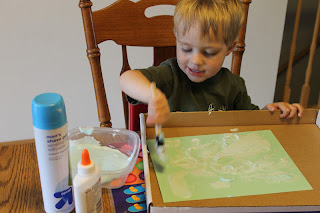 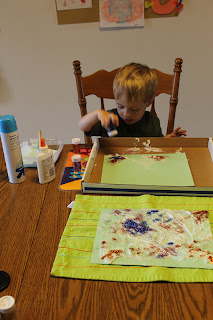 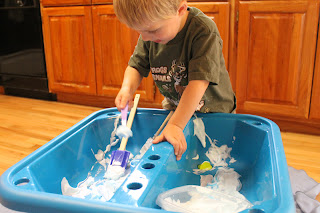 This week my baby turned 7 whole months old!! He is now well over the halfway mark to one and I'm in complete denial. The other day we stuck him in a highchair at Culver's and he seemed so big and grownup. We weren't sure he was sturdy enough to sit in it, but he proved us wrong. He happily munched on his Baby Mum Mum and let us eat our meal without so much as a whine or complaint....unlike his big brother! 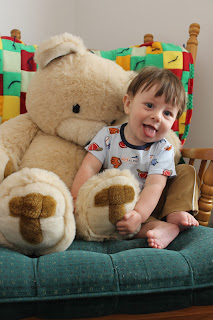 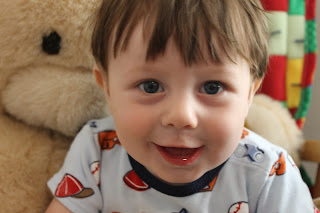 I've been working on a project of my own for a while now--our living room. It's been a work in progress because I don't have much spare time to get stuff done. I finally completed it! Yay! Now to tackle the hundred other projects on my To Do list. 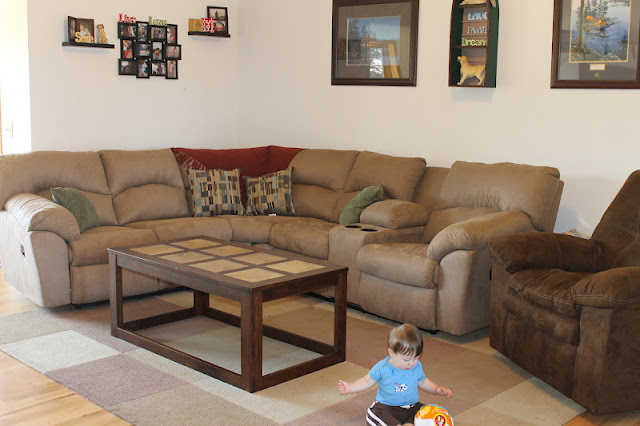 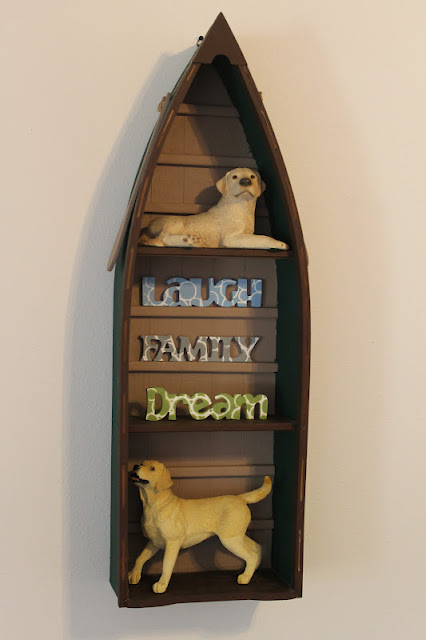 We have a busy Memorial weekend ahead of us. The thing Spencer is most excited about is our train ride on Saturday. Chug-a-chug-a-chug-a-chug-a-chug-a-choo-choo! That's all I hear all day long. He suddenly developed an even bigger obsession with trains since learning about our impending train ride. He thinks we're riding the Dinosaur Train and will go fast under tunnels just like the cartoon. I drew a train and stuck it on our calendar. We've been doing a daily countdown until the big day. The kid is very excited! 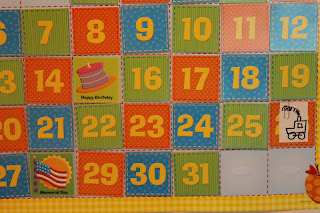 I'll be posting our Memorial weekend fun later. In the meantime, enjoy more random pictures from our week.

Posted by The Mahlke Chronicles at 8:52 PM