I'll be enjoying mine with our traditional lunch at John Hardy's. Afterwards I'll kiss my lovely family good-bye and I'll savor each wonderful moment alone while doing some shopping. Then I'll complete my day with my husband's famous steaks and mashed tators and gravy.

I absolutely adore being a mom and can't express how my life has changed since becoming one. It is the best job (and, yes, it is definitely a job!) I'll ever have. It's nice to have a day to recognize mothers as I don't believe we give enough daily credit to our own mothers and grandmothers. Thank you to my own mother and mother-in-law and all the grandmas! I love and appreciate you more than you'll ever know. Without your influence in my life, I wouldn't be the mom that I am today.

This week we started the letter R, but we weren't able to finish all the projects ideas, so we'll continue where we left off next week. The theme this week was rainbows. We first hopped on the computer to do a little research to get Spencer acquainted with rainbows. Then I rubberbanded a crayon of every color of the rainbow together and Spencer colored with it. He wasn't too excited about this and was more interested in the rubberband itself. I made the upper and lower case R flashcard out of the picture he created.

Our second activity was a science experiment. We dropped some food coloring into a bowl of milk. After adding a small squirt of dish soap, we watched the colors slowly combine and do some funky things.

We also made rainbow rice by adding food coloring and rubbing alcohol to uncooked rice. Then I poured the rice into the water table and let Spencer play with that on the deck. My husband informed me that we were most likely killing birds, but I honestly hadn't thought of that. My concern was the mess outside versus in my house. Oops! 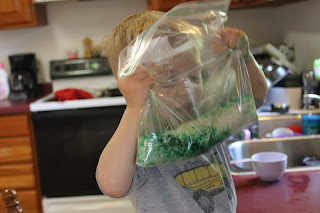 Since it is Mother's Day weekend we also made some cards for all the grandmas. I'll admit this project was 90% me and 10% Spencer, which I try to stray away from. I saw the idea on Pinterest, though, and thought it was cute. I first traced both boys' hands to make a stencil so I didn't have to keep tracing them over and over since there are quite a few grandmas. Spencer set to work coloring a bunch of pieces of construction paper to use for the cards. Then I traced, cut and glued their hands. We also used this card idea for the first birthday party Ashton was invited to. His friend Eleanor turned one and her party was this afternoon. I prefer giving homemade cards whenever possible. It just gives that personal touch. 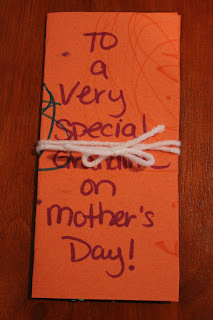 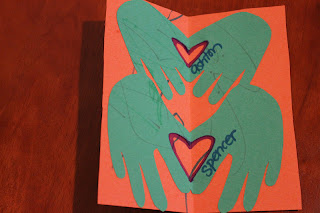 Some of the things that come out of Spencer's mouth these days crack me up. He informed me that I am not Ashton's mommy. I am only his mommy. He understands that his daddy and Grandma Amy are also Ashton's daddy and grandma, but he is not willing to share me or his Marmer. And he also thinks that Ashton is no longer a little brother; he is a big brother now because he is big and can sit up and eat and play with him. He is constantly saying, "Ashton is big now, Mommy." 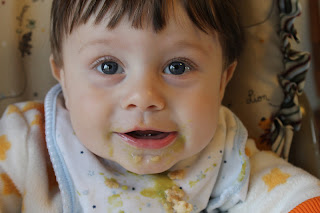 Indeed, Ashton is big now. He is eating more solids. He tends to prefer the actual baby food over the bland rice cereal. It is funny watching him to try pick up the Puffs and then get them in his mouth. They tend to get stuck to his fingers or end up on the floor. Ashton also slept all the way through the night last night. He woke up twice, but was able to put himself back to sleep without the aid of nursing. By the morning I was both excited and a little sad. Excited for sleep!!! Sad because I missed the middle of the night cuddle session with my ever-growing baby. Although I long for the uninterrupted sleep I once enjoyed, I still covet the precious and rare alone moments with Ashton, especially since I know his baby days are numbered. Soon he will be a toddler and I'll be joking with my friends about selling him or loaning him out until he's four like I did with Spencer earlier this week. See the below evidence.

Spencer took it upon himself to get his own snack while I was showering. Apparently he was really hungry because not just one box, but two, were dumped onto the coffee table. That random naughtiness is more humorous than frustrating, but his attitude as of late is maddening. People keep telling me that age three is worse than two. As we approach his third birthday I wonder how I'll be able to handle another whole year of this Spencer. Where'd my sweet baby go?

~~**~~
My friend, Ann, and I decided to turn Thursday nights into weekly play dates. This week we walked to a park (not an easy feat with an unwieldy double stroller packed to the max) to have a picnic. Thankfully the weather cooperated and we had a great time. 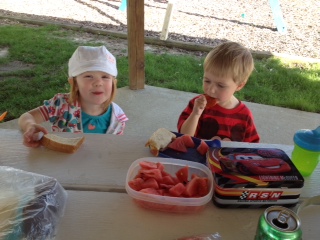 We also hit up a bunch of garage sales this week. I was able to get some of the boys' summer wardrobe and Spencer's Halloween costume. The best purchases were a wagon and a potty chair. We had to take the wagon for a spin, of course. The wagon has two seats but isn't as neat as the Radio Flyer ones that come with seat belts, so I stuck Ash in the center so he wouldn't flip over the sides. (I have discovered the scary way that he needs to be buckled at all times!!) The potty chair is our last ditch effort at training Spencer. He has no interest and we are getting desperate. We just had the kind of seats that sit on top of the big toilet. My friends suggested getting the actual potty chair and setting it out in a public room so Spencer can sit on it whenever and wherever he wants. We set him on it in the living room this morning while watching Mickey Mouse. He even surprised himself when he peed! After cheering and high fiving and celebrating, he got to decorate the seat with a sticker. (He choose Donald Duck, or as Spenc calls him, Mickey Mouse Duck.) Hopefully this new potty chair will do the trick. If not, we're only out a buck. Gotta love garage sales! 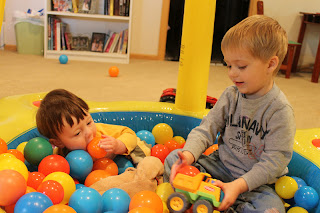 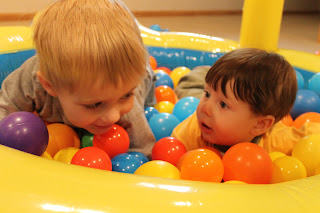 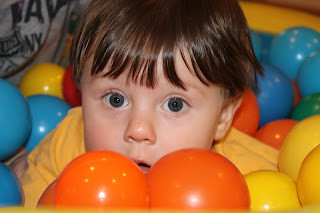 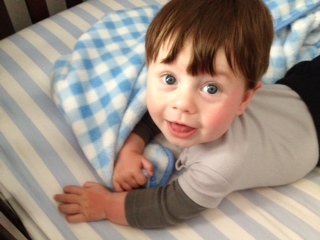 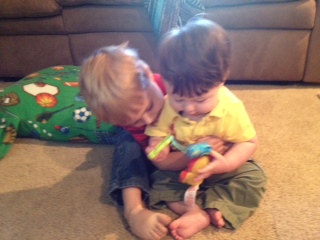 Posted by The Mahlke Chronicles at 7:41 PM