Last weekend began our Easter holiday festivities when we visited the Easter bunny at the mall with some good friends. Normally Spencer is terrified of these holiday creatures, but surprisingly he did very well. After the pictures the kids played in the play area and then we ventured to eat an early supper at HuHot Mongolian Grille. It was just me and my friend with our two children apiece, which we didn't think anything of since we're used to juggling our own kids by ourselves. But, apparently, other people were impressed because a random lady came up to our table to applaud us on our well-behaved children. 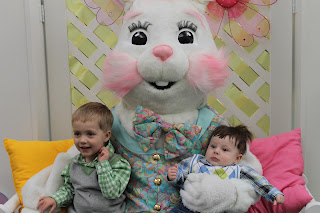 During the week we did some holiday-themed projects and activities. First we decorated the house with our baskets and plastic eggs. (That darn bunny always comes early to the Mahlke household and fills the family basket with the oh-so-tempting chocolate!!) Spencer enjoyed going on an egg hunt in our basement. He preferred finding them to hiding them for me to find. He didn't quite understand the concept of hiding each egg in a different location. I'd typically find all the eggs in one spot. He wasn't very creative in his hiding spots, opting to reuse the ones I just hid his eggs in. And he most definitely did not enjoy waiting in another room while I hid the eggs. We did this for a full hour one day while Ashton napped. Then later Spencer enjoyed playing with the eggs by himself throughout the following days, and he even roped Daddy into an egg hunt or two as well.

We dyed eggs another day using Kool-Aid packets mixed with some water as our dye. Apparently Kool-Aid loves little boys hands, because Spencer's were bright red by the end of the activity. He absolutely loved it and was disappointed when he dyed the last egg, so I improvised and cut some coffee filters into eggs and let him "dye" them by spooning the Kool-Aid water on them. Not wanting to exclude my little guy, I plopped Ashton into the highchair and let him play with some plastic eggs. I'm not sure who was more excited about that--Ashton or Spencer. Ash loved gnawing on the eggs and Spenc got a big kick out of his little brother "participating" in the project. 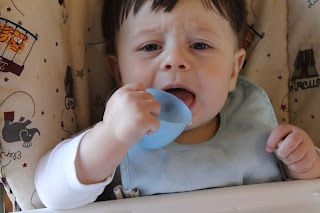 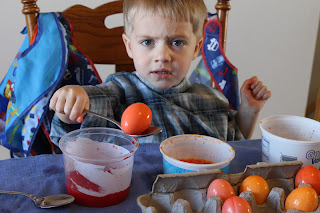 As I blogged earlier in the week, Dave celebrated the 9th anniversary of his accident in Iraq. The boys and I made a card and a birthday banner for him. This, of course, involved foot prints. What else? Spencer very much enjoyed painting Ashton's foot and kept saying "tickle, tickle" since his own feet are very ticklish. But then Spenc didn't want to be done painting, so I got out some paper, which I later turned into an Easter egg that is hanging on our Artwork board along with his other Easter pictures. 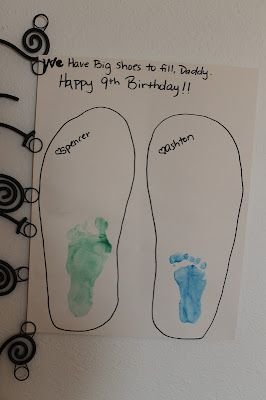 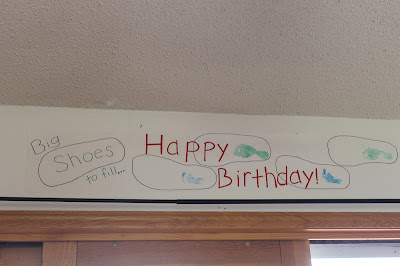 We celebrated Dave's big day as a family on Wednesday with some Thai take-out (Spencer invited Mickey Mouse to join us for supper) and a walk around the lake. Then Saturday we continued the celebration with some good friends at our house. We BBQ'd ribs and ate a LOT of yummy food. Since posting the video that reflected on Dave's accident, we have received some great feedback. Thank you; it's very much appreciated. We're glad his story has touched you.

Also this week Spencer was a "big boy" by being allowed to play outside on the deck by himself. I grapple with the line between letting him be independent and worrying about his safety. I folded laundry while he played on the deck. I could see him through the sliding glass door, so I felt comfortable about this arrangement. I don't think I'm quite ready for him to be off playing in the yard by himself where I can't see him as well out the window just yet. Baby steps. 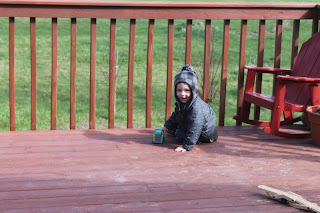 Ashton's new obsession is rolling over from his back to this tummy. I would be thrilled with this, except he has decided to do it in his sleep. He wakes up screaming because he is stuck, so then we have to go in and roll him back onto his back. I did finally catch him on camera, though. I've only been trying for a few weeks now! 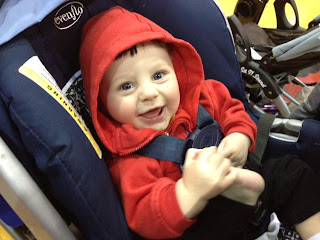 Today we participated in our second Fools 5 race. It's our town's cancer fundraiser. Last year my friend and I walked the one mile together. Then we each had one kid in a single stroller. Ann was waddling along about to pop out her second kid and I was barely pregnant with Ashton. We finished nearly last out of huge group of participants, being passed by people running the 8 mile option. This year we finished in the middle of the pack pushing our double strollers (which one man commented should come with a "Wide Load" sign). It's amazing what one year can bring. After the race we enjoyed some snacks and music at the high school. 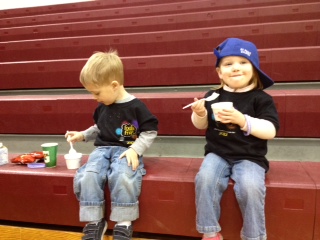 Here are some more random photos from the week. And, yes, I do take pictures every single day! When my Canon isn't near, I have my trusty iPhone. 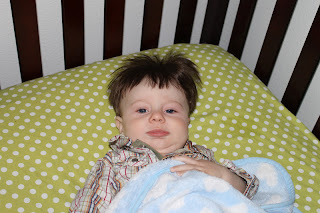 Posted by The Mahlke Chronicles at 9:15 PM