Spencer is getting much more vocal these days. Some days I almost miss the "quiet" days. Dave often is stumped by what comes out of Spencer's mouth and looks to me to translate. He said he isn't as fluent in Spencenese as me. Even I struggle to comprehend what he's saying sometimes, but his vocabulary is definitely broadening and his pronunciation is developing. He has grown fond of consonants. Or maybe more accurately, he has decided everything needs a T, even words that don't contain Ts. For example, park is now "parTtt."

To help in teaching in colors I decided to incorporate real world learning. I have been using the traffic lights to teach him red and green. I should have realized that would come back to haunt me. Now he has taken it upon himself to become a conscientious backseat driver and yells, "Stop, Mommy, stop! Red means stop!" He told Dave the other day that Mommy does not stop, she goes fast. ;)

On the learning note, this week we had fun with the letter N. We focused on his name. Using scrapbook stickers, we decorated upper and lower case Ns with the letters of Spencer's name for our Nn flashcard. Then we drew his name on a piece of paper, talking about each letter. He especially liked S since it is like a snake. Of course we had to incorporate tracing our hands since no picture is complete without it. Another day we played with nails. Not real nails, of course. We pounded golf tees into a box with plastic toy hammers. I chose a variety of colored tees and instructed Spencer to pound in specific colors. He pretty much just guesses colors still, unless it's green. He's got that one down!

This week we had a special visit from some family. My Grandma Faye, mom and sister, Hope, came for a few hours since they were in the area. It is always great to spend time with family, and it's fun watching my boys interact with them. My grandma paid me one of the best compliments ever when she told Ashton that his mommy must be doing something right ;) 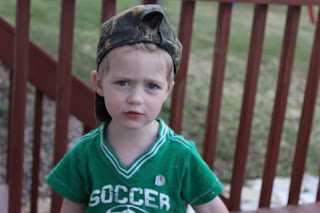 It was rainy on and off all week, so we didn't get to enjoy as much time outside. We did manage to sneak in a few odd moments of outdoor fun here and there. Mostly we tried to make the most of being inside. I pulled out the neglected water table and filled it with soapy water. Ash even got a kick out of splashing his hands in it. 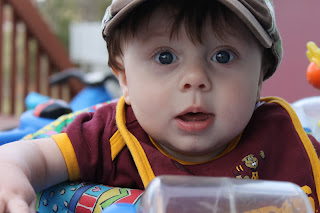 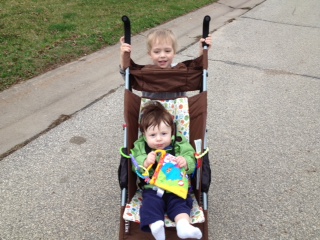 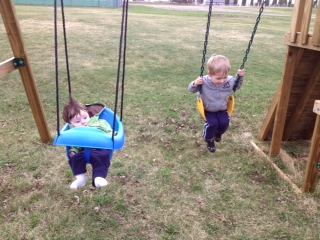 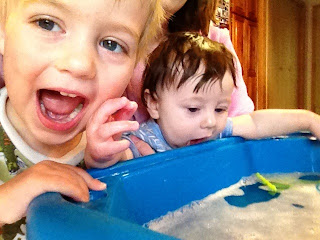 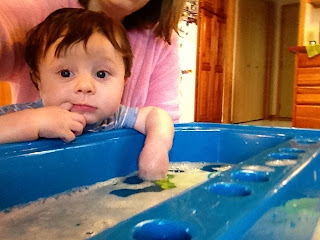 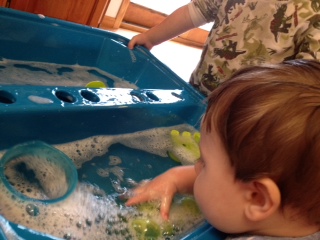 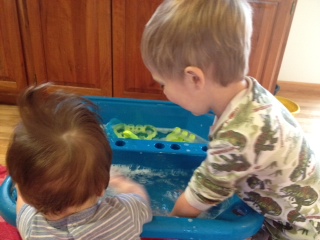 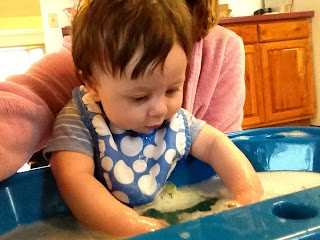 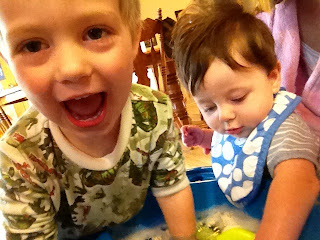 We hit up Chuck E Cheese's tonight and Spenc had a blast. He left a bit overloaded and needed to be carried out. He is just like his mommy where people and loud noises and a lot of stimulation tend to wear him out easily. 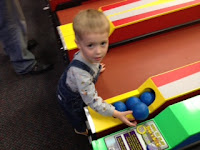 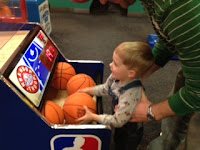 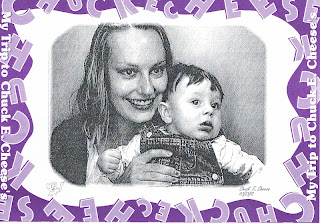 Both boys got haircuts this week, too. It's absurd to think that my 5 month old baby got his hair cut twice already! I debated cutting Ashton's hair really short because of the stubborn cowlick that creates his signature crazy hair, but I just couldn't do it. He's only a baby for so long; I wasn't ready for him to look like a big boy. 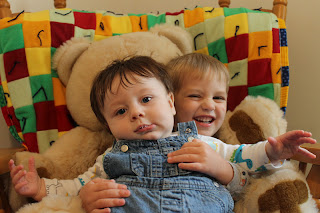 Today is Ashton's 5 month birthday. The time is going too fast and I don't know how to slow it down! He is now rolling from tummy to back and back to tummy. He often gets his arm stuck under him when rolling from back to tummy, but he's working on it. He's also working on getting some teeth, so he's munching on everything he can get his hands (or gums) on and drooling like crazy. I think this has caused disruption with his sleep patterns because he is suddenly getting up 3-4 times at night again. I don't know how I functioned off such little sleep like this for four months straight!

Posted by The Mahlke Chronicles at 8:45 PM