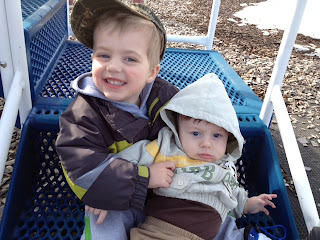 We really enjoyed the nice weather this week as much as we could. Maybe we got a bit too eager, because it was still pretty chilly. But after being trapped indoors for so long, we sucked it up for a few brief afternoons of outdoor fun.

Tuesday we set out with good intentions to walk the four mile square around the country roads and into town, stopping at a park along the way. We made it about a half a mile before turning around. The wind was so strong, I felt like I was pushing 100 pounds! Instead we hopped in the trusty van and just drove to the park. Spencer loved it! Ashton didn't seem to mind it either. 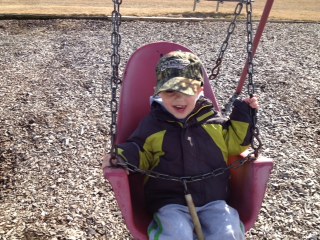 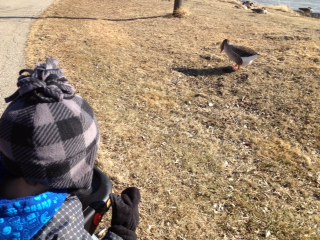 Then Thursday we attempted more outside fun, but it was frigidly cold down by the lake. Spencer really wanted to see the ducks, so we bundled up and went for a short walk on a duck scout. We spotted a bunch of ducks and geese. The fun thing about the wild fowl at the Winona lake is they are so used to people that they literally do not scare easily. We got right up to them, which is pretty exciting for a two year old. 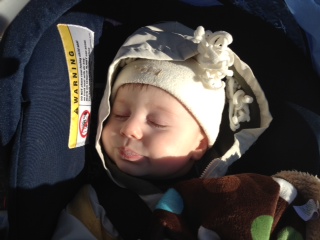 Besides our outdoor fun this week, we also focused on the letter L. It's fun watching Spencer on random moments point out letters. Granted, he can never identify the letter correctly, but at least he understands what letters are. Our first L project started Tuesday and we didn't finish it until Saturday. We made lacing beads. I found this idea on Pinterest, which is my new OBSESSION. We made the dough, formed the balls, poked holes w/ straws and then waited. The instructions said the dough would take a few days to air dry, but three days later they were still very soft. I popped them into the oven at 200 degrees for an entire morning on Friday and then they finally dried. Friday afternoon we painted them. Saturday morning we finally got to play with them. Spencer very much enjoyed lacing the yarn through the beads. 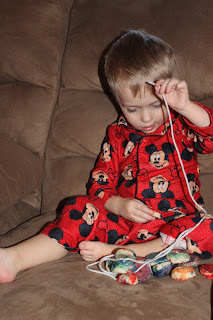 Another one of our L projects was to make lines with tape and then paint. Once the picture was dry, we tore the tape off to admire our tape lines. I used this to make our Ll flashcard. 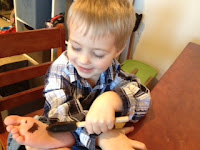 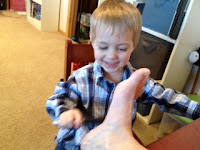 I also got the final project idea off Pinterest (seriously the best invention ever!). We made lions with our foot prints. Spencer got a big kick out of painting my foot and then his own foot. He helped paint the tail and mane. Needless to say, our finished product left a LOT to the imagination. It was fun watching Spencer show Daddy the picture. It took a lot of nudges from me for Dave to figure out what he was looking at. 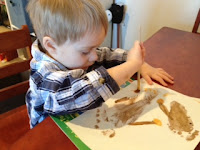 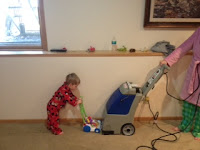 Today we started some spring cleaning. Whenever moisture gets in our basement it starts smelling. I mean, REAL BAD. A combination of must, cat pee and dog poop. Since we spend a lot of time down here, we decided we needed to take care of it. We rented a carpet cleaner and set to work cleaning. Spencer had fun "helping." Hopefully this helped rid our family room and play area of the awful smell!!

Just to update you on the Ashton sleeping front, I'd like to take this time to celebrate the fact that Ashton is now taking longer naps!!! He went from 5-6 30 minutes naps a day, to 3-4 longer naps. He sleeps anywhere from 1 1/2 to 2 hour stretches now. This pleases me immensely!

I also had another Mommy Photography session with Ashton. I took a ton of pictures and was excited to look at them, thinking I had some really good ones. That's when I realized I had never put the memory card back into my camera! All the time wasted snapping pictures without saving them! I quick did a watered down version of the photo shoot again (with memory card this time), but the effect just wasn't the same. Here are the pictures. 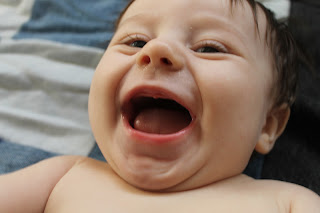 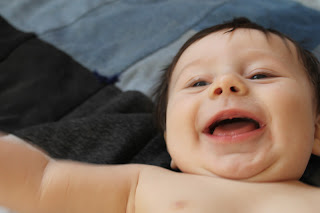 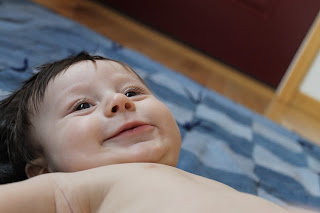