This week was a week of change in the Mahlke household. I began sleep training Ashton. I was very torn on whether to start already. We sleep trained Spencer at 4 months old, and it truly was the best thing we ever did. He's been an awesome sleeper ever since. For some reason, 4 month old Ashton seems younger to me, though. I spoke with the parent educator at our Baby and Me class and other moms and then let the idea simmer a bit. I didn't have an issue waking up with Ashton in the middle of the night. Yeah, I was EXHAUSTED to the point of just barely functioning. But I actually kind of enjoy our middle of the night cuddle time. The thing that was concerning me most was Ashton's inability to put himself to sleep. This especially affected his daytime sleeping. He refused to nap anywhere but on me. It really started to wear on me because I'd spend most of my days either battling Ash to fall asleep or carrying him around once he was finally sleeping. I was constantly telling Spencer to be quiet and he was forced to entertain himself. It wasn't fair to Spencer; it was stressing me out; and I doubt Ashton was getting quality sleep. This is what convinced me it was time for sleep training.

We started first thing Tuesday morning with his nap. The plan was to read to him, swaddle him up tight, nurse him, rock him for a song, lay him down awake and then leave. Then I'd set the timer on my phone for 7 minutes alerting me when I needed to go into his room to comfort him. I set up boundaries on what I could do for comforting, with the number one rule being not to pick him up, because the training is supposed to encourage self-soothing. My comforting involved singing to him and rubbing his belly. Then I'd leave and wait another 7 minutes before going back in to comfort him again. The first two naps did not go well at all. In fact, they went so badly that both mommy and baby were crying. Ashton got himself so worked up that he puked. I was ready to give up and to revisit sleep training when he was a bit older, but I decided in order for it to be a successful attempt, I had to do it a full day.
I was very anxious about the night time training. I was already surviving off little sleep. Ashton was getting up every 1-3 hours and then it'd take me 30-60 minutes to get him back down. I was prepared for the worst and enlisted the help of my husband. We decided he'd take the first night training rotation and then we'd trade off. At 6:30 I got him ready for bed and he proceeded to nurse himself to sleep. I laid him in the crib fully expecting him to wake up in mid-process like was the norm. He didn't move a peep. He slept 6 straight hours, a huge feat for him! Then when I nursed him to sleep again, I was a little disappointed because we hadn't been able to test out the sleep training yet. He slept another 4 hours before waking up again. This time he nursed, popped off and smiled at me like, Hey, Mommy, play time!! It was show time! Since it was almost time for Dave to wake up for work, I decided to just do the comforting myself. I only had to go into his room a few times before he was out. There was little fussing or struggle. Once the monitor was quiet, I grew suspicious, so I snuck in his room to see what was going on. I found the most heavenly sight ever: a peacefully sleeping baby. He did it!! I ran to tell my husband and kept repeating, Can it really be this easy?!

Every sleep time since then has been easier and easier. I can't believe how quickly he learned to put himself to sleep!! We just need to work on the length of his naps now. He barely sleeps more than 30 minutes, so he is taking several cat naps throughout the day. It's a huge improvement over this time last week, though. I feel like a completely different person. I'm not walking around like a zombie. I'm actually happy and not irritable. I don't feel stressed and agitated. It's like I'm a completely different person! But a side affect of sleep training I think is important to note: I've learned that sleep is addicting. Once you get some, you want more. 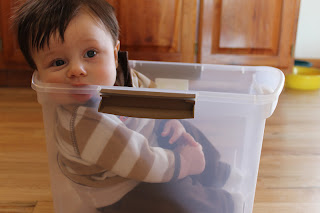 Ashton is still waking 1-2 times at night, but I'm actually very content with that. It was never my intention to night wean him. If he wants/needs to eat, then eat he shall. I'm hoping he'll night wean himself eventually. Until he does, I will savor every ounce of cuddle time I get with my ever growing baby because soon enough he'll follow in his big brother's foot steps and run from the very thought of it.
On the topic of Ashton growing, he had his 4 month well check yesterday. He weighs 14 pounds, 12 ounces (50%) and is 25 1/2 inches long (75%). He is completely healthy and growing like a weed. I did point out something to his doctor that has been a concern of mine. His chest caves in a bit. I first noticed it around Christmas-time when we were bathing him and the water pooled in his chest area. Everyone I talked to brushed it off as his body still developing, but I wanted to make sure. The doctor didn't notice it herself until I mentioned it, but she knew what it was right away. Pectus excavatum. It's a fancy word for sunken chest. Here is the wikipedia definition for those curious:

Pectus excavatum (a Latin term meaning hollowed chest)[1] is the most common congenital deformity of the anterior wall of the chest, in which several ribs and the sternum grow abnormally. This produces a caved-in or sunken appearance of the chest.[2] It can either be present at birth or not develop until puberty.

The pictures I found while googling are a bit disturbing, but it seems to be a relatively non-issue. Some people have surgery for cosmetic reasons, but in rare cases it does cause some health issues with breathing and a displaced heart. I guess only time will tell, and there is no sense getting my knickers in a knot over it. 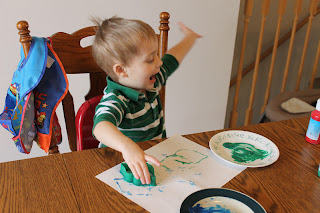 In other Mahlke news, this week we focused on the letter K. We started with making our flashcard by using cookie cutter lips to "kiss" the paper with paint. Then we made a kayak collage out of a catalog from Daddy's work. Spencer loved this project so much that he wanted to make two collages. It's very cute hearing him say that his daddy makes kayaks at work. Afterwards we create a makeshift kayak out of a plastic tote and used a golf club as an oar. Spencer especially loved this and had a great time navigating the choppy water (i.e. Mommy pushing and pulling and bouncing and tipping the tote). 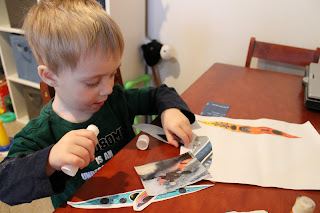 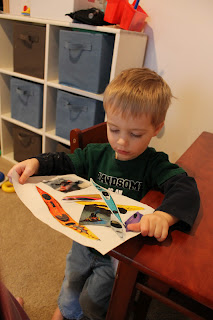 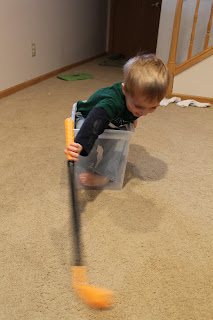 We've been struggling to get Spencer back on track with potty training. Last summer he was showing a lot of interest, but since Ashton came he has backtracked. We've tried incentives (stickers, candy, pet fish). We have lead by example (he's in the bathroom watching us, handing us toilet paper, flushing, etc). We have put him in big boy undies (and cleaned up a lot of messes!). We've listed all his friends who pee/poop in the potty. I think we've tried it all within reason. We are not pushing the issue, just encouraging. I hope some day soon a light will click and he'll just get it. His most recent discovery in our potty training journey is to stand up to pee like Daddy. The other day he pulled the stool into the bathroom to try it out.

Enjoy a video of Spencer jamming out to an Elmo video on my phone. He's obsessed with it!

Posted by The Mahlke Chronicles at 1:27 PM