New Year's Eve is always so anticlimactic for me. It's supposed to mark the end of a year and the beginning of the next. But mostly I'm just tired and want to go to sleep. We enjoyed a nice evening with some friends at our house on New Year's Eve. We even managed to stay up to watch the ball drop....even if we had to DVR it and watch it 7 minutes late because a kid inevitably woke up right during the countdown to midnight. (What would you do without DVR?) I'm not the type to make resolutions, but I have resolved to lose the rest of my baby weight eventually. Preferably before Spencer starts swimming lessons, but that starts in a few weeks, so......

We spent most of the last week of 2011 at home enjoying our Christmas gifts. We made a trip to the Mall of America and visited the underwater aquarium. Spencer absolutely LOVED it. Since his current favorite movie is Finding Nemo, he called all the fish Nemos, Dorries or sharks. He keeps talking about seeing Nemos at the big mall.


We also had some visitors on Friday when we watched our friends' kids, Briella and Bryson. Spencer enjoyed having someone to run around and act crazy with. After only a few minutes, my husband declared we weren't having anymore kids.

The highlight of the week was probably seeing Elmo live in concert. The anticipation for Spencer was too much. He wanted to go to bed early Friday night because he knew when he woke up he'd get to see Elmo. I think it lived up to his expectations, too, because he had a great time. It was nice to leave Ashton at home with Grandma and enjoy some much needed time alone with just Spencer. (Although Ash still hasn't mastered the whole bottle thing just yet, she improvised with a medicine dropper and all was well.) 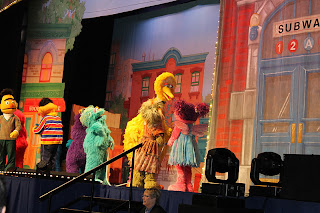 Also this week Ashton had his two month well check. He weighs 12 lbs 9 oz (70%) and is 24 inches long (80%). He has gone down slightly in the charts, but is growing and developing quite well. He got his shots and  then had a rough night. I don't remember Spencer ever reacting badly to his shots, but then again he was ALWAYS crabby and crying, so we never noticed a remarkable difference.

I am a little relieved the holidays are over. I'm ready to get back to our regular lives!! I've missed school and our alphabet projects and the security of our schedule. I think I need our routine as much as the kids.
Posted by The Mahlke Chronicles at 9:43 AM