Oh, how I love you Christmas!

Warning: It's a long one!
We've had a very busy holiday season and I'll be sad to see it come to an end after the new year. In the week before Christmas we did a few more projects. We started by making our first annual picture ornaments. I thought it'd be neat to document each Christmas with a personalized ornament, and what better way than to do it with a photograph? Spencer painted popsicle sticks that I glued together to make the frame. I think the ornaments turned out rather nice! 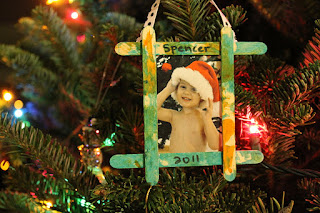 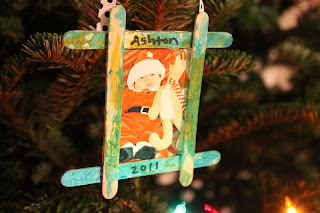 While painting the ornaments Spenc decided he should make some hand prints. He painted his palm and fingers and then flattened his hand onto a piece of paper. I guess I've done too many hand print projects because now he's a pro at doing his own! I couldn't let the hand prints go to waste, so I improvised and turned them into Christmas presents for the great grandparents. They became coupons for a dinner with the Mahlkes. The coupons needed a special package, of course, so we made stockings out of construction paper and slipped the coupons, along with some wallet sized photos from Ashton's newborn photo session, into the stockings. 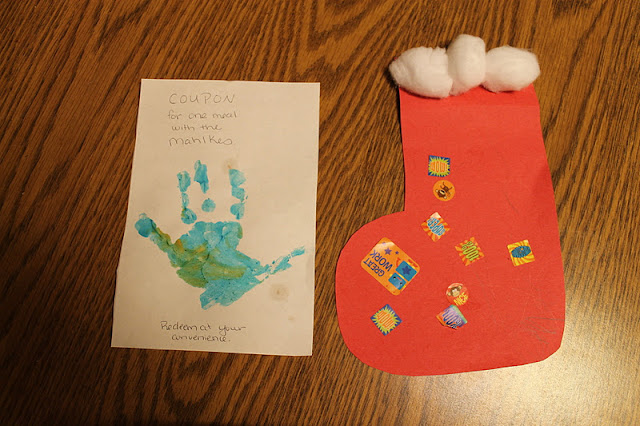 Speaking of great grandparents, the next project was for my Grandma Faye. She recently turned 80 and my aunts asked family and friends to create pages to put in a scrapbook they are making for her. The scrapbook pages are supposed to reflect on our relationship with Grams or what we feel symbolizes her. For my page I did foot prints of my kids and then made a list of 10 Wiggly Reasons We Love Grandma. 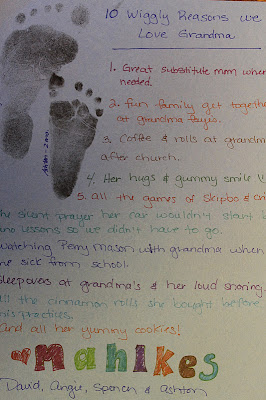 Our Christmas celebrations kicked off on Friday. Great Grandma Mahlke, Grandpa Dave, Barb and her mother joined us at our house for dinner. They all ate up Ashton, and Spenc (once he warmed up to everyone) hammed it up for the audience. Grandpa Dave and Barb gave Spencer a truck, complete with a boat and trailer, that my husband is just as excited about. Apparently he had a similar one as a kid and is jealous at how much cooler Spencer's is. Oh, and I came to the conclusion (again!) that I am very glad I did not continue the tradition of naming my son after his father and grandfather and great grandfather. There are just too many darn Davids!!

We spent Christmas Eve just us four. Egg bake and homemade cinnamon rolls for brunch. Spencer got to open a few gifts throughout the day. Then after dinner he got to open the rest from us before we headed to candlelight church. When we got home Spenc poured "Reindeer Grain" on the deck that we got from school (oatmeal and glitter) and we set out some cookies for Santa. Spencer did not like the idea of Santa getting any of his cookies and decided he needed to take a bite or two out of each one. Once the kids were in bed, David and I enjoyed a glass of wine and watched some TV.
Christmas morning we put a candle in a cinnamon roll and sang Happy Birthday to Jesus. Then it was time to see what Santa brought us. Spencer was not happy that Santa ate his cookies. He kept saying "my cookies" all morning long. Afterwards we made the trek back to my hometown to celebrate at my Grandma Faye's house. It was the first Christmas I've made it home in quite a few years because of the weather. It was nice spending the holiday with my family. We got home in time to put the boys to bed and enjoy a nice glass of wine while watching a movie.

We had one final Christmas celebration on Monday, but it didn't exactly go as planned. In the morning Ashton puked a few times on Dave and was running a slight temperature. He called the doctor's office and spoke with a nurse, who said we should bring Ashton in to Urgent Care. I spent the rest of the morning in Urgent Care just to be told he is completely fine and it's normal (and good) for babies to get sick during the flu season. The doctor was far more concerned with the darn circumcision!! I did learn that my baby now weighs 12 lb 3 oz. Since the doctor didn't seem worried about Ashton, we decided to still go to the Christmas party at my mother-in-laws for the big Smith get together. We headed over early to exchange gifts with the first cousins. Ashton was being fussy and unusually clingy to me, so I figured he still wasn't feeling well. Not too much later my stomach was feeling off, so we rounded up all our stuff and left the party early. Halfway home Dave made me pull over on the side of the road so he could puke. So began the worst night of my life as a mommy. It is not fun having both parents puking sick at the same time. Dave was in charge of Spencer and I was in charge of Ashton. I somehow think Dave was luckier. It took me an hour and a half to get Ash to bed because I had to keep running to the bathroom. My sister and her husband were sick as well, so I am assuming we caught the virus that attacked us at my grandma's Christmas day. Thank you to whoever so nicely passed that particular Christmas present along!! 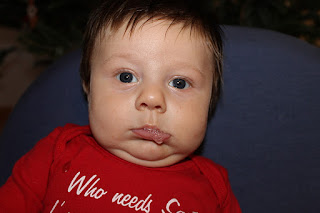 Besides the virus that so violently attacked my family (passing Spencer, thank God!!), it was a great Christmas. Spencer is at a fun age now where he is starting to understand the concept of Santa and really enjoy Christmas. I'm not sure about my boys, but this mommy is exhausted!

Here is the latest growth picture. It's hard to believe my baby is already two months old!!

Posted by The Mahlke Chronicles at 10:49 PM