It's been a little crazy in the Mahlke household, so I'm a bit behind on our letter projects. We spent two weeks on the letter F for two reasons: (1) we just didn't have much time for projects, and (2) there was a lot of things I wanted to do for F. Unfortunately, I didn't get to do them all, but it's time to move on to G.

One of the reasons we were so busy is because Ashton was sick. It started with a stuffy nose....and then landed us in the ER. I took him to the doctor as a precaution. Because he had a low grade fever and "rattly" lungs, they sent me to the ER for further testing. It was a little scary taking my 2 week old to the ER, but luckily nothing serious was wrong. After a few tests and a chest Xray, they said he had an upper respiratory infection, or your basic cold. I made a follow-up appointment with our regular doctor for the next day. She said his lungs still sounded a bit rattly but nothing too serious. She was more concerned about the slight weight loss he had from the day before, so she wanted to see him again the next day. The next day his weight had was stable and the doctor said he was fine. What a scare, though!!

Another reason it's harder to do projects is because of the challenge of balancing two kids! I swear it's more than double the work. Ashton is an angel--the complete opposite of Spencer as a baby. But Spencer is still a handful to this day. He now decided he can't do simple things he's been doing for a long time and he constantly needs my attention. Even when Dave is home to help it's still hard because Spencer only wants me. He's really good with Ashton, but he is having some adjustment issues to his decreased Mommy-time. Sadly, I am running out of patience and I find myself being short with him. I pray this stage will pass soon!

Finally to the letter F....We started by coloring on a fabric softener sheet. I then cut both lower and upper case Fs and glued them onto a flashcard.

We also made a fort under the dining room table. We read stories with a flashlight and drew on a chalkboard. This was cut short when Ashton decided he needed to eat.

We made homemade finger paint and then set up different stations on the kitchen floor. Spencer doesn't like getting his hands dirty, so finger painting the real way is out of the question. Instead we used feathers, cars, real paint brushes and sponge brushes to paint.

The last time we focused on the letter F we did family foot prints. I decided since our family has grown since then that we should do an updated one. I bought canvas stretched across some boards for a fancier picture this time. 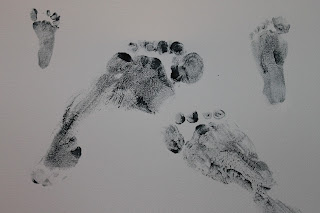 Then here is the photobook picture for F. Spencer really enjoys the photobook. He likes looking through it and answering me when I say, "A is for..."

We visited with family, too. Aunt Katie and cousins Samantha and Hunter stopped by to meet Ashton for the first time. The cousins had a great time playing. 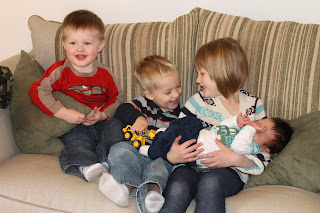 Posted by The Mahlke Chronicles at 9:36 AM