It was two days past my due date when my water broke. Now it wasn't anything like you see in the movies where water comes gushing out in a big puddle. One minute I was laughing really hard at a funny part in a movie, the next we are rushing around getting the last minute stuff ready to go to the hospital. Handing Spencer over to Grandma Amy was a little bittersweet. I knew it was the last time he'd be my baby.

My sisters, Hope and Sheila, drove here to be in the delivery room again. They were with us during the birth of Spencer and I very much wanted them with us again. Sheila documented every single step and I'll share as many of the appropriate pictures as I can.

This birthing experience was the complete opposite of Spencer's. Spencer's was chaotic and a bit stressful. He took his sweet, precious time laboring down, I was sick to my stomach, Spencer's heart rate dropped every time I pushed, the doctor used a vacuum to suck him out, and I was one push away from a C-section. Spencer's delivery was 13 hours, with 2 hours of intense pushing; Ashton's was 7 1/2 hours, with the easiest half an hour of pushing. I literally got to see Ashton being born. I saw the full head of hair pop out, then one shoulder, followed by the next. It was the most calm and amazing experience! The doctor said I made it look easy, but with an epidural and an easy labor, it WAS easy.

Ashton John Mahlke was born October 23rd at 4:03 am (one minute sooner than Aunt Sheila predicted). He weighed 8 lbs, 7 oz and was 20 inches long. His size was a huge shock since I was pretty small and measured under at my prenatal appointments. It was a neat and different experience to be able to hold my baby immediately after birth since I wasn't able to do so with Spencer. I ate up Ashton's 10 very long fingers and toes and enjoyed holding the little creature that caused such a ruckus in our lives 9 months ago. It was an indescribable moment. 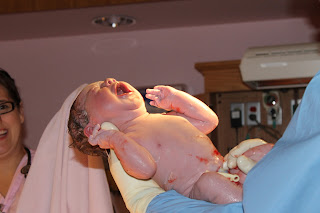 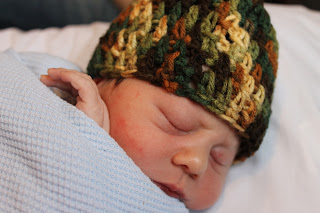 Being home as a family of four has been amazing. It is still a bit tricky balancing my time and attention between a needy newborn and a toddler who is used to his mommy's complete attention. It helps having Dave here to occupy Spencer and allow me the precious one-on-one time with my new baby. Spencer really has taken to his little brother, though. He is always concerned about what he's doing and where he's at. He loves holding him and giving him kisses. He is also a great helper. He throws diapers away and brings me pillows and blankets. He even brought mommy and baby presents from the park the other day--some sticks! 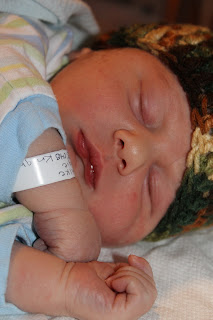 I know there is a long road ahead of us adjusting to this new normal, but I am very excited to get into a new sort of routine with my family of four. Who knew you could love two kids as much as you did one!
Posted by The Mahlke Chronicles at 11:23 AM