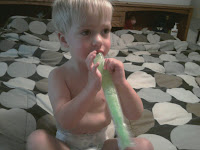 This week we focused on the letter E. We didn't have much time to devote to our letter projects, though, because Spencer was sick. Monday morning he woke up with a 100.4 temperature. He had cold-like symptoms for a while and diarrhea, but never a fever before that point. I stripped off his clothes and gave him a popsicle and some Tylenol to bring his temperature down before bringing him to Urgent Care. The diaper bag was already in the van from the day before, so I didn't bother to look in it. When we got to the clinic, I changed Spencer's poopy diaper. By the small size of the runny poop, I knew from experience there was more to come. The only problem was I only had one diaper. I was hoping and praying he'd wait until the appointment was over before he finished his business, but nothing in the world ever works that way, right? Sure enough, before we were called in to see the doctor, Spencer took the biggest, explosive diarrhea poop!! What was I to do since I didn't have another diaper to change him? Luckily after explaining to the doctor my embarrassing predicament, he found a diaper for me. Lesson learned: when your kid has diarrhea, make sure you pack extra diapers!!! Turns out Spencer just has a virus that needs to work its way out. He has in the process gotten both mommy and daddy sick, too, though.

Our first letter project was learning about erasing. We used pencils to scribble on a piece of paper first. We drew lines and circles and polka dots and traced each other's hands (Spencer giggles because it tickles his fingers). Then we turned the pencils over to erase. Spencer wasn't a big fan of this, though. He preferred drawing over erasing. I cut out upper and lower case Es to make the flash card out of our pencil/eraser picture.

We also learned that E is for Elmo. Spencer absolutely loves "Melmo." We don't watch much TV during the day. I don't even have it on for background noise. But he does get to watch Sesame Street at 8:00. And, yes, he does stand that close to the TV. For an Elmo project, I printed off templates of both Elmo and Big Bird and we glued/taped the pieces onto old toilet paper rolls.

Our final E activity was to explore our neighborhood. I carried a clipboard with a sheet of paper containing items we might see as we walked down our street. Then as we saw the items, I put a tally mark next to them on the paper. We saw a lot of basketball hoops, rocks, houses, boats and leaves.

I had my very last prenatal appointment today. It was a pretty good appointment since my doctor seems to be just as anxious as me to deliver this baby already!!! I am now dilated to 4 cm. He stripped my membranes again and said it should work this time since I am 40 weeks pregnant now (well, technically tomorrow). If for some reason I do not go into labor this weekend, though, I am scheduled for an induction on Tuesday. It is a relief and exciting to know there is an end date now. I can breathe a little easier. I'm very much hoping the little guy will come on his own, but I'm OK with being induced if it comes to that. Dave starts his 2 week paternity leave on Monday. It's all so real now!! I'm having this baby SOON!!!

Posted by The Mahlke Chronicles at 12:05 PM