Cc what a great husband I have

This has been a very long week. Physically and mentally exhausting. Early Monday morning my childhood best friend lost her battle with cancer. It was something we all knew was coming, yet it didn't make the actual event of her death any easier to handle. She was 29 years old and had a lot of life left to live. She recently celebrated her son's 4th birthday in the nursing home where she spent her last days.

Wednesday after my doctor appointment I headed back home for the wake and funeral. Dave took off work to stay home with Spencer. He said it's hard work being a stay at home dad and had to go to bed early. Although it was hard saying good-bye to Annie, it was good to see so many old friends and family, and to share our memories of Annie. It took a toll on my body physically, though, and I now have no ankles. I am very swollen and uncomfortable and very ready to have this baby. 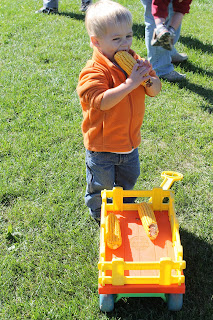 To keep myself busy prior to the funeral, Spencer and I still lead our normal lives, including the letter activities. To start off the letter C, we took a field trip to a Corn Maze. Spencer got to pet some animals at the petting zoo, watch pigs race, go on a hayride and ride in a wagon as we tried to navigate the "small" corn maze. Luckily, we ran into some nice workers and they guided us out of the maze. Who knows how long we would have been wandering around in the corn field otherwise. Neither my husband or I are very good at maps. 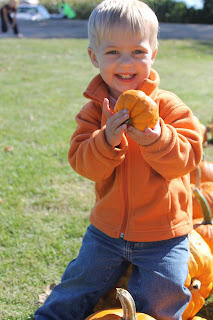 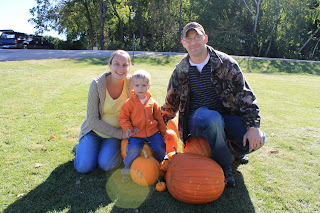 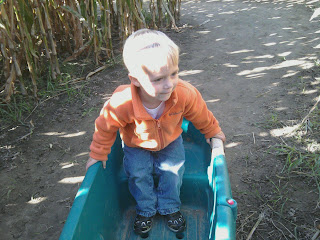 Spencer colored with Crayons to make the Cc flashcard.

Our final project was to make a numbers photobook to help with counting. I took pictures of his stuff and Spenc had fun helping me print them off and add them to the photo album. 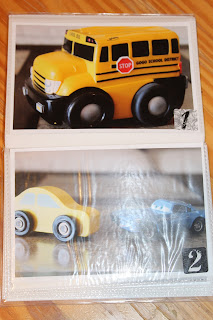 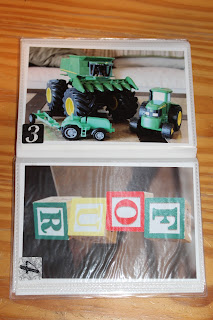 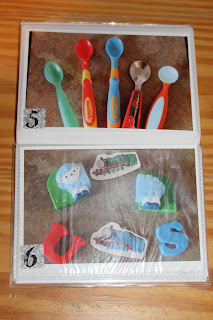 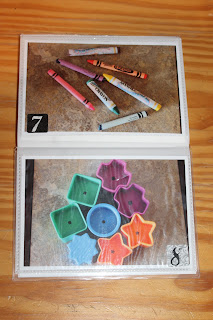 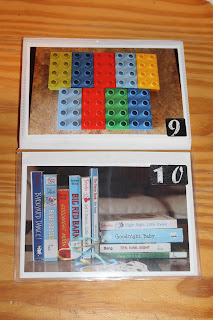 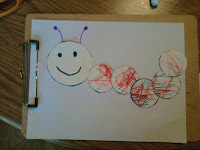 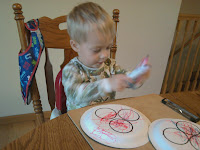 While I was gone, Dave did a project with Spencer, too. He came up with the idea all by himself to make a caterpillar out of paper plates. First Spencer colored on them with markers. Then Dave cut out the circles and Spencer helped glue them onto a sheet of paper. Dave said he was very crazy with the glue stick.

Besides doing a letter project, Dave kept Spencer very busy. They went to the park a few times and threw rocks into the river. But Spencer's very favorite activity was when daddy brought him to see the tractors at the implement store. The workers let Spencer sit in the tractors and even start a combine. They were nice enough to give him a few catalogs to take home, too. Dave said that Spencer spent a long time looking through the catalogs, pointing and saying "big tractor, little tractor." He also got to see the field across the street being combined. Every time the farmer came by, Spencer would wave really big and the farmer would wave back. The kid is obsessed with tractors!

When Spencer was whining this morning before school, Dave was quick to point out that Spencer didn't whine the entire time I was gone. Who would be crabby when you're spoiled by daddy? I put Spenc in a timeout and informed him Boring Mommy is back. ;)


As I said earlier, I had a doctor appointment on Wednesday morning. I have not progressed any further than last week. I am still dilated to 2 cm and 50% effaced. I was slightly relieved to hear this since I was concerned about going into labor while I was away from my doctor and hospital and husband. I also learned I gained 4 pounds in one week!! I know I've been eating a lot lately, but that's a lot of weight to gain in one week!! I'm hoping to have this baby within the next week, but I have a feeling the little guy is pretty comfy in the Mommy Hotel and it could be a while yet.
Posted by The Mahlke Chronicles at 1:43 PM