T is for all of Spencer's favorite things!

To decorate a big letter T, Spencer first stuck pieces of tape down and then painted. He used both paint brushes and an eye dropper from an old vitamin bottle. He's getting the last of his eye teeth, so he's back to the baby stage of putting everything in his mouth. He wanted to chew on the eye dropper instead of paint with it. Once the paint dried, I peeled off the tape. 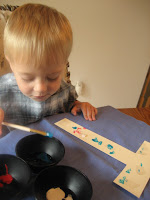 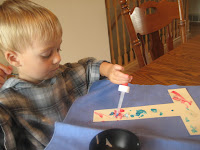 Over the course of the week we made a handful of trains. Spencer's birthday party is this weekend and the theme is trains, so we used these trains as party decorations. Here are two of the trains:
I also made a train out of old boxes, some yarn and a Popsicle stick. Spencer loved this! He spent most of the afternoon finding things to put into the train cars and then he pulled the train around the house. 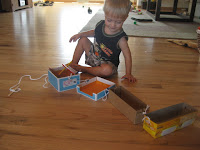 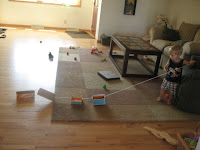 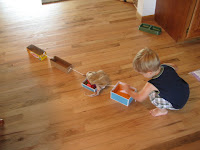 Our final project was to make a tractor out of a letter T. Spencer didn't have the patience to create the tractor. He just wanted to play with it. 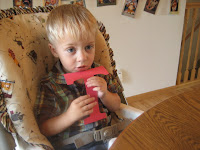 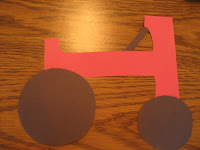 News on the pregnancy front.....we got the baby's room put together. Some old stuff and some new stuff. Spencer now has a big boy room, except for his crib, since a majority of his stuff was moved to the baby's room. We aren't quite ready for the transition to toddler bed just yet. The baby weighs in at about 2 1/2 pounds and is 15 inches long. 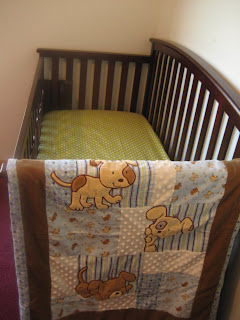 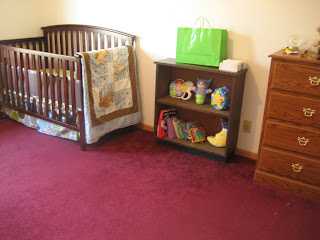 Posted by The Mahlke Chronicles at 8:08 PM