P is for Parks, Picnics, Pools, and a whole bunch of other crap 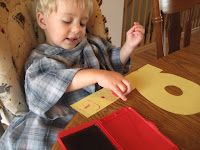 We started the letter P at a bad time. Besides being super busy because of the holiday, my computer had the unfortunate luck of being struck by lightening. I went two very long weeks without a computer! Because of these reasons, we extended the letter P out to two weeks.

Of course we decorated our standard big letter P, but the weeks really revolved around a Park Tour. We went to as many parks as we possibly could, and then marked them in a small paper Passport (compliments of the local library's reading program as a prize for reading 15 minutes a day). After each park venture, we used a plastic magnet P as a stamp and recorded our visit. In the two weeks, we visited 8 parks. One park visit was an indoor park substitute at the Apache Mall in Rochester since the weather was too dang hot to be outside. We also had two picnics at a few parks, one w/ Daddy and the other with some families from Grace Place, where Spencer enjoyed feeding the ducks. 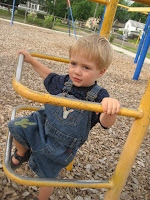 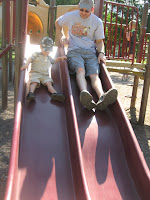 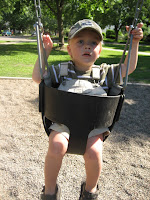 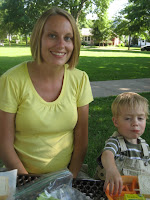 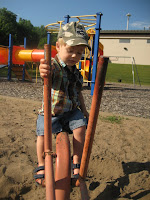 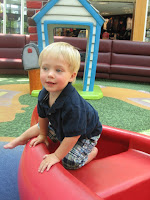 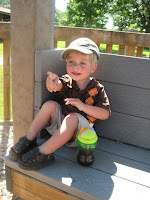 Besides the Park Tour, we also had a Pool Party with one of Spencer's best buddies, Briella. 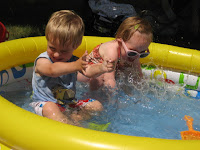 We also planted flower seeds when I babysat Spencer's other best buddy, Jackson, with the help of big sissy, Julia. 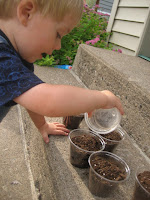 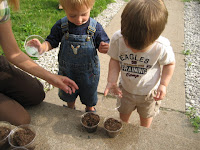 Not only did I get to babysit Jackson, but I had the great pleasure of watching my friend's baby twice!! I loved having a baby in my arms again. I didn't get near enough cuddling time before Bryson's mommy picked him up.

We also continued to focus on becoming comfortable on the potty. Every morning after breakfast, I sit Spencer on the potty while he brushes his teeth and takes his vitamins. Then he insists I read him the same two potty training books. In that time, he usually tinkles. If he pees, then he gets lots of claps and cheers and high fives and the distinct pleasure of flushing the toilet. He has pooped in the potty once, but I think it was on accident. He still isn't quite ready for the full-fledged potty training just yet. He doesn't really seem to know when he needs to go to the bathroom and he definitely doesn't mind if he sits in a dirty diaper all day long. On a few occasions he has admitted to making a stinky, but those instances are very rare. We're taking it slow and listening to his cues for readiness. Soon....maybe....hopefully? 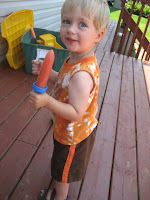 On the pregnancy front, I had a prenatal appointment last week. Everything is measuring right on track, even my weight gain!! I gained 5 pounds since the last visit, which I thought was good since I've been eating a bunch of junk constantly. When my husband objects to my snacks, I say it's for the baby. The baby is about 13 1/2 inches and weighs a pound and a half.

Posted by The Mahlke Chronicles at 1:29 PM