No time for N!

This week was super busy. We barely had time for any letter projects. We hit up Toddler Tuesday at the Marine Art Museum, where Spencer got to do some projects and play with a bunch of kids his own age. We visited the Steamboat Days carnival and ate some yummy food. We walked around the lake a few times and played at some parks. And, finally, we went to the kiddie parade and free concert in the park. Yet....we still squeezed in a few projects somehow. 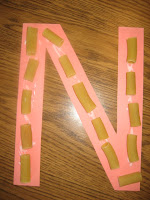 This week was the letter N. We started by gluing noodles onto a big N. My husband made a smart remark about how the noodles are all arranged in a perfect line, and I want to confirm for the record that Spencer did put most of them in a nice, straight line....but then I helped with the rest. 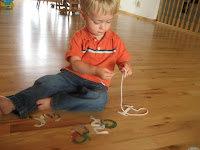 We dedicated the week to learning numbers. I cut out numbers from an old phone book, punched holes in them, and let Spencer string them onto a piece of yarn. I then hung the number string on the wall. Sadly, the 9 did not make it. I also checked out a Baby Einstein numbers DVD from the library. Since Wednesday was rainy and crummy outside, we watched the movie. Spenc made it to the number 6 before growing bored and restless. We've been counting things for a while, but I amped up the counting this week. Hopefully soon he'll know more than the number "free." 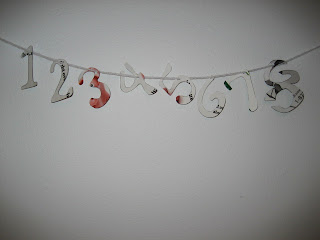 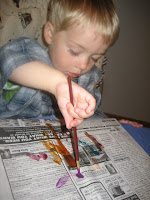 Finally, Spencer painted on newspaper. Once it dried, I cut around the painted portion and hung it on the door by the rest of his projects. 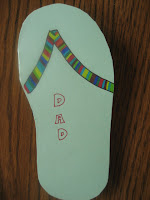 Since this weekend is Father's Day we devoted some time to making him a card. The left inside of the shoe is a poem that says:

Here is my little footprint
One day it will fit your shoe
I watch what you are doing
Because, Daddy, I want to be just like you. 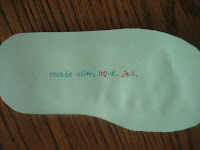 He also made a card at playgroup last Sunday with friends while Dave and I were at a Twins game. 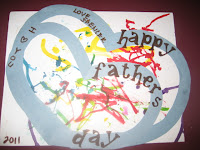 To celebrate Father's Day weekend, we are spending Saturday at Oxbow Park with some good friends. We'll see animal feedings, visit the zoo, play at the park and have a picnic. Then we'll have a BBQ at the friends' house for supper. Sunday is all about Daddy! He wants to eat at Famous Dave's, so after church we will eat some yummy food for lunch. For supper he wants to grill big, fat juicy steaks and eat some pumpkin bars.

The little baby in the Mommy Hotel is about 11 inches and 1 lb. Apparently, he looks like a miniature newborn. Everyone keeps saying I barely look pregnant, so I pulled out my Belly Book from Spencer's pregnancy to compare. At 22 weeks with Spencer, I was a lot smaller than I am now. Give it a few weeks; I'll be huge soon enough. Bring on the cankles!!

Posted by The Mahlke Chronicles at 1:22 PM