I is for Ice and Icky Insects

I would just like to start the post by saying that I had a very nice Mother's Day. I am so lucky to be a mommy; it definitely is my favorite job in the whole world! I always knew I'd like being a mom, but I never understood just how much I would truly love it until Spencer came along. My lovely husband let me sleep in until almost 10:00!! We ate lunch at BBQ joint and then went to a park to play. Spencer loved going down the side-by-side slide with us. He laughed and laughed. Then we ate the cake Dave made for me and I opened my cards. 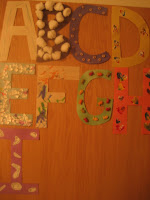 This week was all about the letter I. We glued Icky Insects onto an I. Then we ran (yes, ran) to Spencer's room to tape it on the door by the rest of the letters. Spencer is still a bit too young to really understand our letter projects, but I still try my best to explain them to him. After each letter activity, we tape the letter onto the door and I point out the past letters and I sing the alphabet song to him. For some reason, the letter G really stuck out in Spencer's mind. He'll randomly point at his door and say, "G, G, G." He won't say it when prompted, though, nor will he say the other letters either. I guess he really enjoyed the goldfish and grass projects during the G week!! 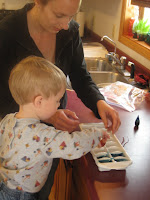 Our next project centered around ice. Monday I filled an ice tray with water and Spencer helped mix in food coloring. Then partway through the freezing process, I added popsicle sticks. Tuesday Spencer painted a picture of an insect with the colored ice sticks. He seemed to really enjoy this for about 5-10 minutes and then just wanted to feed me the ice instead.

Here is a video of Spencer ice painting.

We had plenty of opportunities to play outside this week because the weather was finally nice!! Just in time for some ice cream cones and icees.

Coincidentally, this week's ECFE theme matched our letter: insects! So Spencer painted an insect, created a lady bug, played with big plastic insects in the sensory table and sang about spiders during circle time. All week long at home we've been singing The Itsy Bitsy Spider, so he was pretty excited to show off his skills at school.

On the pregnancy front, my baby now weighs about 5 ounces (think of a turnip) and is 5 inches long. My friend loaned me her Doppler and it's been neat hearing the heart beat whenever the desire arises. This morning I made the mistake of trying to listen to the heart beat right after breakfast. I guess the cold milk and sugar is not a good combination if you want your baby to sit still long enough to register a heart beat on the Doppler!! I swear he was doing summersaults. 18 days and counting until we learn if the baby is really a he...or a she!!
Posted by The Mahlke Chronicles at 1:02 PM