I feel like we are finally getting a routine established and I can honestly say that I do love staying home w/ my baby. It got off to a bumpy start (mostly because I was preoccupied and a bit stressed about the pregnancy issues), but now I feel we are on the right track. Before I slept until my Spencer-alarm woke me up. Now I'm setting an alarm, so I can have a little "Angie-time" before he wakes up. I set the alarm for 6:30 this morning, but that just isn't early enough apparently. Tomorrow I'll set it for 6:00. This is still sleeping in for me since I woke up at 5:15 am when I was working. Here is how our weeks go:

Monday mornings we go grocery shopping. I love, love, love Hy-vee at 8:00 am!!! There are no congested aisles or long lines at the registers. We're in and out within a half an hour! Monday afternoons we do some sort of project/activity. Monday nights we go to Evening Song, which is a parent/toddler class where we sing and dance.

Tuesday mornings we go to story time at the library and check-out a bunch of books to last us through the week. The afternoons are filled w/ projects and activities.

Wednesday mornings are usually pretty lazy since we don't need to get moving early. Wednesday afternoons we go to an ECFE-led drop-in playgroup at the elementary school, depending on what time Spenc wakes from his nap. (Who plans toddler activities from 1:00-3:00 in the afternoon?!)

Thursday mornings are usually dedicated to running errands. Thursday nights we have an ECFE class. During this class the parents and kids separate after free play and circle time, which was an issue w/ Spencer at first. Now he doesn't even seem to notice when I leave. He loves it!

Friday mornings we have another ECFE class. This one is targeted specifically for 12-24 month olds, so we do not separate. Spenc does a lot of art projects that adorn our kitchen closet door for weeks. We do circle time (which Spenc thinks is his spotlight time, where he'll dance around in the middle of the circle, hamming it up, instead of sitting nicely on Mommy's lap like he's supposed to) and sing songs. But his favorite part--which he is too antsy to sit through snack time anymore--is the gym! Friday afternoons are up in the air since David has Fridays off. Sometimes we have plans with him, depending on whether he has an appointment at the Minneapolis VA.

Last week was all about the letter C. We started the week off by making a list of all the C things we could think of (OK, so I brainstormed while Spenc colored all over the page). This list is what we based our projects and activities around for the week.

We decorated two large Cs. The first one Spenc glued on Cs I had cut out of magazines. 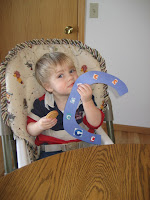 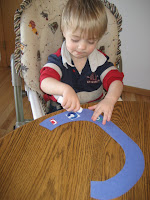 For the second C, I put down dots of Elmers glue and Spencer Cheerios on top. 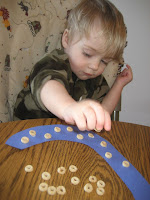 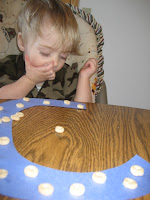 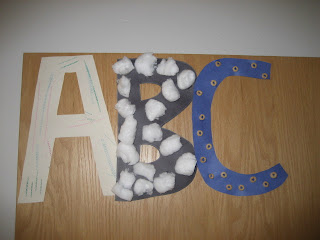