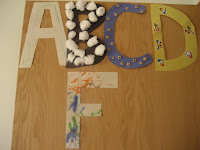 This week we skipped over E and focused on F. We will go back to E next week. I wanted to save it for Easter week. I have been very excited to do the letter F for a while. I have to give credit to another mommy for a lot of the ideas from this week and other other weeks. Thanks, Autumn!! 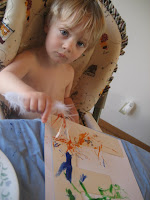 We started by using a Feather to paint a large letter F. Then since Dave was home and the paints were out, we went ahead and did our Family Footprint Portrait. We painted our feet blue and then pressed them onto a piece of poster board. Once the new baby comes, we'll do it again for a more up-to-date picture. 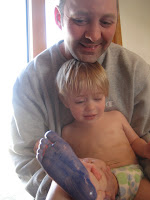 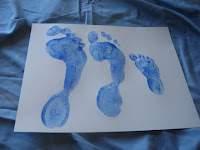 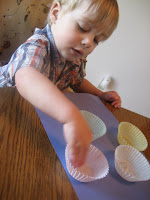 Later in the week we made Friendship Flowers for Spencer's two best buddies, Briella and Jackson. This entailed gluing muffin cups onto construction paper and drawing the stems. Spencer colored on the manila envelopes before we stuffed the pictures inside and delivered them to their mailboxes. 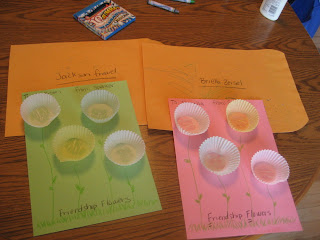 We also tried playing a game of Follow the Leader, but after jumping and spinning and walking sideways, Spencer grew tired of the game.

Our last F activity was to document Spencer's Fingerprints. The only issue with this is he absolutely hates icky substances on his hands, so this was challenging and it didn't turn out the way I envisioned.

Ironically enough, the baby germinating in the Mommy Hotel has formed his/her Fingerprints now--right on schedule, apparently--and he/she is the size of a medium shrimp (3 inches).

Also this week, Spencer got a Big Boy Haircut. He has had a handful of haircuts already, but I've been hesitant to age him by getting his hair cut super short. He looks so old now!!! Even people at his school said they wouldn't have recognized him if I hadn't been with him. I thought it was easier to cut it short and not have to put Spencer through the torture of another haircut anytime soon. He absolutely hates haircuts!! He cries and screams and tries to crawl out of the chair.

Here is a video to enjoy of David trying to get Spencer to jump like a bunny. He hasn't quite mastered lifting his feet off the ground when he jumps yet.

Posted by The Mahlke Chronicles at 12:19 PM