I had been anticipating this new gig as a SAHM for months. I visualized all the fun things we'd do--classes, playgroups, projects, activities, etc. Then the time actually came and it was a huge awakening. This is hard work!!! My husband and I both sat at the kitchen table tonight eating supper exhausted. He gave me a look like he had a right to complain since he "works." I told him I'd slap him upside the head if he said what I do all day isn't "work" too.

This is week 3, and we are slowly adjusting to our new normal. Last week was completely out of whack for a few reasons: (a) Spring break meant no ECFE classes or playgroups; (b) the awful flu hit my house HARD. Needless to say, there were days where we did not get out of our jammies or leave the house. I am glad to say that week 3 is definitely off to a better start than week 2. Today, for instance, we finally made it to story time at the library! It was such a nice day that we also went for a short walk. Then we did our first B project (I will post about that later). Tomorrow we have an ECFE playgroup and special visitors: Grandma Keeha and Great Grandma Faye are coming for supper.

I never thought I'd miss the routine of a 8-5 job, but I never realized just how much a part of me it became. Once I no longer had to stick to that schedule, I felt almost aimless. And some days when Spencer is at his crabbiest and clingiest, I really could use a federally mandated 10 minute break. But nothing beats seeing the excitement on my son's face when he perfects the word "ball" and says it over and over, pointing at all his balls....or any other such event in his life. Isn't it the little things that make everything else inconsequential?
Posted by The Mahlke Chronicles at 6:36 PM No comments:

I am now officially unemployed. So begins the next chapter of my life. After much deliberation and serious debate, my husband and I have decided that I should test drive the whole SAHM (stay at home mom) thing for a bit. Try on the role, see how it fits. It wasn't an easy decision, believe me!! I changed my mind about a bazillion times before finally deciding this was the right decision. Once the decision was made (and the long, drawn-out process of actually "losing" my job was over), it was time to say good-bye to a very special person in our lives: our daycare provider, Krista. She has been so instrumental in Spencer's development since he was 3 months old and really became an extended member of our family, especially for Spencer.

So how do you say good-bye to such a special person? With a homemade card (and envelope), of course. 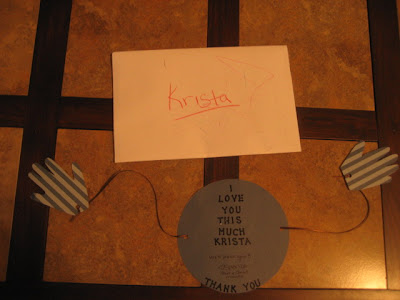 It is now the end of SAHM Day 2, and I'm tired!!! It doesn't help that both Spenc and I are sick. We've mostly just bummed around in our pjs forgoing most of the activities I had planned. We did, however, manage to do a project today. I am introducing him to the alphabet and this week is A.

Here is Spencer coloring an A that will later be strung together with all the letters and hung above his table in the family room. 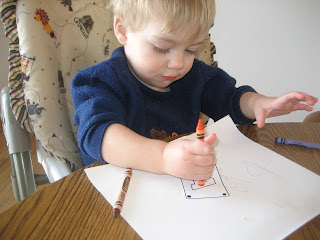 Spencer is helping mix the "glue," which is vanilla pudding. 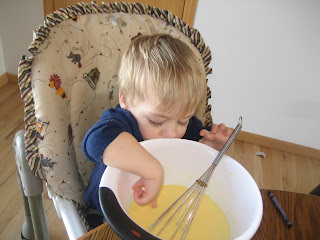 I wasn't prepared for the project and didn't have all the necessary tools. I thought the whisk would suffice as a paint brush, but it sucked. The goal was to paint the "glue" onto the paper traced with upper and lower case As. 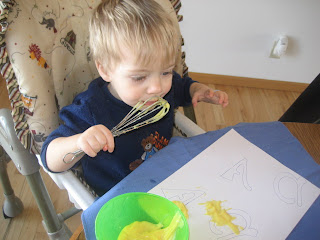 I also didn't have a container for the "glitter," which is the powder from instant Jello, so we just poured it right from the bag instead. 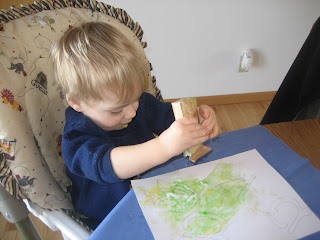 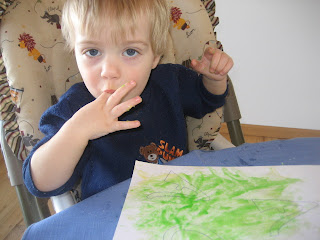 I decided to try another route on picture #2 and used a Q-tip as a paint brush. It worked slightly better. 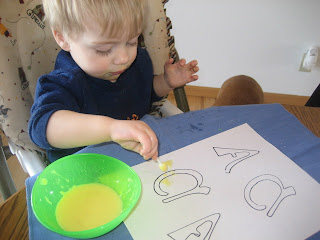 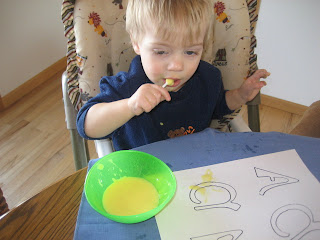 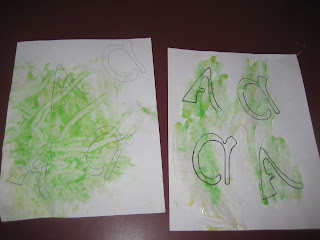 Lessons learned: Be prepared, know how to improvise and make the pudding slightly more runny than directed so it's not as thick of a glue.

The project was a nice distraction to the day. After that Spenc entertained himself by running into the guest room, closing the door, opening it, running out into the family room to yell, "hiiiiii!!" and then doing it all over again. I get the hint, kid, you're bored at home. Tomorrow we're off to the elementary school for an ECFE drop-in playgroup. Yippee!!
Posted by The Mahlke Chronicles at 9:02 PM No comments: